The story of Mas de Daumas Gassac is one of vision, enterprise, passion and pride.

When the Guiberts first purchased their farm (the mas) in the charming Gassac valley they little realised that they had a particular micro-climate which would give them the potential to make great wines. A visiting professor from Bordeaux, one Henri Enjalbert, identified a particular red soil that was common to certain great estates in the Médoc and Grand Cru Burgundies. Under the thick garrigue scrub and shrubs covering the Arboussas hills, he found some 40 hectares of perfectly drained soil, poor in humus and vegetable matter, rich in mineral oxide (iron, copper, gold etc). Formed from deposits carried in by the winds during the Riss, Mindel and Guntz glacial periods (ranging from 180,000 – 400,000 years ago) the terroir provides the three elements necessary for a potential Grand Cru: deep soil ensuring the vines’ roots delve deep to seek nourishment; perfectly drained soil ensuring vines’ roots are unaffected by humidity; poor soil meaning that vines have to struggle to survive, an effort which creates exceptionally fine aromas. Rock, scrub and tree clearing began in 1971 and the first vines, principally Cabernet Sauvignon, were planted on the 1.6ha plot. 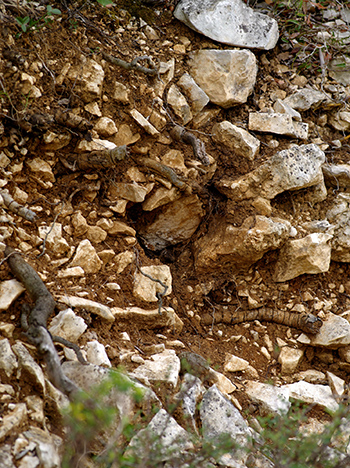 Soil is only one element in the cocktail that makes Gassac the great wine that it is. You only have to stand in the vineyards to engage with the subtleties of the micro-climate. The hill is thick with garrigue; strong warm scents of wild herbs imprint themselves in the air; the quality of light is fantastic. The vines are planted in small clearings, magical glades hidden in the dense, forest-like garrigue. The complexity of Daumas Gassac wines derives heavily from the scents of myriad Mediterranean wild plants and herbs:  bay, thyme, rosemary, lavender, laburnum, fennel, wild mint, lentisque, strawberry trees…

It’s all part of the ‘terroir’ effect, a combination of soil, climate and environment that sets one wine apart from another, sadly an effect that is lost in modern monoculture, where huge areas are cleared of all vegetation except vines. At nightfall, the cold air from the Larzac (850 metres above sea level) floods into the Gassac valley, with the result that, even in the height of summer, the vineyards benefit from cool nights and moderate daytime temperatures. The northern facing vineyards accentuate the beneficial effect of this cool micro climate by ensuring the grapes are exposed to less direct sunshine during the hot summers.

“Respect” is the watchword of the domaine. The Guiberts are intent on producing authentic wines, wines that honour the unique terroir of the Gassac valley.

This respect involves the desire to preserve the wild beauty of the upper Gassac Valley and to avoid destroying the garrigue forest and doing this by creating small pockets of vines, that stand as clearings in the immense garrigue forest that dominates the landscape. In total, there are more than 50 of these clearings, resulting in 50 hectares of vines among 1000 hectares of Mediterranean forest. 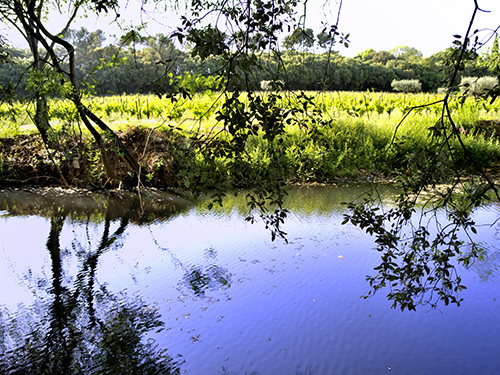 The huge garrigue forest that surrounds the Gassac Valley provides the right conditions for a variety of birds and insects in an ecosystem that functions perfectly, regulating, in the process, the numbers of predatory species. One of the tasks at Gassac is thus to respect this subtle balance, which contributes to the complexity of the wines, without making the slightest concession to chemical fertilisers or synthetic substances.

Like its domaine red brother the varieties for the Mas de Daumas-Gassac Blanc come from old uncloned collections. Four varieties make up 90% of the white grapes: Viognier, Chardonnay, Petit Manseng and Chenin. The proportions change according to the vintage. The cuttings were originally gathered by Aimé Guibert from some of the best-known properties in their respective regions:

The balance of the grapes comes from fourteen rare varieties. For example, Neherleschol, an Israeli grape variety grown on the Golan Heights, would have been the source of the biblical wine in the miracle of the Wedding at Cana.

Aimé Guibert also travelled to Armenia to obtain the varieties used to make the legendary wine that was appreciated by Alexander the Great.

In the 2019 vintage the blend was thus: 32% Viognier; 19% Petit Manseng; 18% Chardonnay; 14% Chenin Blanc with 17% comprising Bourboulenc, Petit Courbu, Muscat Ottonel, Muscat Petit Grain, Muscat of Alexandria, Gros Manseng, Semillon, Neheleschol (Israel), Amigne (Switzerland), Sercial de Madère (Portugal), Khondorni and Tchilar (Armenia), Albarino (Spain), Falanghina, Fiano and Grechetto from Italy. For Gassac, these lesser-known varieties are part of an archive. They also show the versatility of the place, or rather that the place makes the Grand Vin.

The grapes for the white were harvested at the beginning of September to conserve freshness and acidity. The juice was macerated with the skins for 5-7 days, before a three-week co-fermentation in stainless steel tanks in the cellar cooled by the local mill stream. The wine was then matured for a further 2-4 months in stainless steel tank.

In its earliest phase the wine is aromatic and fruity. At this point the Viognier is more dominant with its perfume and flavours of grapefruit, pears and fresh herbs. In its secondary phase (after three to four years) the magic starts to happen, the fruitiness dissipates somewhat to be replaced by notes of honey and dried fruit, marmalade, hints of marzipan and gently nutty oxidation.

*Note: We are still open for business, doing deliveries, and keen
to help everyone with their booze needs in this difficult time.
Natural wine lovers can visit our online shop and order online!

News of the Wine Newbies

The Ethos of Taste