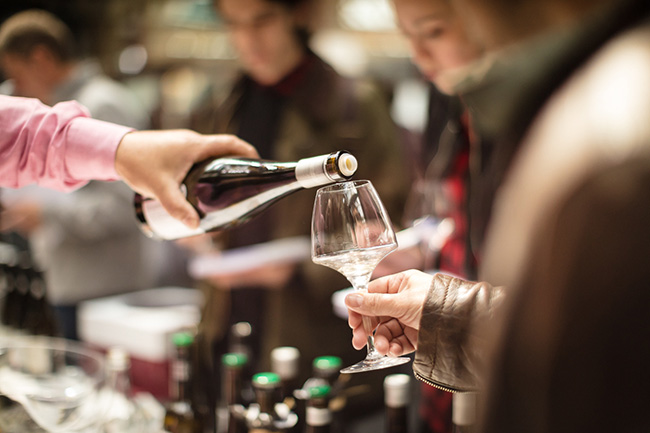 “There are thousands of wines that can take over our minds. Don’t think all ecstasies are the same!”  ~ Jalaluddin Rumi

What is it about fermented grape juice that excites our fancy and exalts our language? Wine is a drink that is talked and written about in a way that is out of all proportion to its humble origins as grape bunches dangling from vines that climbed up trees. Mankind has adapted fermented grape juice into a shapely form, and adopted wine into its culture over the course of several thousand years. Wine has become part of the religious, social and aesthetic discourse. And it is part of a never-ending discussion about the nature of taste itself.

I have been drinking wine for over thirty years. When I began my relationship with wine, I saw it as a quasi-sophisticated social drink. There was a ceremony attached to it with regard to the service in the restaurant, a code that needed to be learned and an appreciation that had to be manifested in the right way. Even the filthiest £2.99 Frascati was shrouded in mystery and ordering a bottle of it in an Italian restaurant was akin to participating in a masonic ritual. Bottle, label and cork were bell, book and candle. Over the years, I stopped drinking and started tasting. My tastes developed and, I hope, became more sophisticated or discerning. I have learned to understand what I like, what I like about it, and why I like it. And although I have changed as a person, part of me still hankers after the state of innocence when every taste of wine, no matter the quality, was rich in unknown meaning. Having said that, because I know myself better now and can gauge my needs, I am drinking better, and finding wines that still stimulate my emotional pleasure centres – for want of a better expression.

This book (this will hopefully become a book) will explore tasting in the round by coming at the subject from various angles. To mix some metaphors. It will not be a primer on how to taste a wine and squeeze the maximum out of every drop, nor will it be a scientific analysis of how we taste as individuals as so many books have addressed that subject already. Instead, it will focus (with reference to the experience of several tasters) on everything that occurs during the process of tasting from expectation of pleasure to recreated memory, from the physiological to the neurological, and describe the very nature of wine epiphanies, those moments of revelation that transport us to another place and into an altered state of mind.  These taste epiphanies are not exclusive to wine, of course, but they often provide the catalyst for intense experiences by triggering powerful memories. Unlike a primer, also, this book will aim not to explain away tasting, but to add layers to it, if anything to make the subject cloudier than clearer. There are so many wine books that seek to simplify, to tell you how to taste, and what wine should taste like. This is not one of those.

For oft, when on my couch I lie
In vacant or in pensive mood,
They flash upon that inward eye
Which is the bliss of solitude;
And then my heart with pleasure fills,
And dances with the daffodils.

There is a cartoon with a pinstripe-suited man standing in front of a slot machine offering Epiphanies: Now in 6 Yummy Varieties! Blinding Flash; Gradual Dawning; 2 x 4 To The Head; Warm & Fuzzy; Eastern/Mystical and Cartesian/Cerebal.

The notion of epiphany originally referred to insight by means of divine revelation, a flash of enlightenment on one’s personal road to spiritual or intellectual Damascus. It was conceived of as external, unbidden, God-given. Although I rather prefer the grounding image of the 2 x 4 to the head.

Today, we use the word more liberally – and without reference to its religious origins – to connote any moment of rare insight, particularly one that materially alters previously-held opinions.

The word’s secular usage owes much of its popularity to James Joyce. The Joycean epiphany has been defined as “a sudden spiritual manifestation, whether from some object, scene, event, or memorable phase of the mind ­- the manifestation being out of proportion to the significance or strictly logical relevance of whatever produces it.”

Epiphanies involve a powerful recognition of beauty. From Joyce: “when its whatness leaps to us from the vestment of its appearance the object achieves its epiphany.” In Stephen Dedalus’ theory of aesthetics in the Portrait this whatness, the third quality of beauty, is referred to as the object’s essence… Stephen’s transfiguration on Dollymount Strand then is an exemplary instance of a Joycean epiphany. All the composite parts are connected to complete the whole; the mythological Daedalus has flown the labyrinth; the messianic figure of Stephen has been baptised; the artist has realised his vocation and the human being within achieves the freedom of a life without shame or wantonness. Joyce achieves what Aquinas said are the three requisites for beauty; integrity, wholeness and radiance, which brings us the moment of epiphany.

How does this transcendent aesthetic apply to wine appreciation? It is not difficult to accept the idea that wine – like art – is capable of provoking and eliciting exalted human responses. The resultant epiphany coalesces around a particular (unique) moment in time and the person who experiences it, to create a sense of “wholeness.” Although I will discuss the science and neuropsychology of tasting later on, I will also suggest that the substance of wine itself merits its sacred status as a powerful catalyst for epiphany.

As much as some would like to believe they are, professional tasters are not finely-calibrated disinterested tasting engines.

As human beings, we are rarely entirely switched on – or switched off – when we are tasting and experiencing wine. We are also the product of a wine tasting education and an aesthetic culture, which gives us clear signposts to follow in terms of making value judgements.

For all that, there are ways to taste. One is to be a passive taster, as clay to be imprinted on, to receive sensory data and to describe it in an objective way as is inhumanly possible.

Full many a thought uncall’d and undetain’d,
And many idle flitting phantasies,
Traverse my indolent and passive brain,
As wild and various, as the random gales
That swell and flutter on this subject Lute!

Another is to open oneself up to experience by subjugating one’s ego, thus to reach out through an act of imagination and a generosity of spirit, to experience in the round.

A third is to train oneself to focus intently, to concentrate and absorb impressions, so that one is able to extract the maximum from the experience.

Wine tasting is not an absolute science, nor purely a “felt” experience. Certain cold arbiters might try to infer a series of scientific explanations to account for our wine epiphany, reducing each experience to the electronic messaging level, describing it in terms of the activation of neural networks, the means by which different parts of the brain send cues to, and retrieve information from, other parts of the brain. There is a prevailing scientific view that humans are similar to computers which have had different information (experiences) programmed into them. Meanwhile, each wine is no more mysterious than microbiological-and-chemical cause-and-effect. Therefore, our every reaction to each wine may be circumscribed by an easily-explained, solid scientific framework. The epiphany as an excess of neurones firing at a given time in the cerebral cortex, perhaps.

For those of a less calculating disposition, an epiphany is more of a religious or a quasi-religious revelation, which results in a kind of conversion and consequent radical change of viewpoint. Powerful feelings are engendered, rather than perfectly-articulated renditions of an experience. Words will not cut the mustard…

The strength of such emotional responses is often the product of surprise. The element of blindsiding, where the recipient feels a detonation within, of joy taking one unawares, the childlike glee of being tickled in places that you scarce knew existed. Misrule, or more properly, the abrogation of will, lies at the heart of many an epiphany, somewhere between an illicit pleasure and a sense of innocence reclaimed. Chefs such as Ferran Adria and Heston Blumenthal would play on this desire to reclaim one’s childlike sense of wonder with sensory gastronomic surprises.

Someone will describe their epiphany as if they were suspended in a moment of frozen beauty. The special setting, the weather, the wine, the food, that unique instant in time when everything seems to touch everything else.  A response where cerebral melts into warm and fuzzy, where, because everything is in its place (as far as we are concerned), the universe seems to make some sort of sense.

We can understand, of course, that the alcohol in wine lubricates the process. Imbibing leads to the dissolution of various inhibitions and sometimes to intoxication in a poetic sense. We’ll take the physiological intoxication for granted. There is the immersive element of an epiphany where we are completely involved in the moment or the experience. These may be the kind of experiences which we feel most deeply and through which we truly live (erlebnisse). Wine, when it is experienced fully, can touch us deeply, and trigger a variety of different emotional and orphic responses.

There are moments when you drink a wine that become hand-wringing, bell-ringing events; transcendent moments that palpitate the nerve-endings and lodge in your memory cortex forever.

When we post about an experience on Instagram, Twitter or FB, the experience is flattened out. No #hashtag, after all, can hope to resurrect the quality of the sublime. I have drunk a few wines recently that have stirred the butterflies of the imagination and made me wonder how a wine has this endless capacity to make us reach inside ourselves. This consideration begs a lot of questions, many of which I pose later, without answers at this stage, although some of the questions have answers implied in their very phrasing.

Not every wine epiphany is to do with a single bottle or moment. Certainly, we may be privileged to experience the instantaneous flash-of-lightning revelation, but there is also the slow dawning kind, the sensation that the clouds are parting and that there is more to be understood. This is kind of expergefaction, a gradual awakening or an intimation of the state of being conscious, as though for the first time.

Wine Controversies: Wine writing about what consumers want is bunk