Ice Wine – A vinous beverage improved immeasurably by the addition of an ice cube or two.

Icon Wine – A little-bread-and-a-lot-of-circuses-wine. Oenological tropes are used to layer on theoretically-desirable flavours and textures (by means of 100% new oak, micro-oxygenation, spinning cones and various techniques of tannin management) in order to give a more seemly cut to the emperor’s exceedingly bulky new raiment. As mentioned, new oak is often lavishly employed– its presence serves to make the wines more expansive (possibly), by definition, certainly more expensive, conferring pseudo-gravitas in spaded to the whole production.

Made by, and made for, extracto-philiacs who don’t mind when the maquillage masks the beauty of the terroir and prefer to put their money where the mouthfeel is.

Also as in “icon-not afford to drink these wines” and “icon-not ever envisage wanting to do so”.

Icon 2 – A wine that acquires its elevated status not through pure aesthetic appreciation but via a coefficient taking account of cost, potential, aura… The wine is thus set apart, trading on bubble reputation and price. Even the word icon is objectionable – it sets the wine up as a religious curio, its value index-linked to its value, so to speak. On the few happy occasions when I have been privileged to be in the same room genuflecting to the icon wine, I strike my awe, duly suspend my critical judgement, and lubricate my tongue with tiny artificial taste buds in the shape of dollar signs. It doesn’t matter in the least whether the wine looks and tastes like treacle or whether the semblance of fruit peeking out humbly through the interstices between the bars of the noble oak prison that houses it will never see the light of glass..

A spoofy £300 icon wine may exhaust my palate and patience after a single glass. Where’s the value in that – other than I may dine off my chronic iconic disappointment for years to come? The value of the wine is not the label, nor the Parker points, nor the money that has been spent on marketing the estate, but rather the love, care and attention that has been poured into the wine from tending the vines to nurturing the wine through its fermentation.

Idioglossia – An idiosyncratic language (see Jargon), an amalgam of arcane tasting notes, points scores and marketing babble, invented and spoken by a tiny number of people in the wine trade. 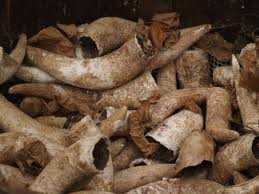 Incrocio Manzoni – A shady cardinal used by Borgias to poison the wine of their enemies.

Indefatigable – Used to describe a blogger who is eternally vigilant about juxtapositions in the blogosphere of individual words such as “natural” and “wine” and is alerted by Google reminders to such juxtapositions by The Resounding Chimes of a Mighty Carillon.

Indispensable – Truly the sum of all human wisdom seems to be the aggregate of tools at one’s disposal. Reliance on gewgaws and gimcrack technology to make wines.

Indigestible – Too sweet, too seasoned, too rich, too unctuous. Molasses on your molars, treacle in your tonsils, oak in every orifice. One glass of this wine is way more than enough.

Indigestible 2 – I was privileged to be given the chance to try several very expensive wines the other night at a rather smart restaurant. I won’t name names but to give a rough geographic indication there was a Bordeaux with smart bib and tucker, a plutocratic Ribera del Duero, mortgageable Italian property, in short, enough pickled pointage (Pinotage??) for the Parkeriest Pecksniffer.

Whether termite’s delight or woodpecker’s whoopee we were talking serious plank-ton here, brought to you courtesy of an oenologist char-wallah. Reference previous articles about wines which seem to come fresh from the vineyard to your glass these were all filtered through the gummy gauze of clumping übertechnique. My mental notes were: long hang time, low acid, burnt toast, scaggy jam, bitter tannins and s*l*h*r. Because ultimately you don’t digest iconic wine, it digests you and your wallet.

Inebriated – Is it easier to become drunk on a gallon of cheap Pinot Grigio or the heady fumes of certain wine critics’ verbosity? Answer is yes. And no.

Inert Gas Syndrome – What one feels after drinking a particularly sulphurous example of Soave Gassico.

Infallibility – We’ve heard of papal infallibility but how about palatal infallibility? If you have a quality hooter and a decent tongue and are a prolific pontificator about wine, then you must insure your tasting organs for an arm and a leg. For although opinions are iron-clad, smell and taste can come and go.

Inferno – A description of the state of one’s head after Inert Gas Syndrome. Also a subzone of Valtellina in northern Italy.

Infanticide – see necrophilia – to settle the precedent between froggy and fogey. The French generally prefer drinking their wines young with that primary bloom of fruit, the Brits tend to respect maturity and genteel decay, although to age a wine to its optimum drinking point requires luck as well as judgement. No two bottles ever taste the same – even of the same wine. Wine is living, developing thing; the best solution is to buy a case of quality wine, store it in a cool, stable environment and to open a bottle at regular intervals of say, six months (depending on the wine, of course), in order to witness its evolution. Drinking a wine young is not a crime, however, and it should be remarked that winemakers are making their wares for consumption in the short and medium term rather than requiring a lengthy hibernation in The Seven Sleeper’s Den. All this refers to quality wine, by the way. In terms of the cheap and nasty, substitute insecticide for infanticide.

Infantilism – one of obvious symptoms of terminal critical hype.

Gratuitous Government Interference
Usually a reminder tagged on to the back of the bottle from an American Surgeon General not to operate heavy machinery such as corkscrews while imbibing. 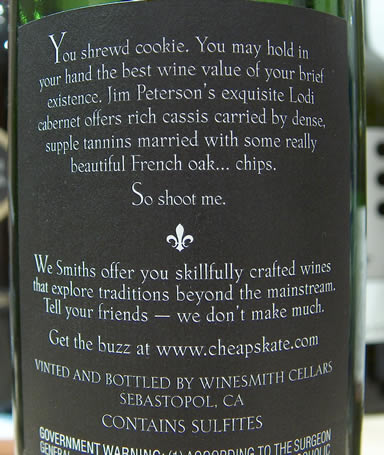 Huffing and Puffing
The back label, seen on cheaper wines, contains background information on serving suggestions, temperature, a tasting note and often a food recommendation. Note and ignore the use of superlatives e.g. “made from the ripest grapes grown in the optimum conditions in Chumba Wumba”. This roughly translates as “this wine comes from the ferociously hot arid region of Chumba Wumba where the sugar levels in the grapes get so high that we are forced to acidify just to make it palatable”. You may also get the wine-maker’s notes extolling the wonders of the vintage (usually of the decade) the beauty of the location of the vines and so forth. As for imaginative pairing with food all white wines apparently, by the way, go with chicken, fish, seafood and salads or make a very pleasant aperitif. On cheap wines such furbelows are fair enough, on expensive wines they are facile. The tasting note is a quick advert – they are not going to say the wine is bad, are they?

Information is relative as well. The abvs % are rounded up or down. Woe betide a winemaker who puts the actual measurement on the label. The only additive which is mentioned is sulphur dioxide, even if it is, relatively speaking, a drop in the ocean, and yet dozens of chemical interventions (many that materially alter the nature and constitution of the wine) may be omitted. So the true definition of information is either misinformation or disinformation.

Integrated – a wine in which all the various components are happily singing in harmony.

Integrated Pest Management – Natural solutions used to ward off unwarranted visitors to a vineyard, such an angry bull or a mangy-looking, possibly rabid, dog.

Internationalism – We live in age of superlatives, wherein wine makers strive to achieve the highest international recognition of their art by refining their technique. Oenologists are breeding faultily faultless wines that have little or no relevance to the region from which they come. These wines are as polished and saturated with flavour as you are likely to find, but curiously hollow at the same time. One is reminded by Pauline Kael’s observation about Cecil B de Mille’s pictures: “small minded on a big scale, they’re about as Promethean as a cash register”. Internationalism, ultimately, is globalism writ small, wherein diversity and individuality are swallowed in the desire to make wines that appeal to the widest denominator of people across many countries and to the taste of the critics that supposedly influence the buying habits of their respective readerships.

Interprofessional – a generic body promoting the interests and image of a certain region at the expense of avowedly individual/non-conformist growers and producers. In the same vein, a bureaucracy that creates Byzantine rules and regulations to strangle individual creativity using commercial imperative as an excuse.

Inspissated Gloom – The expression on the faces of professional tasters at one of the major wine challenges when they first realise that the next three flights of wine will be like having waves of tannic broth beating against your gums, teeth and tongue. 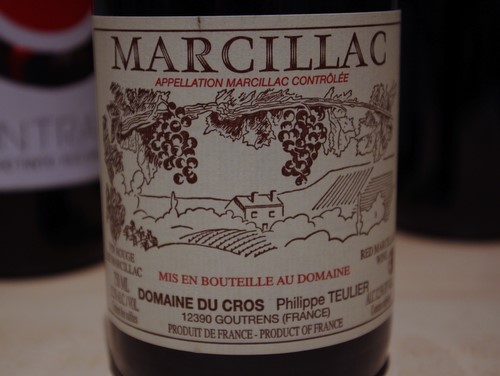 Irony – A description of the wines from Marcillac and the Aveyron.

Irouléguy – There are truths on this side of the Pyrenees, which are falsehoods on the other – Blaise Pascal. The truth on this side is Tannat-driven reds, agreeable seafood-friendly rosés and a handful of terrific Manseng-&-Courbu-blend white wines. It may be tiny, but Irouléguy rules.

Irreproachable – Once achieving the exalted status of master of wine, everyone and everything that you once inveighed again in the wine world becomes irreproachable.

Irrigant – the annoying habit of watering vineyards in certain regions which, in turn, has a detrimental effect on the salinity of the water table.

The Unalternative Wine Glossary: B