View previous glossary entries, from the A’s through to V’s HERE! 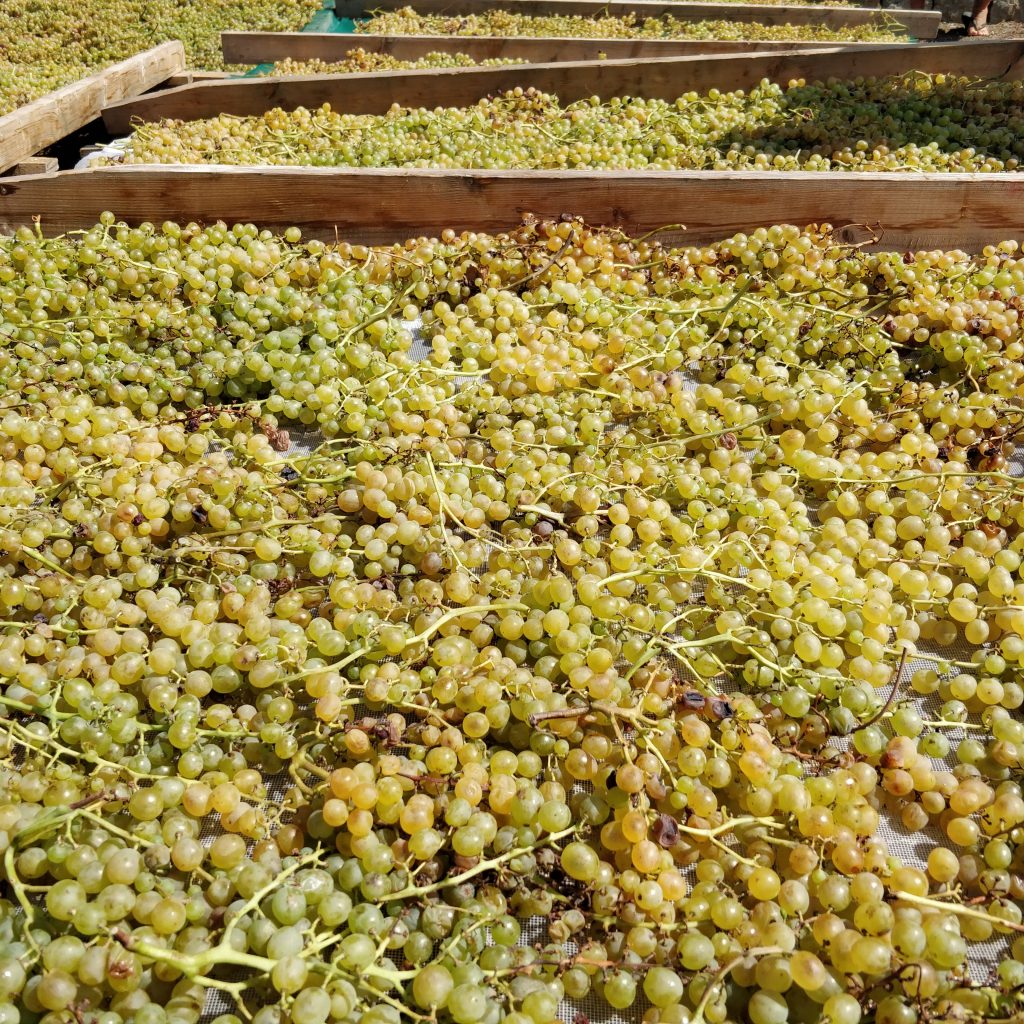 Also known as whole-cluster pressing and/or whole-cluster fermentation. Leaving the stems with the juice can add more tannins and structure to the finished wine, and may also impart additional flavours and textures. If the clusters are picked early in the maturation process, the greener, more flexible stems might impart vegetal or herbal notes. Which may or may not be desirable. If the clusters are allowed to hang on the vine longer, given time to achieve full polyphenolic ripeness and lignification of the stems (turning rigid, brown and woody), the flavours imparted will be more mellow, earthy and spicy. Whole bunches of grapes are often used in carbonic maceration. Whole bunch can also be total (100%) or partial according to the judgement of the winemaker as to the balance that he/she is seeking. There is a trend to destem grapes and to keep the stems and add as necessary to the ferment.

Wine. An alcoholic beverage made from the fermentation of unmodified grape juice. The product in the bottle which is labelled as such. Both the overall subject of wine in itself and a specific bottle or glass of wine. The symbolic representation of wine: in religious or spiritual writing, the notion of religious ecstasy or spiritual love.

Wine Label. A sticker affixed to the front or the back of the bottle detailing relevant legal information and perhaps some descriptive information, which may or may not be useful. Also may be used a form of branding.

Winemaking/Winemaker. The process of transformation whereby the grape juice becomes a wine. The winemaker is the individual who oversees the process and makes the myriad decisions which shape the final outcome of the wine. These decisions take the form of both physical and chemical interventions and additions. The desire to make wine without chemical additions has resulted in a natural wine movement who believe that wine is made fundamentally in the vineyard and by means of proactive farming and the role of the winemaker is to accompany the grapes to the bottle with as few interventions as possible. The winemakers who practice in such a fashion see themselves as vignerons rather than people who make wine.

Wine Press. A device for extracting juice from crushed grapes and the journalists who write about this process. The presses in question can range from old-style manual basket presses to modern pneumatic presses. Whichever they happen to be, the vigneron will be inordinately proud of them.

Wine Tasting/Wine Tastings. The sensory and perceptual evaluation of wine, encompassing more than taste, but also mouthfeel, aroma, and colour. Tasting methods are taught in such as way in wine courses so as to give individual tasters a structured approach when evaluating a wine, the tasting tools to measure it against qualitative values. The idea is to find a common ground and come to an objective assessment about quality. However, individuals taste differently and have different perceptions about what they like and what they consider palatable.

Wine tastings are events organised for anything from small groups to huge crowds and may take many forms: tastings for magazines, panel tastings for regional or even global wine awards, tutored tastings and, of course, the generic regional and national tastings and wine fairs and expositions. The awards tastings invite producers to submit their wines for a fee and to be assessed by a panel of “experts” and scored accordingly, the best wines being awards medals and trophies. Wine fairs may be open to professionals or consumers depending on their purpose. Natural wine fairs/events focus exclusively on the individual producers and have served to make tastings more diverse, interesting and above all, more intimate, exposing the general public to a global style of wines (as opposed to a country or country and also bringing the growers before their public.

Woodiness. The woody flavours that one may taste in wine are often on account of the oak barrels that the wine was raised in. When pronounced, this woodiness manifests in strong aromas of vanilla, coffee, toast or smoke and the wines can often feel dry in the mouth. In these cases, the use of oak is overwhelming the other elements in the wine, its fruit and freshness, and it is doubtful that the imbalance will ever be happily resolved. The vogue for making wines with lots of new oak was an oenological feature between the 1980s and early 2000s, where superficial richness was the order of the day, but many oenologists now recognise that woodiness for its own sake is an undesirable organoleptic feature of a wine.

Xylem. The woody tissue of a vine, that includes heartwood and sapwood, which transports water and nutrients from the roots towards the leaves.

Yeast. A microorganism used in winemaking (as well as baking and brewing). Yeasts consume the sugars in grape juice and excrete ethyl alcohol and carbon dioxide as waste products in the process of fermentation. They continue until all the sugar is gone, or until the alcohol level reaches about 16%, at which point they die. Yeasts are ambient; certain populations live in the vineyards and surroundings, and come into the winery on the surface of the grapes; others live in the winery itself. The decision whether to allow the fermentation to proceed with the wild strains of yeast or to inoculate with a specific cultured yeast strain is one of the most important choices in winemaking. If the fermentation proceeds with the native yeasts, this is called wild fermentation (or natural or ambient). Inoculation can be done with neutral yeast strains. This is done to eliminate “bad” yeasts and to control the fermentation. Other yeasts can be used to add a specific flavour profile to the wine. Natural winemaking favours wild fermentations, although there is an argument about isolating yeast strains which are indigenous to the vineyard in question and using them purely for fermentation purposes.

Yield. A measure of the quantity of grapes or wine produced per unit surface of vineyard often expressed in hectolitres per hectares or tonnes per acre in the US. Knowing the yields gives us an indication of the productivity of the vines or the vineyard in general, but also the intention of the producer in terms of scale of production. Low yields, for example, may derive from a vineyard wherein the vines are widely spaced, or from very old vines wherein the yields are naturally low (but the quality of fruit is correspondingly great) and also because a lot of selection is done in the vines (pruning, canopy work, green harvesting, triage, and other forms of fruit sorting) leaving only the best fruit. Conversely, higher yields may be the result of over-yielding or highly productive grape varieties.

Young/youthful. Tasting term describing where the wine is in terms of its taste and drinking evolution. A young wine is often newly-released (nouveau in French, joven in Spanish) and in these cases the wine is intended to be drunk as soon as it is released into the market. This wine will usually be juicy, fruity and rounded. Young and youthful are used in tasting notes to indicate the wine is at an early stage of its development, one in which all the components are still coming together and it is yet to “peak.”

Zymology/Zymurgy. The science of fermentation in wine. French chemist, Louis Pasteur was the first zymologist when in 1857 he identified the fact that yeast was linked to fermentation. Pasteur originally defined fermentation as respiration without air, concluded: “I am of the opinion that alcoholic fermentation never occurs without simultaneous organization, development and multiplication of cells.” Later, Eduard Bucher, winner of the 1907 Nobel Prize in chemistry, determined that fermentation was actually caused by a yeast secretion, which he termed zymase.

Of Good Fairs, The Real Story, and Georgian Wine Culture

Of Qvevri and Chinuri: Part 2 (“Feats of Clay”)