Quality Price Ratio. A wine that offers good value, outperforming its relatively humble selling price. Can also apply to more expensive wines if they are viewed as offering relative value for money. Since prices are often rigged by supermarkets and consumers are viewed as responding to critical price points, then the procedure of deep discounting is a commercial tactic used to give the impression that certain wines are being sold at a price that offers extraordinary value. Actually, the real value is the amount of aesthetic pleasure given by the wine and not by the price band. 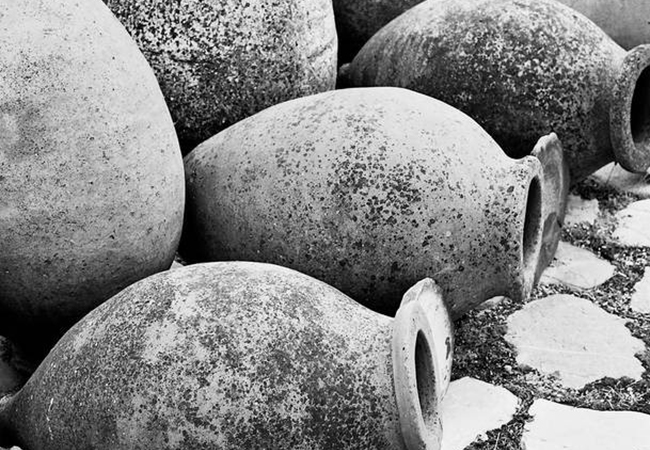 Qvevri. A kind of terracotta clay vessel made in Georgia and used in Georgian winemaking. Qvevris are large vessels fired in kilns, lined with beeswax and once finished, buried in the ground either in the marani (cellar) or even outside. Traditionally, they are sealed with a stone and earth is heaped on top. Bulbous in shape, they taper at the bottom to a sharp point. Qvevris are not moved unless they need to be repaired. Qvevri winemaking is very particular. The wines ferment with their skins and when the cap/marc (called chacha) drops to the bottom of the vessel, the wine is racked into another qvevri where it remains until bottling. With the vessel being buried and with micro-oxygenation through its pores, the whole process of winemaking and maturation is slow and ambient.

Racking. Racking is the process of moving wine from one vessel to another using gravity, with the purpose of removing it off the sediment and lees. This step helps to clarify the wine, prevent off-flavours developing from the lees and sediment, and create a desired flavour profile. Each racking exposes the wine to oxygen which may be beneficial in small amounts, as it helps develop aromas and flavours. Constant racking can expose the wine to too much oxygen. Vignerons don’t have a consistent view on racking; many prefer to leave the wine with its lees for as long a period as possible; others view racking off the gross lees as a necessary refinement and helping to prevent reductive aromas in the wine.

Racy. Describes a wine that has bold and refreshing acidity. When you put such a wine in your mouth you feel that it is linear in construction (as opposed to a broad wine that fans out and seem to coat to the tongue). Racy wines are not simply acid for acid’s sake; there is an implied energy in that acidity, a vivacity that shines through.

Raw. Used in the context of minimal/zero-chemical-intervention wines. A wine that feels devoid of process. A wine that does not conform to the rules of conventional winemaking which sets a value on cleanness and correctness. Also, a wine that is young or tough, embryonic and unformed. Acidity and tannins can be raw, in that they are not integrated into the wine itself. Also, RAW, the name of an organisation which puts together natural wine fairs across the world and accredits growers for working in a natural idiom. 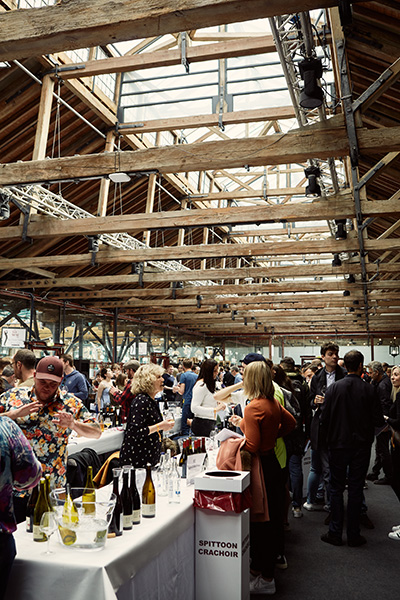 Real. Real Wine. Also closely related to natural wine. Begins with the premise that wine is more than a product manipulated to be as consistent as possible, but that it is a living, mutable thing, the result of excellent farming and light-touch winemaking. When you taste a real wine, you sense its vitality, a particular energy, it takes you back to its origins and the person/people who helped to shape it. Also associated with a growers’ natural wine fair in London, which we are too modest to talk further about.

Reduction. Reductive. Reduction is essentially the opposite of oxidation. Many wines are made in a reductive (i.e. minimal oxygen) environment. Whereas oxygen is used at the beginning at the winemaking process to help the yeasts multiply, it is seen by many winemakers as undesirable at other times, and so they protect the must by various means such as sulphur dioxide; inert gases; sealed stainless steel tanks and regular topping up of barrels. A reductive nose can be intriguing, such as the struck-match character. Reductive aromas have even been linked by several researchers with minerality. In contrast, the nose of a wine that is reduced (not reductive) is unpleasant – smelling of anything from burning rubber to off-cabbage. This is because both reductive and reduced smells come largely from a group of volatile sulphur-containing compounds known as mercaptans. Many vignerons (natural and others) prefer to work oxidatively or micro-oxidatively and believe that an overly reductive environment inhibits the wine from breathing.

Reserve. An old-fashioned word used predominantly in France to denote a cuvée selection, but as often as not just the basic wine from a domaine.  Riserva and Reserva wines in Italy and Spain indicate a minimum period of ageing (either in barrel and/or bottle).

Residual Sugar. Residual sugar is the sugar that remains in a wine after fermentation completes. The reasons for this might be firstly, that the yeasts were unable to continue converting sugar to alcohol; secondly, that the wine was fortified with grape brandy which stopped fermentation; or, thirdly, that the temperature dropped (or was artificially dropped) significantly, killing the yeasts (or rendering them dormant). Residual sugar is measured in grams per litre. Residual sugar, though it has an impact on the characteristics of the wine, is usually not the basis of determining the sweetness of that wine. Most red wines will under less than 1g/l of rs, whereas dry wines can go from under 1 to around 40 r/s. The impression of sweetness though is more affected by the balance of sugar with other factors such as acidity, alcohol, acid and tannin. In pet nat winemaking, the wine is put into bottles before the residual sugar ferments out, and continues the process in the bottles.

Resveratrol. Red wine, in moderation, has long been thought of as a healthy, even a medicinal drink. It is averred that the antioxidants in red wine may help prevent coronary artery disease, the condition that leads to heart attacks. Part of the benefit might be that antioxidants in red wine may increase levels of high-density lipoprotein (HDL) cholesterol (the “good” cholesterol) and protect against cholesterol build-up. A polyphenol called resveratrol is one substance in red wine that seems to prevent damage to blood vessels, reduce low-density lipoprotein (LDL) cholesterol and prevent blood clots. Resveratrol derives from grapeskins and because reds are fermented with grapeskins they naturally contain more resveratrol. However, research on this subject is not entirely conclusive.

[Professor Roger Corder has written a book on this subject called The Red Wine Diet.]

Ripe. Ripeness. The point of maturity when it is best to harvest grapes. Under-ripeness can lead to green, herbaceous aromas and flavours in the wines, over-ripeness to excess of alcohol and jamminess. Ripeness is associated with balance, as in “perfectly ripe.” In tasting notes, ripeness without other qualities is not necessarily a positive and is usually qualified with approbatory adjectives such as “good” or “excellent.”

Rough. Describing the texture of the wine and associated with coarseness. The sense that the wine is unfinished and unrefined. May also indicate a wine that is unmediated, where the vigneron is content for it to be raw and unreconstructed.

Rustic. A rustic wine will be earthy, often sanguine, and remind one of the countryside, of forests and bushes.  Rustic wines tend to be reds, but certain whites and skin contact wines may merit the epithet, especially those with secondary aromas. For some, rustic connotes simplicity and crudeness, whereas for others it is a sign that the wine remains close to its origins, and has the capacity to transport the drinker to its point of origin.

Doug Decants: Valtellina, a Trio of West Aussies, and Sherry