Gamey. Gamey is a subjective descriptor, used in a positive sense by some and in pejorative way by others. It is a characteristic often used to describe a wine in both its aroma and taste. A gamey wine is one which has the characteristics related to wild animals such as venison, wild boar, hare, and rabbit. The wines in question are usually rich red wines, the qualities of gaminess are described in terms of roasting meat, gravy/pan juices and sanguinary qualities. Occasionally, gamey encompasses hot leather and barnyard aromas.

Georgia. A small country in the Caucasus that has been in many people’s minds for a few years since it opened up to wine tourism and merits its own entry on the basis of its profound impact on the world wine scene. 8,000 years of winemaking, the qvevri terracotta pots, skin contact/amber wines and the very symbolism of wine that permeates everyday life in Georgia has made this country an important destination for all wine loves. Georgia is also emblematic of diversity with some 525 + extant grape varieties. 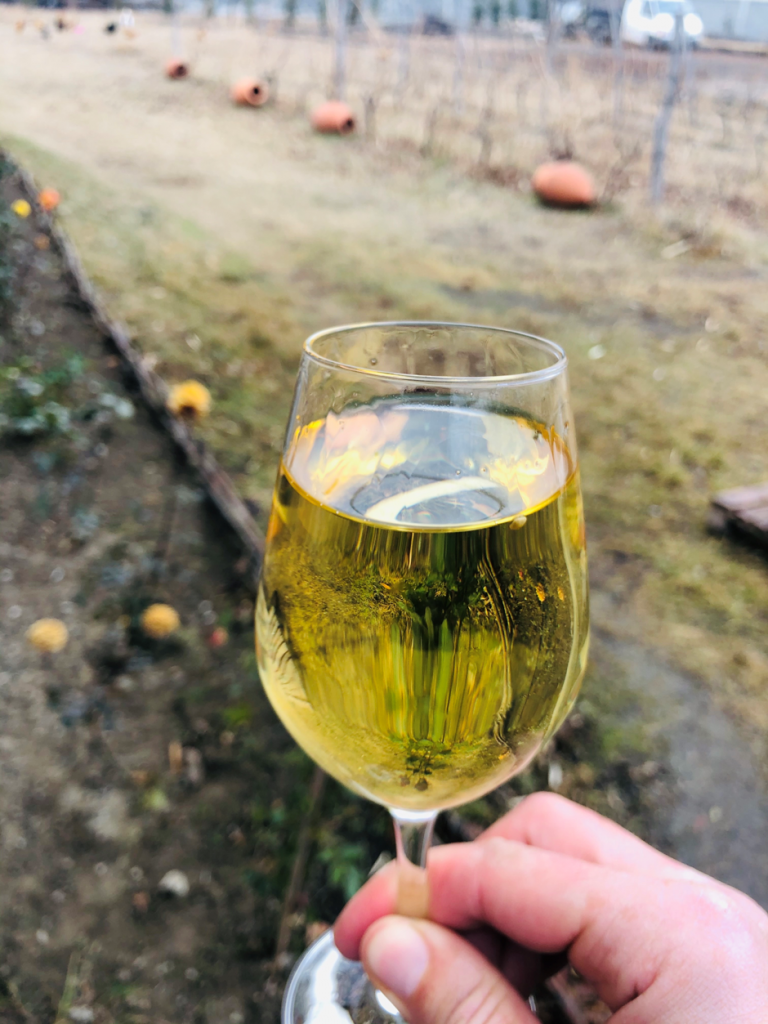 Globalisation. Globalisation – in terms of wine – has resulted in standardisation and then the kickback against standardisation. The influence of supermarkets, their buyers and the oenologists who make wine, has established standards, for better or worse, about what is commercially viable (and therefore acceptable). The product wags the winemaking, from farming, the price of grapes and winemaking practices. Stability is cherished, as is consistency. Homogenisation is easy to market, but for those who prize authenticity, originality and individuality it is anathema. Natural wine is more of a big village than a global phenomenon, based on shared values but different tastes.

Glossary. Small primers, dictionaries, wine encyclopaedias – usually a key to important and commonly-used wine terms. Definitions may be simple, but the truth rarely is, and wine glossaries barely scratch beneath the glossy surface of the subject. 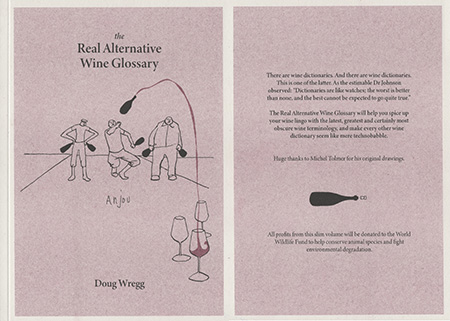 Glouglou. A French epithet describing a style of a wine (often a red), that is particularly quaffable or gluggable. The sound the wine makes as it goes down the throat without touching the sides. Often youthful or nouveau-style wines, released after minimal ageing, without oak influence, perhaps made by means of carbonic or semi-carbonic maceration, bottled without sulphur, or anything added. A fruit-driven style of wine very much found and consumed in natural wine bars.

Gout/Goût. An inflammation of the joints due to excess uric acid. Rheumatology experts such as Alfred Baring Garrod drew comparisons between epicurean lifestyles, and particularly the consumption of port, with the onset of this condition. The other meaning of the word as in Goût de Terroir is a French term used to describe a wine’s unique aroma and flavour, by attributing these to where the grapes have been grown, literally “the taste of terroir.” The term is rooted in the fact that vines perform differently in different locations and consequently the wines taste different. It is said that the medieval monks used to “taste” the soil, as preparation of where to plant the vines.

Grand Cru. A cru is “a vineyard or group of vineyards, especially one of recognized quality.” It is a French wine term which is traditionally translated as “growth”, as it was originally the past participle of the verb “croître” (to grow). As a wine term it is closely connected to terroir in the sense of an “extent of terrain having a certain physical homogeneity. . . considered from the point of view of the nature of the soil as communicating a particular character to its produce, notably to wine.” More specifically, cru is often used to indicate a specifically named and legally defined vineyard or ensemble of vineyards and the vines “which grow on [such] a reputed terroir; by extension of good quality.” The term is also used to refer to the wine produced from such vines. The terms Premier Cru, Grand Cru, etc., are generally translated into English as First Growth, Great Growth, etc.; they designate levels of presumed quality that are variously defined in different wine regions. Having said that, the fact that vines may be located on exceptional terroir, is not a guarantee of quality in itself, as winemaking can obfuscate as well as channel, and Grand Cru has wrongly become associated with the status of a wine, its financial pulling power, rather than the faithful reflection of the exalted vineyard in question.

Gravity/Gravity Fed. Gravity flow winemaking is becoming increasingly popular and wineries are set up to achieve this process. The process in gravity flow (also known as gravity fed) winemaking, allows for the wine to stream from winery levels. Unlike traditional one-level cellars there is no use of pumps or mechanical force, enabling the wine to gently extract colour, flavour and tannin. Winemakers like that gravity flow provides a gentler, less interventionist approach to winemaking, takes less work moving around pumps and hoses and requires less electricity.

Green. In tasting note terms, the description of unripeness tasted in a wine. Associated also with “stemmy” or “stalky” flavours, pyrazine and herbaceous tones. Maybe the result of early harvesting, lack of ripeness in the fruit or use of stems in the fermentation. Also refers to acidity (green acidity) and to tannins (green tannins). 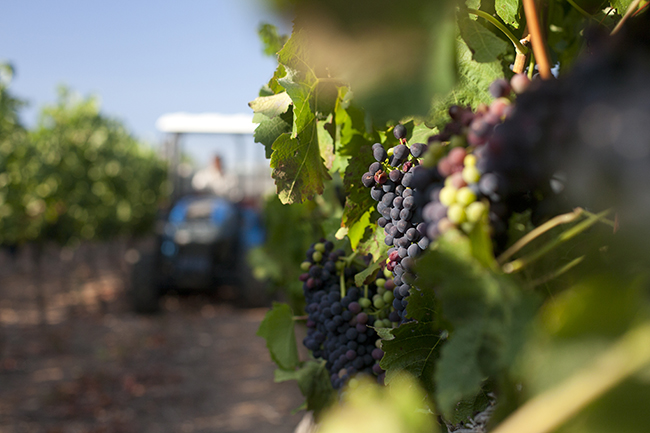 Green Harvest. Green harvesting is the process of removing grape bunches from a vine with the objective of balancing leaf area and fruit weight for a crop so that it can attain better and more uniform ripeness. The leaves carry out the photosynthesis that produces the sugars which allows the grapes to ripen. If there are too many grapes and not enough leaves, the vine will struggle to ripen the berries. The process is manual and occurs when the grapes are undergoing veraison, and the grower. As with all vineyard activity it is a judgement call; in certain vintages one may prefer to leave more bunches of grapes on the vines to mitigate overconcentration.

The World According To Grape