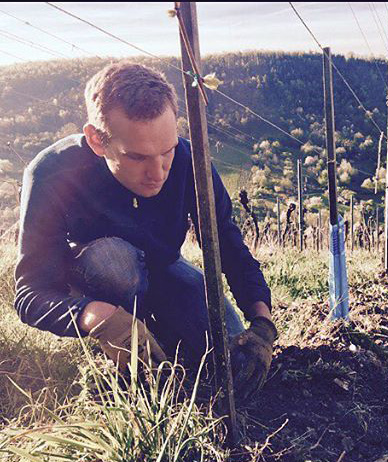 The Dietrich family has farmed land in Alsace since 1600 (mostly in this village of Scherwiller but also in an adjacent village). In the past, the family farm used to be run on the basis of polyculture, however the family now concentrate on growing vines and other fruit. In 1999 Yves converted the estate to organic farming (at the time he would sell his grapes to the local Cave cooperative). Pierre and Jean took over the responsibility of the winery in 2016, and were the first members of the family to bottle the estate’s wines. The estate has been farmed with biodynamics ever since 2003. It comprises 18.5 hectares of vines and also 6 hectares of fruit trees from which the family also produces Pet Nats from black and red cherries, Damson and Victoria plums.

“Achillée” is the name of the plant Achillea Millefolium (common yarrow in English), that is used as an infusion in biodynamic farming, it grows very naturally in vineyards, and it is sometimes planted intentionally in by vignerons for its ability to enhance the antifungal powers of plants growing near to it, therefore reducing the necessity of regular sulphur spraying on vines. It is also planted for its capacity to contribute coolness and energy to the vine plants in the summer heat. Pierre comments that, ever since his family converted its vineyard to biodynamic farming, this flowering plant has grown up quite naturally amongst all their vines and, even though the Dietrich family’s estate contains five different soil profiles and several different micro-climates.

The Alsace Blanc is the ultimate in kitchen-sink blends, composed of Sylvaner (50%), Gewurztraminer, Riesling, Pinot Blanc, Pinot Gris and Pinot Noir, with Auxerrois, Muscat and Chasselas. The Sylvaner vines used in this cuvée are planted facing west, on flat riverside plains, containing cold, fertile clays (this area used to be the old wharves and embarkation quays for the River Aubach that runs through the village of Scherwiller). The other grape varieties are planted in diverse expositions, in the various other soils types and areas that make up the family’s estate- such as in sandstone or granite soils, two hundred metres high up on the slopes of the local mountain, or on the stony, poor soil that surrounds the village of Scherwiller. The nose is pure with floral notes, accompanied by aromas of apricots and mirabelle. The palate is very elegant with good structure and great persistence. A variety of citrus fruit notes enrich the aromatic palette.

The straight village Riesling comes from 30 year old vines. These are in several different locations with several different soil profiles, altitudes and expositions, ranging from the poor, stony ground of the village of Scherwiller, decomposed granite of the slopes in the top quality local Grand Cru zone (‘Frankstein’ Grand Cru’) and the schistous soil of the nearby villages of Schiefferberg and Bernardvillé. Harvest is manual. The different parcels are vinified. Only the best batches are used in the final blend. Fermentation for eight months in stainless steel vat with indigenous yeast and matured in stainless steel vats on lees for over a year. After a full malolactic conversion, the wine is bottled without fining. Subtle hints of lemon and lime, enhanced by notes of white flowers. The palate is firmly structured with a well-integrated acidity endowing the wine with good length. Finally, a multi-layered finish with discreet touches of citrus fruits including grapefruit.

The Riesling Hahneberg comes from the sandstone slopes of the Haut Koenigsbourg, the easternmost hill with the range. This mountain of the rooster receives lots of sun. After settling the wine undergoes fermentation for a year with native yeasts, then a further 22 months in tanks on the lees, before filtration and a little bit of sulphur at bottling. Notes of liquorice, blood orange, ripe lemon with a salty finish. 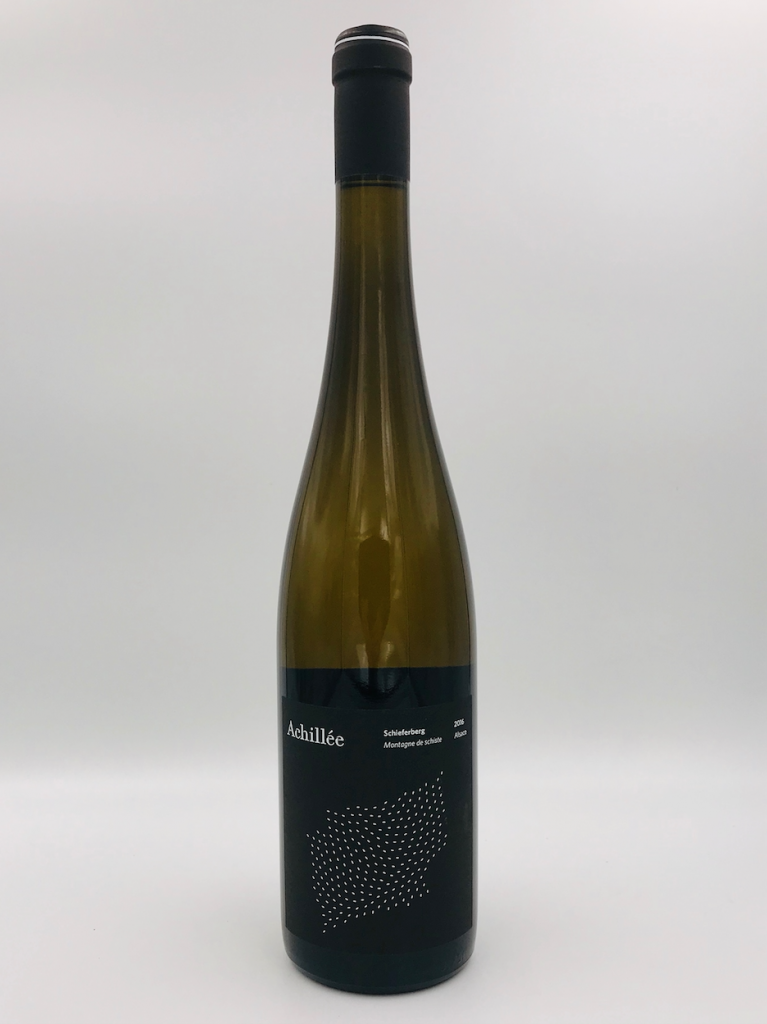 Schieferberg is a terroir in the village of Reichsfeld. Here we are on schist, a fairly rare soil type for Alsace. These schists confer an intense minerality to the wine, great structure and fine lingering acidity that keeps the wine in focus and gives it enormous ageing potential.

The grapes come from two large parcels of Pinot Noir, within the village of Scherwiller, planted facing East, on the plain of the River Villé, where the soil is a poor, gravelly soil, originating from the alluvial deposits of the river. There is also a little clay, as well, making this soil cold. From a mixture of young vines (between 10 and 15-years-old) and old vines (50-years-old). Pinot Noir is a grape variety that is prone to disease so particular care is given to the work in these parcels (especially the tying-up of the shoots onto the lead wires). Leaf-thinning is done on the side of the vines that face north, debudding takes place, too. The family uses only one type of vine cut and vine training in its estate- bending the vines in two arch-like curves. Pierre explains that the resulting shape looks like a large letter ‘M’, and jokes that they thereby do free advertising for McDonalds in their vineyards.

The grapes were harvested by hand, with 1/3 crushed by foot, and 2/3 were left whole. Everything was put into a 40-hl stainless steel vat for 8 days of light semi-carbonic maceration, with a wild yeast fermentation. Pumping over of the cap was carried out manually by pouring the juice back over the cap from a bucket, twice a day. Punch-downs of the cap were carried out once a day, by foot. After maceration and fermentation, the must was pressed, and the press juice and the free-run juice were blended together, the wine was aged for twelve moons (!), on lees, in the same tank. The wine was bottled without filtration or fining and only the tiniest amount of sulphur.

The absence of filtration adds depth to the violet colour. This wine will benefit from being opened and left to breathe in advance of tasting it: the slightly animal notes will cede to black fruits, (e.g. morello cherries) and notes of almond and pistachio, developing into bitter chocolate and spices). Fine tannins and good acidity balance out and lighten the rich volume and weight.