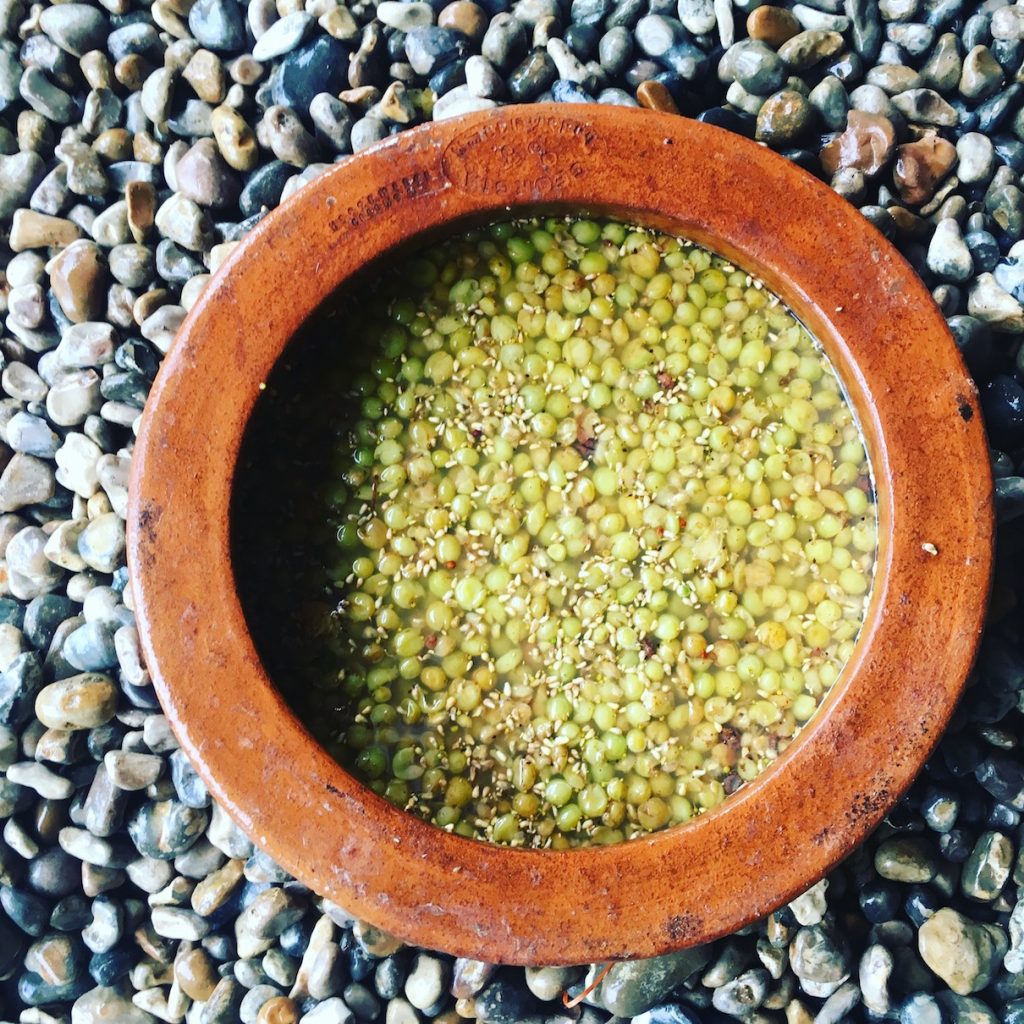 Having just received a tranche of Georgian wines it seems timely to remind ourselves what makes these wines unique.

Often when we talk about wine we focus – quite rightly – on the vineyard and the terroir. Winemaking is sometimes construed as the scientific means of getting the liquid into the bottle in good shape. When you think about Georgian wines, you automatically think about the function (and symbolism) of the qvevri. It is more than just a clay vessel buried in the ground to ferment and store the wine; it helps to shape the structure and the flavour of the wine itself and the journey of the wine from grape-picking to fermentation to racking to being ready, is seen in terms of bringing a baby into the world and giving it the nourishment to take its first steps.

It is more than just a clay vessel buried in the ground to ferment and store the wine; it helps to shape the structure and the flavour of the wine itself and the journey of the wine.

Here is an interview with John Wurdeman of Pheasant’s Tears about the role of the qvevri in Georgian winemaking, conducted back in 2013.

Kvevri? Qvevri? Which is it?

We are spelling it “Qvevri”. There was much discussion on this; a few German importers prefer the Kv rather than Qv but I have had the Travel channel CNN, BBC and Jancis Robinson’s upcoming books on varietals and wine atlas all use the Qv spelling which the Georgian wine producers are using, so Qvevri.

The word “Qvevri”–does it literally mean amphora or does it derive from something else?

No, it doesn’t mean amphora. Amphorae were often used for transportation, or storage above ground – they often had handles and were not permanent. Qvevri is a Georgian vessel dating back over 8,000 years predating Greco-Roman traditions of winemaking. A qvevri was totally buried in the ground and not used for transportation, it was used for fermentation and storage of wine, and, being totally immersed in the earth gave it naturally stable temperatures, advantageous for both fermentation and storage. It is a vessel unique to Georgia (oldest examples date back 8,000 years) although similar interpretations are found throughout the ancient Near East and more recently, (2,000-3,000 years ago) in Italy, Spain and Portugal. The vessels used in western Europe culture are normally above ground or partially buried. Qvevri usually have a beeswax lining inside and a lime encasement outside. The few European producers that have borrowed this technology from Georgia—such as Josko Gravner—still call the vessel “Amphora” (or Anfor) on their labels, which bothers the Georgians. They feel it sounds like a Roman or Greek cultural attribute whereas this is much older and indeed derives from Georgia. The Friuli/Slovenian producers, including Gravner, bought qvevris in Georgia and learned their open-fermentation, extended skin maceration techniques here, so we hope over time to convince them to call the vessels qvevri rather than amphora!

Where are the qvevris made? And by whom? Is this a widely spread artisan skill in Georgia?

There are about five good qvevri producers, but they are all living in poverty and the craft is in danger of dying out. We are currently trying to solicit funding to help build a school for a new generation of qvevri craftsman to be taught the skills. They are mostly in Vardisubani village in Kakheti and Shrosha in Imeriti region. UNESCO is considering adding the qvevri method to their world heritage list*. If this happens it will be easier to rally support for the protection of the vessel and its name.

*Since 2013 Qvevri making is inscribed on UNESCO’s representative “List of the Intangible Cultural Heritage of Humanity”:

Qvevri wine-making is practised throughout Georgia, particularly in village communities where unique varieties of grapes are grown. The Qvevri is an egg-shaped earthenware vessel used for making, ageing and storing the wine. Knowledge and experience of Qvevri manufacture and wine-making are passed down by families, neighbours, friends and relatives, all of whom join in communal harvesting and wine-making activities. Children learn how to tend the vines, press grapes, ferment wine, collect clay and make and fire Qvevris through observing their elders. The wine-making process involves pressing the grapes and then pouring the juice, grape skins, stalks and pips into the Qvevri, which is sealed and buried in the ground so that the wine can ferment for five to six months before being drunk. Most farmers and city dwellers use this method of making wine. Wine plays a vital role in everyday life and in the celebration of secular and religious events and rituals. Wine cellars are still considered the holiest place in the family home. The tradition of Qvevri wine-making defines the lifestyle of local communities and forms an inseparable part of their cultural identity and inheritance, with wine and vines frequently evoked in Georgian oral traditions and song.

What are they made of exactly? Is there a special glaze?

It is pure terra cotta, baked red clay, built-coil method, but the quality of the clay and water used is as important as firing techniques. The vessels are usually between 100 and 4,000 litres in volume although some have been discovered that are between 8-10,000 litres. Small qvevris are good for fermentation, bigger better for storage. No glaze is used.

What is the customary winemaking process once the grapes are brought to the winery?

Slightly crushed grapes, stems and all, goes into the qvevri, whereupon alcoholic fermentation begins naturally in the next three days and continues for 2-4 weeks at which point the cap falls. Punch-down happens usually about twice a day during alcoholic fermentation; once the cap falls we remove the reds from the skins and stems, and leave the whites on the skins and stems, place a stone lid over the top which continues to allow small amounts of oxygen in. Malolactic usually starts spontaneously quite soon afterwards, say in the next month – in 5 vintages we have never had it not happen. In spring, when the earth starts to warm up, we usually open the fermentation qvevri and move the wine into freshly-cleaned qvevri for storage until bottling – or bottle right away.

How are the qvevris buried in the ground? And where? Are they sealed? If so, with what?

The qvevris are buried in deep holes with earth and sand packed in tightly on all sides. Ideally, they are in a building in the vineyard, or nearby. They are sealed inside with hot beeswax and the lid of the qvevri – after malolactic – is sealed with wet clay coiled around the top and then a heavy stone placed over it.

How does the vigneron know when to unearth them?

The qvevris themselves are permanent unless moved for reinstallation, while the wine is usually racked when the temperature in the earth starts to warm up, at which time it can be bottled or moved into a newly-cleaned qvevris.

How are the qvevris cleaned?

There are many different means such as used cherry-bark scrubbers as well as various other “old-school” tools, but if you put powdered lime rock with clean water it starts to heat up to a high temperature searing the inside of the qvevri and cleaning any small amount of bacteria that might be stuck in the pores. After this we pump in fresh water and pump out the old water until pristine. 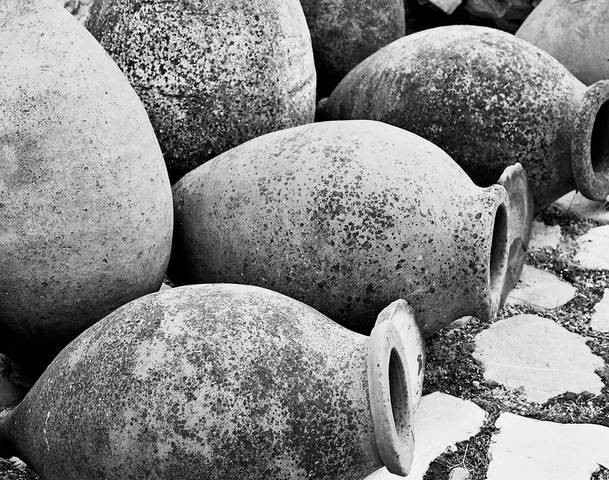 How many times are the qvevris used?

For many centuries—our oldest ones date back to mid 19th century, for example.

How would you say that the process of fermenting and ageing in qvevris affects the wine – compared to stainless steel or wood, for example?

Qvevri are porous and so closer in style to old barrels than stainless steel. The clay has pores and that takes us to the earth, but the earth is porous as well. Despite that, the wine in qvevri is subject to relatively minimal amounts of oxygen if well sealed (although they do receive some). In addition to breathing they are surrounded by a constant temperature on all sides allowing for slow gradual fermentation and relatively stable storage conditions. The technique of prolonged skin contact in the case of the whites makes the most obvious difference in terms of a strongly amber-coloured result and adds the tannins, polyphenols and a particular earthy body to the wines.

What proportion of growers (very roughly) are still using qvevris in Georgia?

Almost all families have a house in the country where there are qvevri, but due to intense labour involved in cleaning and maintaining them, many have resorted to making their home brew in plastic barrels or stainless steel. “Professionally” about 20 producers utilise qvevris, while maybe some 1 million families have them in their village homes of which probably 100,000 still use them.

What else should we know about qvevri winemaking?

That this tradition only works if you have very healthy grapes and a good strong yeast population. If you intervene too much in the vineyard or cellar you will likely get stuck fermentation or other problems, but if the grapes are in great condition and you don’t let them ripen “too much” – pick, say, at between 22 and 24 brix – then nature does the rest for you.

What makes Georgian wine so interesting and individual is a combination of the nature of the qvevri itself and the age-old technique in using it allied to the unique grape varietals, the prolonged maceration on skins, and the special growing regions with their various terroirs.

Interested in finding more about the wines made from qvevri that we bring in? Contact us directly:

Wine is Politics: Part One

Wine Labelling – The Argument in a Nutshell (Part 2)