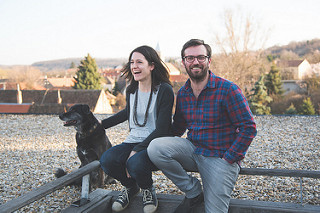 Franz Weninger and his father switched to BD farming in 2006. They originally planted Furmint in Austria over a decade ago, but the vines were hit by frost – so 2018 is the first vintage of this wine.

Franz views Furmint as the white equivalent to Blaufrankisch, a wine built on the backbone of high acidity. Furmint performs very well in Austria (albeit on different soils to those of Hungary which tend to have a volcanic basis). Michael Wenzel in Burgenland, for example, makes one of the best dry Furmints anywhere – this is an equally good example.

Franz has already been growing Furmint 15 km across the border in the family vineyards in Sopron in Hungary. He loves Kalk, chalky limestone that runs in seams through Mittelburgenland. More and more of his Blaufrankisch wine is from vines grown on the limestone soils of Ritzing. The soils lend beautiful natural acidity to the wines.

Furmint performs very well in Austria, albeit on different soils to those of Hungary which tend to have a volcanic basis.

The quality of farming is paramount. The Weningers use cover crops to control growth in the vineyard and they prefer not to do green harvest, believing that natural wine is achieved through natural balance in the vineyard. Nettle, chamomile & horsetail sprays are used; they would like to eventually use teas made just from the plants that grow between the vines. Eventually (possibly) they would look to use sheep to graze between the vines and change the canopy systems.

The Furmint grapes are destemmed with slow pressing to allow oxygen contact with the must, followed by natural settling. With an ambient ferment in the cool cellar, and a full malolactic, the wine then spends eight months on the lees without racking. The Furmint is fermented and aged in big barrels (1,900 litres) of Austrian oak which helps to round out the acidity. Since 2016, Franz has tried to make all his wines without the addition of sulphur, but with this wine he was compelled to dose it with small amounts on two occasions.

Franz views Furmint as the white equivalent to Blaufrankisch, a wine built on the backbone of high acidity.

2018 Furmint demonstrates real verve and pristine purity. The nose suggests white flowers and water over stones, the palate bristles with cut lime and then hits you with a saline thwack. The wine is light – abv of 9.5%!! – but lingers and has a fine structure.