As some day it may happen that a vigneron must be found,
I’ve got a little list — I’ve got a little list
Of Georgian growers who bury clay pots underground,
And who would certainly be missed — who would utterly be missed!
There’s the Chateauneuf growers who have…well, you do the maths —
You won’t find their wines in tiny corner caffs —
And the skin contact merchant whose wine is more orange than yellow—

With apologies to Gilbert & Sullivan 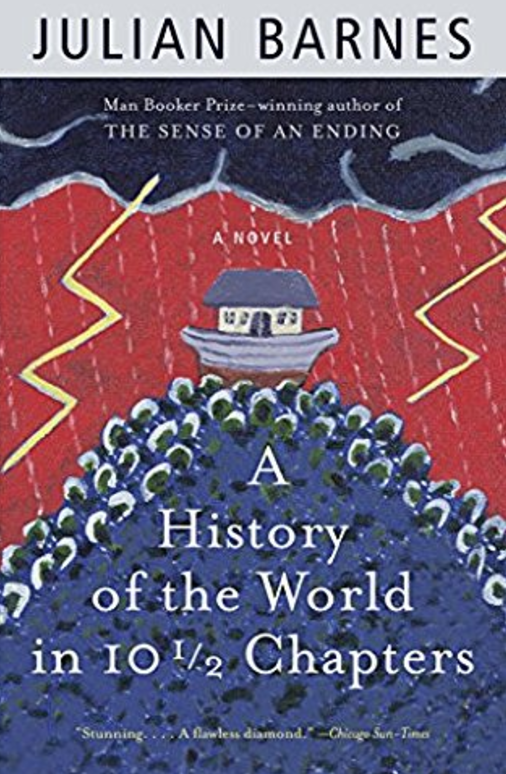 Julian Barnes wrote a brilliant book of short stories called A History of the World in 10 ½ Chapters. Here’s our partial view of…

We are fixated with Gamay –from 4 continents (c’mon Chile and China). Our gamme of Gamay includes epic examples of Fleurie and Morgon amongt the 10 crus, supplemented by frolicsome peppery quaffers from mountain heartland of Auvergne & Forez, easy-on-gum carbonic juice sliders from Touraine and slammable examples from Oregon, Oz and South Africa. The last of which is called Thirst.

We get high on mountain wines – Alps on Alps arise with our sky-scraping Blanc de Morgexes (they hail – or snow – from Mont Blanc, named after the fancy biro); we lava a nice bit of altitudinous Etna (Vino di Anna) and we climb to the Garnacha heavens on the Spanish Main with Comando G & Alfredo Maestro. Everything’s looking peaky! 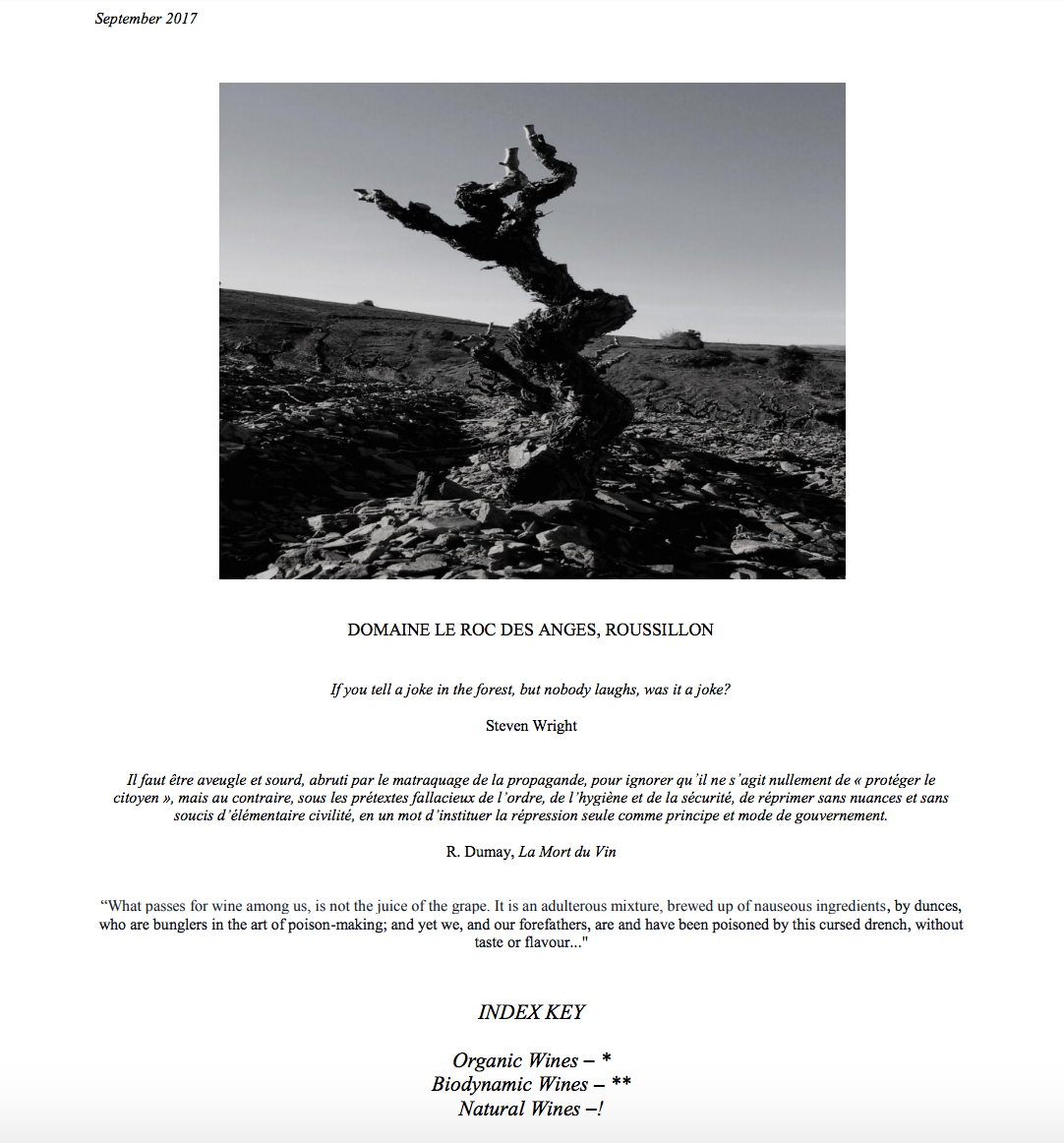 Defender of wilfully obscure autochthonous grapes – Try saying after a few beakers. If Nirvana headed the west coast grunge scene, we are leaders in the Savoyarde Gringet scene. You like the lesser-spotted Menu Pineau, Enfariné, Albarin, Rojal, Minella, Chkhaveri, Mayolet, Prie Blanc, Robola, Zelen? So do we! Hens’ teeth r us.

Our world is going to pot –or, to be more precise, to giare, qvevris, tinajas, dolio. We even held a tasting dedicated to “feats of clay”. No oak, all jar-jar. From Georgia to Friuli. From Sicily to Alicante. From Oregon to Chile. Pots of all shapes and sizes, some buried in the ground by the vineyard, others standing proudly in the winery. All potty.

A respectful pause to venerate old vines – how old is old though? Check out those wizened bird’s nest Santorini grizzlers clocking in at 500 years. Merely mildly ancient are the gnarled Carignan bushvines from the Roussillon and the Languedoc, 130 + y.o. Cinsault from California, ur-Gamay from Fleurie, pre-phyllox Malbec from Cahors (yes, they grow Malbec in Cahors) and innumerable other wines that should have received a congratulatory tele-message from the Queen several years ago. 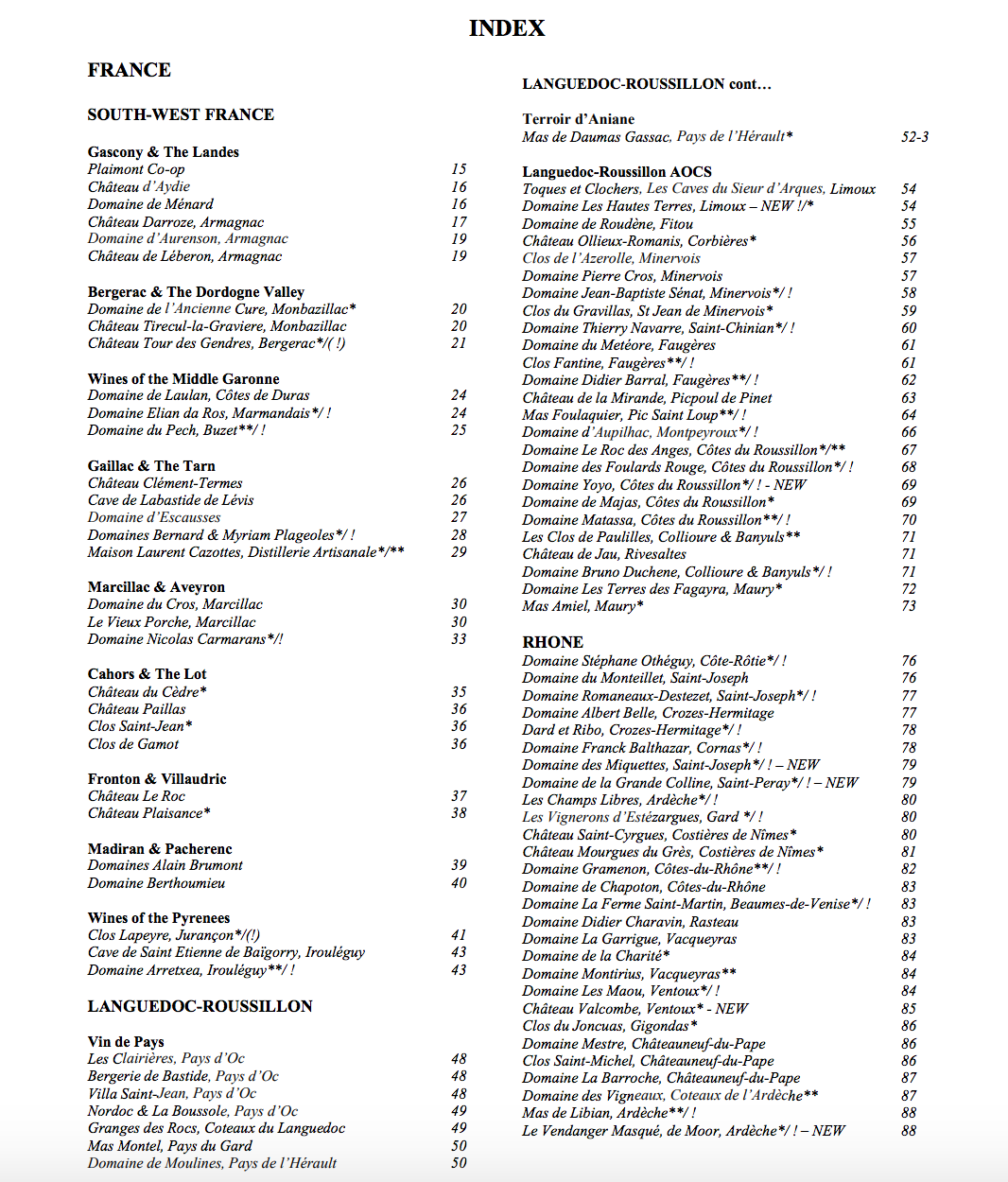 We embrace the infinitely bearable lightness of red wines – the aforementioned Ploussard has honorary pink credentials. Soifability is the unusual operative word for growers all over the world connecting a pale 11% abv Grenache from Craig Hawkins to a Grolleau from Jean-Francois Chene (at 8% it’s not technically allowed to call itself wine), a 10.5% Dolcetto from Principiano. Partida Creus’ VN Tinto weighs in at deliciously insubstantial 10.5%. The empty bottle being the best bottle.

We keep a Pet Nat zoo, to which new specimens are always being admitted. The United Colours of Cloudiness, from gently prickly to pretty zippy, from bone dry to sweetly tender. Refresh with light and fresh. Le crunch. 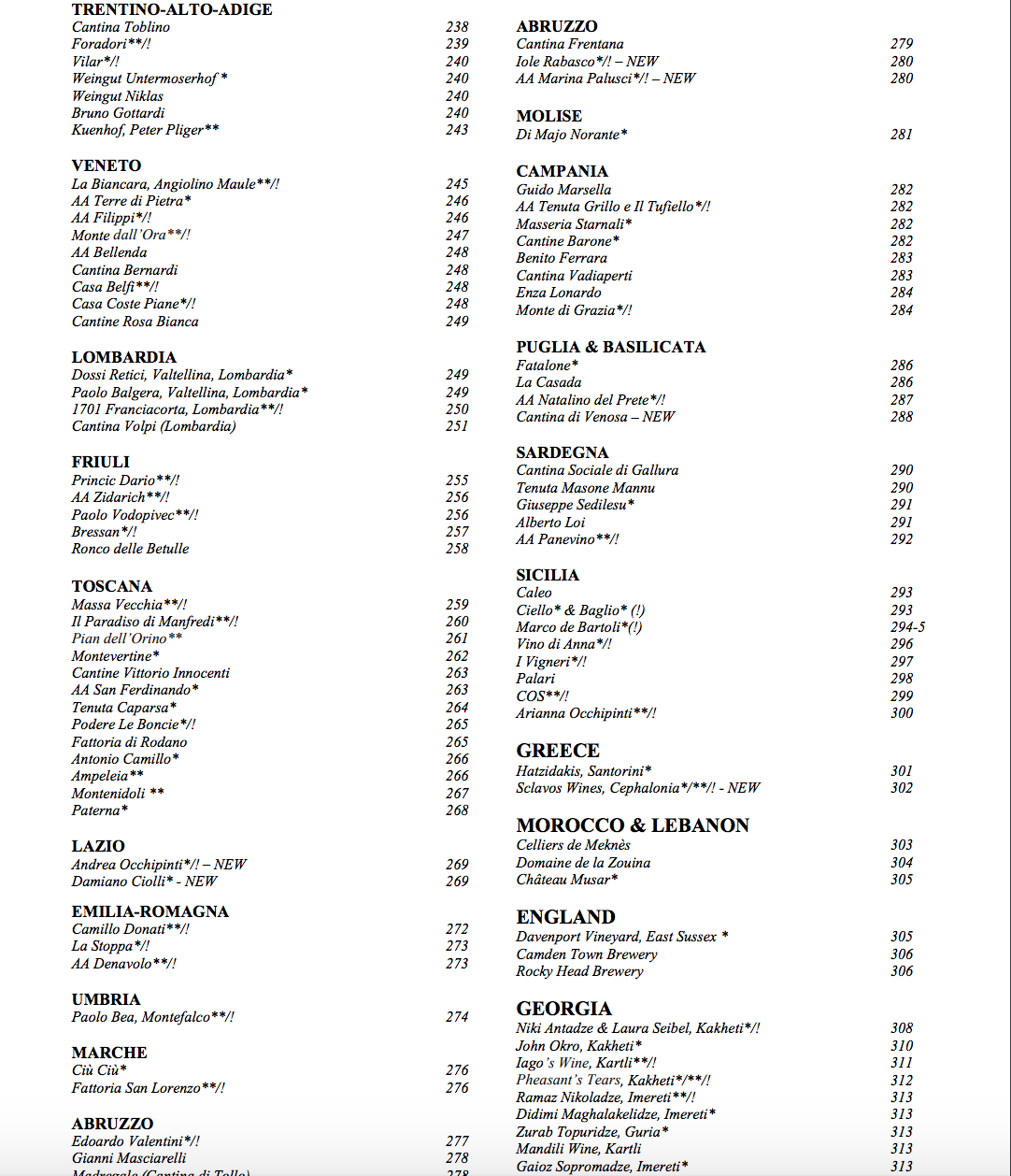 Discover the birth place of wine – Uncork the Caucasus with nine Georgian growers. This is qvevri central, those beautiful terracotta clay pots buried in the soil in which the wine gestates over the winter. For a small country there’s an almost unfathomable variety of grapes and styles.

Sherry, mon amour? Check out nutty options – salted almonds (manzanilla) to toasted walnuts (oloroso). For a further oxidative twist throw a lasso around the vins jaunes from Jura. And for a different nutty style the solera Marsalas from Marco de Bartoli are more than worth the detour.

Name that blend with Patrick Sullivan. Strange brews of the eye of newt, leg of toad ilk. Take Jumpin Juice, Bonkers and Haggis Wine respectively and ask what’s in your glass. It’s for Patrick to know and you not to find out. Are they tinctured whites, middling roses or pale juicy reds? And does it matter?? 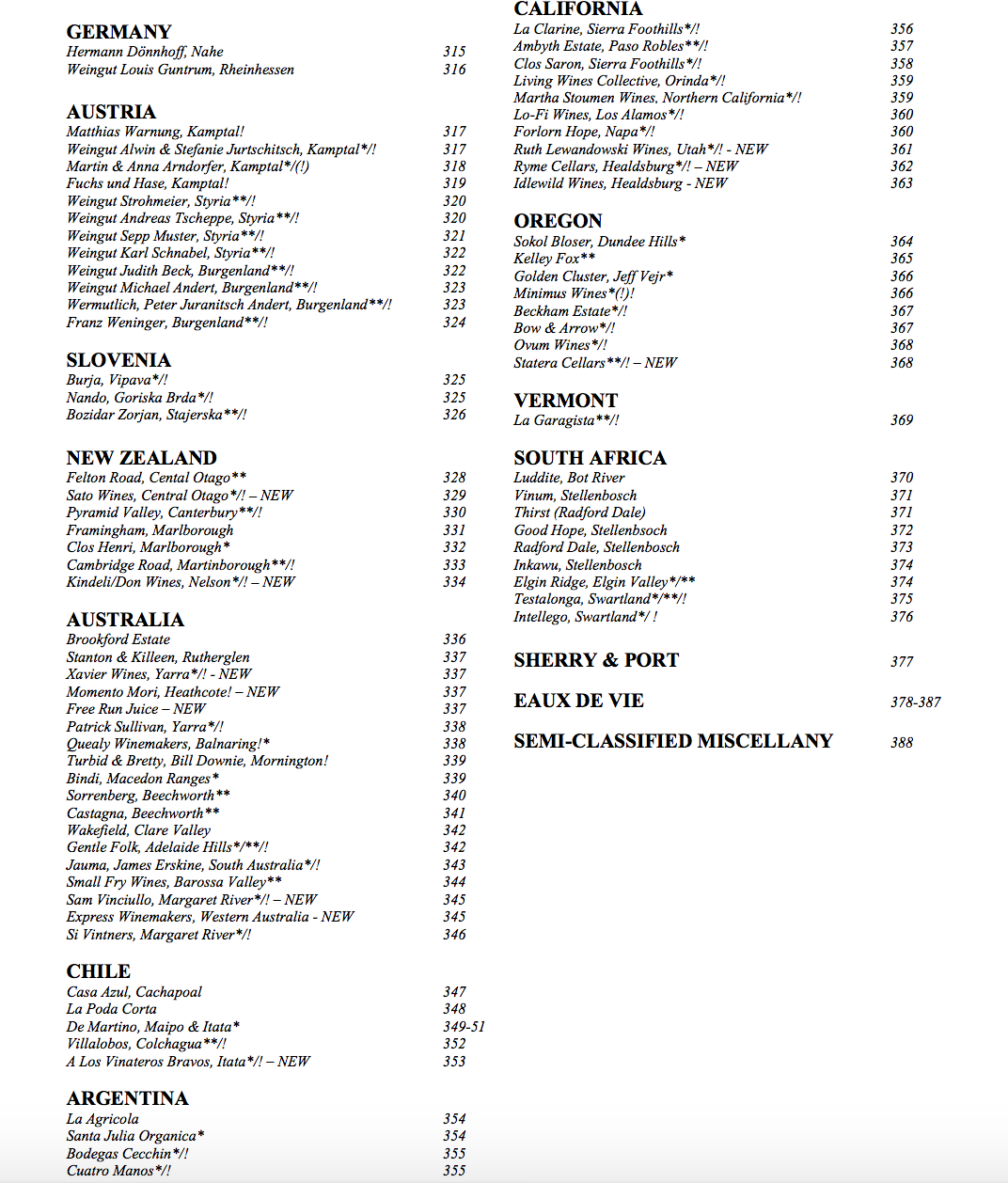