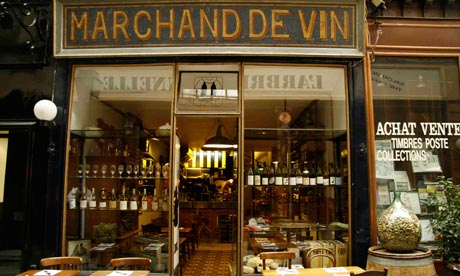 Racines – the name of a famous wine bar in Paris, plus a cuvée from the inimitable Claude Courtois. From people who give hoots about roots.

Racking Off – The result of spending too much time in a damp cellar. Also known as Racking Cough.

Raisins d’Etre – Grapes that have philosophically justified their own reason for existence.

Rancio – Rich maderised quality in certain liqueur-style wines and brandies. At its own most unflattering might be described as a “badder bitter butter”, more positively as “a touch of classy nutty slack”.

Ratings – Marks given to wines at tastings on board cruise ships.

Raunchy – Beulah, peel me a grape.

Champagne: radical new harvest rules
Apparently 40% of the money will be left on the vine and fewer bubbles will be allowed in each bottle.

Wildfire in California vineyard could have been caused by ‘bird-bomb’ firework
Napalming that family of sparrows could have been a slight overkill, admitted one viticulturist.

Just Say Nine
Speaking of publicity, the 2009 vintage in Bordeaux is already being slated as having the “best publicity” since 2005.

You’ve Been Had
A leading UK off-license chain admitted that their three for two gimmick was simply a ruse to get people into the shops to buy jumbo bags of ready salted nuts.

Name of a Name!
Three wine competitions have merged into one, which will now be known as the Decanter International Competition of Wine And Drink: DICWAD

Ten Green Bottles Standing On The Shelf
Having supported the pioneering of the lighter glass bottles to save the environment, supermarkets are asking their oenologists to make lighter wine. Another idea being experimented with is putting less liquid in the bottle. Australian wine makers are said to be very much in favour of this development as the naturally high alcohol levels in their wines would more than compensate for the smaller volume of fluid.

Rinse the spaghetti pieces to remove the starch and then hang ?em high to dry. Bring a pan of water to the boil and drop in the spaghetti and the crow. Add a fistful of dollars and the magnificent mussels, dead or alive. After only a few minutes turn the heat to low and introduce the good wine, the bad eggs and the ugli fruit. Simmer enigmatically. Now, though narrowed eyes, add a few dollars more, the beer and the parsley and cook for a further ten minutes. Strain and serve, sprinkling the dish with the tea, grated roots and grit. Add the sauces to taste. Eat at sunset.

Recreational Bath-time Dreaming – A blissful state wherein the protagonist fantasises about the wines he or she will buy/drink/cellar.

Reduction – For several years the wine fault of the cognoscenti, who would either dismiss the wine out of hand, pummel the glass as if it was a cocktail shaker or take out their tarnished coppers, drop ‘em in the wine and make a wish.

Redux Potential – A wine that keeps coming back despite your best efforts to swallow it.

Remplissage – An important part of oenology where the wine is padded out with extra flavour.

Le Remuageur – A questionable character in the French move: Vatman

Rentaquotitis – See also Chapoutier, Bettane, Parker et al whose utterances are nothing if not oracular (think tablets of stone crossed with burning bushes). In the immortal words of Mr Bennet in Pride and Prejudice to his daughter, Mary, “You have delighted us quite enough”.

Research Incontrovertible – Statistics disgorged and obvious conclusions drawn in order to prove that we are drinking more than we ever did.

Restaurant Wine Lists – ranging from the blackboard in a bar to the ancient leather-bound tome in a stuffy hotel, which, whereupon you open it, a colony of moths flies out. The best lists exhibit a sense of discrimination in the wine buying; they will be sympathetic to the style of cooking in the restaurant; they will tend to contain relevant information about the grape variety and the style of the wine. See also Great Fiction and Recreational Bath-time Dreaming.

Revolution – When I first became interested in wine I was instructed to taste in a certain way, to break wine down into its constituent parts and to assess analytically (and dismissively). Cleanliness was next to godliness; true wine would never, and should never, deviate from the “tasting chart norm”. Every professional I knew was educated in the same system and subscribed to its scientific and philosophical certainties. I deferred to my elders and betters, supposing that their experience conferred knowledgeable discernment and because I had always been inculcated to believe that correctness was the final unanswerable proof. Now I realise that conservatism has become systemic – educators and experienced journalists have literally told me “I’ve been drinking wine for decades and I don’t expect to have to relearn what is good”. It is naturally upsetting to have one’s preconceptions challenged, but education, if it is to be of value to us, is about constantly questioning and confronting received wisdom. The deference in the wine world to traditional certainties is actually a lazy complicity. Nothing is – or should be – sacrosanct.

Rhoditis – A skin condition caused by overconsumption of Retsina.

A: One has flapping fits, the other has fitting flaps

A: One is a rest for pens, the other is a pest for wrens.

Because you cannot ride either one of them like a bicycle.

Q: What asks questions while twisting and turning?

A: An inquisitive riddler.

Riedel – Schmiedel. These guys can certainly blow glass. There’s a tulip for Burgundy and one for Bordeaux, another for Barolo and for the Syrah grape. That splintering sound you hear is your collapsing bank balance as you try to keep up with the latest Riedel musthave varietal glass release. Apparently, when they run out of grapes they will go on to blends.

Meanwhile, Alfred Schniedel has pioneered a glass so sensitive that it can tell when you are pouring the wrong type of wine into it. Schniedel claims that the glass has a symbiotic resonance with the individual molecules of aromas produced by different wines. He elaborates: “My glasses are now so finely attuned they can tell from the sound the cork makes when it is being pulled what grape variety is in the bottle and will automatically shatter if you try to pour the wine into the wrong type of the glass.”

Rkatsiteli – Planted in Georgia, Russia, Ukraine, Moldova, Bulgaria, Armenia and so forth. Makes robust wines especially when fermented and aged on the skins. Pronouncing this word hardens your arteries, drinking the wine dissolves them.

Doug Decants: Limoux and Oregon (as you do), plus Natural Resistance and Farewell to Patricia!

The Accidental Death of the Wine Writer