I love VA (with apologies to Randy Newman)

There is a little-known HM Bateman cartoon with a picture of me drinking a beaker of wine, supported by the tagline: The Man Who Liked VA In His Wine. On the floor, reeling, writhing and fainting in coils, are the massed bodies of several well-known wine writers.

When I am asked for a definition of natural wine, I default (or de-flaw) to placing that term into an easily-understood category.

My cat likes to hide in boxes. Wine categories also like to hide in boxes. Most wines fit into conveniently-shaped (square) boxes because we want them to, in order that we may more easily communicate certain essential facts about those wines.

If you describe them in a highly specific way, then you diminish the idea of spontaneity that helped to bring these highly particular wines to quivering life.

Natural wine is different. And perhaps it should be. It is, after all, 50 shades, and then some, of turbid vin gris. More accurately, these wines do not necessarily inhabit the usual colour, smell and taste spectrums as their more conventionally-made brethren. If you describe them in a highly specific way, then you diminish the idea of spontaneity that helped to bring these highly particular wines to quivering life. When talking about wines anyway, we tend to front-load our descriptions and describe wines as mere products resulting inevitably from a type of agriculture and winemaking methodology. We tick boxes, create charters and draw red lines so that we (and the consumers of these products) seem to know what we are talking about. But what if those lines are blurred; what if the idea of wine as a set of fixed principles, approaches and final numbers is subordinate to the perception of what (and how) we taste as individuals? What if a fault is really a flaw, or a matter of degree than a decreed absolute?

The natural debate centres on whether for a wine to be proper and right, it must be the sum of its assiduously-tamed faults. In this smooth commercial world, there is no room for error for taste, good taste, is on an arbitrated scale. One individual’s quirky vin is really society’s vinegar.

I do odd things. I love to drink the end of the salad dressing and taste its refreshing vinegary snap. I lick the spoon I have used to ladle mustard into a bowl and enjoy feeling of steam come out of my nostrils. And I drink some wines that have borderline manic VA. Cue Reverend Lovejoy’s wife to roll her eyes, throw up her arms and plead: “Will no-one think of the children??”

When professionals assess wine, they may have the fainting thrice-filtered angel of oenological purity on one shoulder (their training) and the quiet demon of devil-take-it-I-like-what-I-like on the other (their taste preference). Is this a case of east is east and west is west, oenologically-speaking, or can these twain e’er meet?

To the nub of the matter. Volatile acidity (VA) is caused when acetic acid builds up in wine when there’s too much exposure to oxygen during winemaking and is usually caused by acetobacter (the vinegar-making bacteria!) metabolising with ethanol to produce ethyl acetate. Volatile acidity is considered a fault at higher levels (1.4 g/l in red and 1.2 g/l in white) and can smell sharp like nail polish remover. Before you dump your cache of Chateau Rayas or Musar down the sink, know, however, that at lower levels, VA may indeed add some va-voom to a wine, endowing it with fruity-smelling raspberry, passion fruit, or cherry-like flavours. Wines which undergo long fermentations (that is a month or longer), such as Amarone, Barolo and certain skin-contact wines, generally accrue higher levels of volatile acidity. And where would we be without those? Certainly in a less beautiful world. This form of acidity often tempers the high alcohols and jammy fruits of those wines, providing the scorpion-flick at the end of a tiring palate, prompting you to return for another glass. For me, many a tough old bird has been rescued by a pleasing dash of sourness. Je vin-regrette rien evidently!

The natural debate centres on whether for a wine to be proper and right, it must be the sum of its assiduously-tamed faults. In this smooth commercial world, there is no room for error for taste, good taste, is on an arbitrated scale. One individual’s quirky vin is really society’s vinegar.

By creating legal criteria and using the excuse of protecting the consumer (always invoke the rights of the consumer!) and stipulating that a wine has to be below a certain VA threshold in order to be allowed to be sold, the bureaucratic tail is forever wagging the wine dog. Calling VA a fault, and all wines that have a certain level of VA, faulty, slams the door on an interesting discussion.

This is not a faults or even a flaws seminar, but I suspect that one reason that VA is a bugaboo is that it is technically preventable. Ergo (the argument goes) if it could have been prevented…then it is a fault. (Except, possibly, in the examples where the vigneron allows/uses VA to “season” the wine in a particular way.) 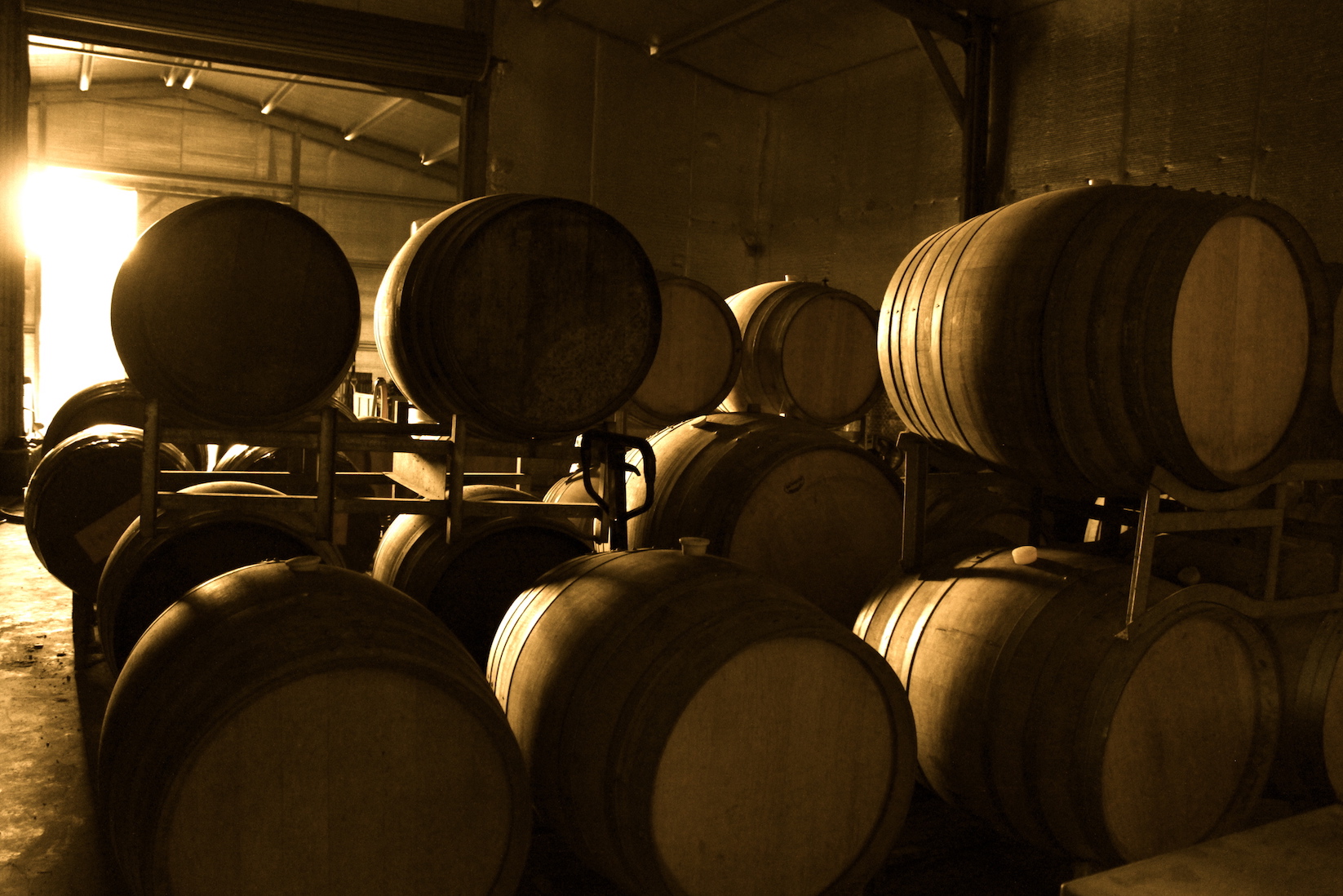 Preventing VA hinges on a combination of chemical approaches. Cleanliness is preferential to godliness in this world and several sterilising procedures seem to end in a huge puff of diabolical sulphur. To insure against VA the following are recommended. (Now for the science bit.)

Be still my sparging heart. Vigilance and winery hygiene are one thing, but the above-mentioned annihilating battery of measures may serve to deprive the wine of the very life force, that quirky individuality, that we so dearly prize. Sterility may be a fine thing in a laboratory, but a winery can be a place of beautiful natural transformation and witnesses the birth of a living liquid (flaws and all).

I asked Lena Sarnholm for her thoughts on VA. Lena works in a natural wine bar in Sweden, is a seasoned veteran of wine fairs, and has done stages in various natural wineries.

In wine literature, volatile acid is classified almost exclusively as a defect, something undesirable that spoils the experience of the wine. Conversely, new oak and its dominant flavour effects, on the other hand, is often described in positive terms.

But if you happen to appreciate the intricate cauldron of balsamic vinegar aromas and flavours, and feel vaguely nauseous on account of excessive vanilla and coffee tones in the fermented grape must – is it wrong of me to say so, to defer to the narrow “received” taste standard? Is there right and wrong in the wine world, which after all is based on something as individual as personal taste?

Of course defects exist, but in my opinion VA does not belong with them. If the winemaker consciously makes his/her wine in this style – which is also a bit like playing with fire (impressive craftsmanship!) – how can anyone say it’s wrong? You can like it or not, and that’s another matter. For me, too much barrel character is a defect. But what’s the problem here? I can choose not to drink that wine.

Volatile acids can act like a spice. Exactly what makes the wine interesting and justifies drinking it. That ineffable little hook. I compare this to art and art-appreciation. A creation can be “too beautiful”. If there is no scratch or tear, you can get bored with it and want to move on. There must be a resistance, something abrasive*. And isn’t that what makes life interesting –the detours off the highways?

This is akin to wabi-sabi**.

This reminds me of the narrator’s description of Maud in Tennyson’s eponymous poem. “She has neither savour nor salt… faultily faultless, icily regular, splendidly null” as good a definition of the orthodoxy of homogeneity as I have ever read. And that rather than staid perfection we are looking for a wine that reflects the context in which in it was grown. Each year brings a lot of uncertainties and it would be useless to try to ignore them.

Volatile acid, however, is not something that I actively seek in wine. It’s not something I analyse. I feel its presence, like an energy kick, as in “oh, now something is happening!” It gives the wine another dimension, a strange kind of complexity.

I often encounter it (VA) in natural wines from the Loire, but most recently in Nacho Gonzalez’s orange beauty from Galicia. I’m sure it is not for everyone, but in the wine world there is something for everyone. The couple behind me in the bar declined this bottle and thought it tasted of vinegar. Frankly, I loved it.

And so we return to first principles. Is there right or wrong when we all think so differently? Is it not about humility and understanding of our own tastes and the endless differences of wine? I can understand that some people can’t abide VA in their wine; it is against all traditions and perceptions of what a wine should be like.

Ultimately, it’s about getting to know your own palate and daring to stand by it.

My own threshold for VA is very high. So far I have not tasted a wine where it has been too extreme for me – not even that bottle with the winegrowers in Paris – which mistakenly happened to be a vinegar – made me spit! Nor did the other sommeliers either, for that matter. Sure, we looked at each other waiting for someone to mention the strangely high acid in this “wine”, but no one said anything. Though that’s a different story!

The term wabi-sabi suggests such qualities as impermanence, humility, asymmetry, and imperfection. These underlying principles are diametrically opposed to those of their Western counterparts, whose values are rooted in the Hellenic worldview that values permanence, grandeur, symmetry, and perfection. …

Wine that is a product for the sake of being a product is deemed capable of perfection, be that perfection bland, clean and consistent, or evolved and architecturally magnificent. Wine that is rooted in place, vintage and the real world, can be fragile, edgy, mutable and asymmetrical.

Sterility may be a fine thing in a laboratory, but a winery can be a place of beautiful natural transformation and witnesses the birth of a living liquid (flaws and all).

The other week I was sitting with a colleague in a restaurant, where we sampled – and drank – an array of natural wines, the last one of which was bordering on vinegar. This was on the high side – even for me. Just to make sure, I took it a sip. And then another. And another. I said to my colleague: “The VA is off the scale, right?” He replied: “Yes, but we would drink it though.” Looking at my empty glass, I reflected that this was indeed the case for this salad-dressing-guzzling, mustard-spoon licking palate. And it was the only wine that we actually finished on the night. Which pleased the restaurant, if not the lynch mob of oenologists and wine educators waiting outside.