Who wants to know? Well, vegans, presumably. This is not a question that keeps me awake at night, but I know that message boards on forums are full of it. And full of it.

As with anything, it boils down to definitions and what one means by veganism, and even what one means by biodynamics. Those who argue the toss, generating more smoking humus than light, tend to adopt extreme and impossibly literalist positions and one ends up arguing about the merits or otherwise of fruit flies in fermentations. But maybe that’s the point.

When we think (loosely) of vegan wines, we tend to think of the substances that may have been added to the wine, especially the egg or gelatine-derived fining agents. However, since even the most conventional mass-produced wines can be fined with bentonite, vegan-friendly/suitable is not really a satisfactory description of the credentials of these wines. In other words, by the definition of what is added to the wines, the vast majority of natural wines are vegan, as are many conventional ones. There has to be more to it than that.

Now let us first dispense with the mischief-makers. Critics of biodynamics do love a good ad hominem attack on Rudolf Steiner himself, treating his writings and lectures as scripture that can be minutely deconstructed from the viewpoint of a modern sensibility. Nietzsche couldn’t teach ya about the raising of the wrist. Nor did Steiner refer to grape growing and vineyards in his lectures. To focus on Steiner, the man (of his time), his life, his other ideas and all the esoterica, is to miss the point that we are talking about fundamental farming principles.

Many of the treatments, for example, that Steiner proposed, were ideas (some age-old) that farmers might implement if they wished to, and could observe for themselves whether or not they worked. Steiner was arguing for an organic, observational and a holistic approach towards farming, offering various solutions for regenerating the dead soil. Unified theories of farming developed out of these lectures, but they had been around for centuries in any case.

The destruction of natural habitats is intentional in the monocultural world of conventional farming.

Biodynamics is an adaptation and interpretation of Steiner’s ideas. These ideas and practices have evolved over many decades to improve modern farming the better to accord with nature and its rhythms (my italics). Biodynamic certifying bodies intend that the concepts of biodynamics are more relevant to local communities, and to make farming a force for good rather than the abuse and exploitation of the land for human consumption, as a partnership between humans, animals and nature rather than a means to an over-productive end.

So, what is it that vegans specifically object to about in biodynamics? Is it the act of composting (which is part of most organic farming) or the use of the cow horn in which to condition the manure? Is it that animals are often used in a biodynamic farming and that veganism is morally against the use of animals in any farming endeavour? Is it that ploughing the soil is wrong, for example, because you keep a horse and use it for such labour? Should one use a tractor? Or should one always mow with a hoe? 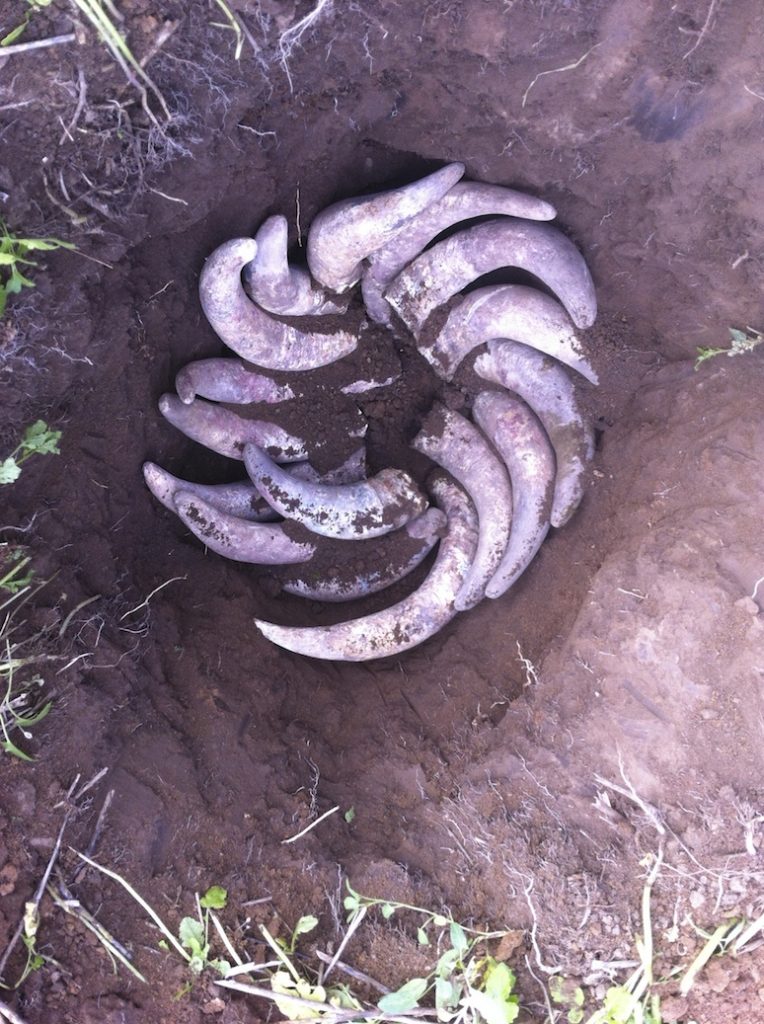 Certain myths abound. No cow is farmed or killed for its horns specifically to enable biodynamic farming. Horns are a by-product of meat and dairy farming, as is manure. Advocates of conventional farming might also assert that no animals are intentionally killed in conventional farming. Which is ridiculous. Because that’s exactly what pesticides do. They exist to exterminate life. Animals may also be killed and wounded by heavy machinery in conventional farming. We’re not just talking a bug here and there. We’re talking rabbits, birds, lizards, bumblebees. Their deaths were not intended by the individual driving that machine, they were the inevitable consequence of that kind of industrial farming regime. Finally, the destruction of natural habitats is intentional in the monocultural world of conventional farming.

So, assuming that vegans are not proposing the conventional alternative, do biodynamic and vegan philosophies actually oppose each other? It depends on both sides whether you go by the letter of the law or the spirit of the law. We might say that a whole lot of animals are alive right now because of the work of biodynamic vignerons. The plants that grow freely in biodynamic vineyards are home to the bugs, bees, spiders, snails, lizards, birds and whatever else crawls and flies, that wouldn’t have a home anywhere else otherwise. The biodynamic philosophy, in general, is not simply about preparations (which are optional), it’s about farming with nature. It concerns finding a way to grow what we need without moulding nature to our needs. It’s about preservation and restoration, not destruction.

This is biodiverse farming after all in its truest sense and should chime with aspects of veganism. Biodynamics is highly sensitive to the health of the living vineyard and the needs of the life forces that inhabit it.

Animal-free farming methods use no animal products or by-products, such as blood, manure, or other animal-origin matter, because the production of these materials is viewed as either harming animals directly, or as associated with the exploitation and consequent suffering of animals.

If we are going to apply rigid criteria to veganism, then we come to what is known as vegan organic (or veganic) gardening and farming, which is the organic production of food and other crops with a minimal amount of exploitation or harm to any animal. Vegan organic agriculture is the organic form of animal-free agriculture.

Animal-free farming methods use no animal products or by-products, such as blood, manure, or other animal-origin matter, because the production of these materials is viewed as either harming animals directly, or as associated with the exploitation and consequent suffering of animals. Some of these materials are by-products of animal husbandry, created during the process of cultivating animals for the production of meat, milk, skins, labour. Anything that promotes the animal husbandry industry is something that most vegans find unacceptable. Vegan organic growers maintain soil fertility using green manures, cover crops, green wastes, composted vegetable matter, and minerals. This requirement for natural fertility in the soil is not a long way from organic and biodynamic farming in principle.

In the end, we must respect that whereas some who think of themselves as vegan will accept wines that have no animal or dairy additives in them, others will dig deeper into the production methodology and audit a wine’s vegan credentials on the basis of any “animal involvement” in the process. For me, biodynamics is more than horns and cow shit; it is a proactive and conservationist approach to farming. The restoration and stewardship of different kinds of the land and the life on the land, from the microbial level to larger fauna and flora, helps the planet in its own way, and is certainly a green philosophy. These then seem to me congruent philosophies, even if aspects of biodynamics might have certain elements that some vegans would have difficulty swallowing. Biodynamics and organics will make use of animals in the farming production, through grazing, natural pest control and manuring. This is the cycle of life. Vegans can only assess the quality and nature of these interventions and decide whether or not to consume products such as wine, based on their personal consciences.

Georgia on my… palate

Keep on Punching: The Rise of Testalonga Wines

New Wines in our Winter Wonderland