The estate was established by Marc Ollivier in 1984 and Remi Branger joined him in 2007, followed by Gwénaëlle Croix in 2012. Marc had experience in the winemaking world from working for several years with his uncle in his winemaking estate which is in the same area as Domaine de la Pépière. Remi studied viticulture before joining Marc. Gwénaëlle never had any contact with the winemaking world (she was trained as an engineer, and had worked in industry for ten years before entering the world of wine). Marc retired in 2019, leaving Remi and Gwen to run the domaine.

Over the last decade, there has been a push by the appellation to create cru designations in hopes of bolstering Muscadet’s reputation. Pépière was way ahead of the curve here, with half of the estate’s 42 hectares falling within the crus of Clisson, Monnières-Saint Fiacre, Château-Thébaud and Gorges.

How do you like them grapes: Melon de Bourgogne as well as a little Cot, Cabernet Franc and Merlot.

In the vineyard: Treillisage on three wires in order to achieve the best ripeness possible through more foliage, which enrich the berries in sugar. This technique, along with short pruning, ensures that they don’t have to chaptalize (add sugar to the juice) in the cellar. In 2006, they stopped using herbicides, opting instead to plough and lightly rake the soil. In 2007, they took their organic work a step further by treating vines only with copper, sulphur and several plant-based preparations. They harvest nettles, comfrey and horsetail along the Maine River and use these plants by steeping them, fermenting them or in the form of decoctions. Biodynamic preparations are used to reinforce the vines against disease and help the micro-biological life of the soils. The whole estate is certified in organic viticulture by AB and is in transition to a biodynamic certification. 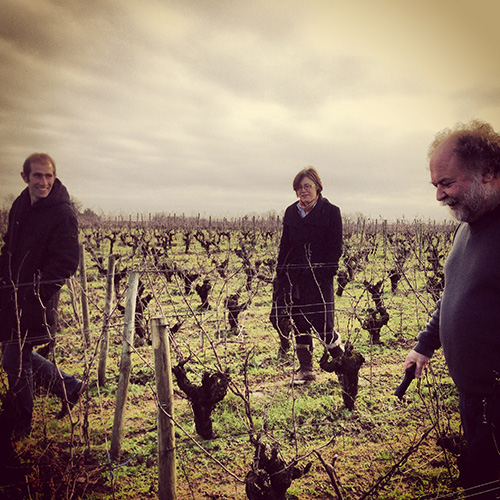 In the winery: Grapes are manually harvested and are fermented in underground vats lined with tiles with indigenous yeasts. Wines are left for 6 months to three years in the fermentation vat until bottling. The wine is racked to prevent the malolactic fermentation. Light filtrations over clay, no fining and a small amount of sulphur is added usually in December or January (but not at bottling).

QI:  One of the select domaines who have dedicated themselves to show the true potential of Muscadet’s terroirs. Over the last decade, there has been a push by the appellation to create cru designations in hopes of bolstering Muscadet’s reputation. Pépière was way ahead of the curve here, with half of the estate’s 42 hectares falling within the crus of Clisson, Monnières-Saint Fiacre, Château-Thébaud and Gorges. At the time this was simply Marc, Rémi and Gwen picking the most interesting vineyards. And to give perspective, the average independent Muscadet estate only has holdings of 15 to 20% within the crus. While 50% of the estate’s vineyards fall within the cru limits, cru wines only represent an average of 15% of Pépière’s annual production. In some vintages they will produce less or no cru wines at all if the quality is not there. Aging on the lees are always longer than the mandated 17 months, lasting a minimum of two years. But Marc, Rémi and Gwen have not been afraid to push it to 36 or even 48 months in some cases. All grapes within the crus not deemed up to snuff (again, around 85%) go into the entry level La Pépie cuvée.

Food match: The Muscadets are ideal with oysters, sole, halibut and richer fish dishes (especially the Briords). The light red is delightful with chicken liver pate or a young goat’s cheese.

How To Train Your Dragonfruit Taster