In part one (which can be found here) we discussed the origins of biodynamics and explained the various preparations whilst attempting to demystify lunar cycles and the planting calendar. We continue by returning back to earth and looking at the soil and its central role in biodynamic precepts.

Back to earth. Nitrogen plays a crucial role in the health and growth of all plants, helping photosynthesis, a process that involves using energy from the sun to break down water and carbon dioxide so that sugars are formed. These sugars are then used as food for the plan and the by-product of the process is oxygen. Nitrogen is also one of the main components of amino acids, which form the proteins that plants need to stay alive. Too little nitrogen often results in withered leaves that are usually yellow in colour, symptomatic of slow photosynthesis rates, while too much nitrogen can prevent other essential nutrients from being absorbed by the plant. This is why maintaining just the right balance of nitrogen is an essential part of growing a healthy plant. To improve or add nitrogen to the soil is to add animal or plant by-products to the dirt with which you’re working. These varieties include composted manure from cows, although there are also plant-based alternatives. “Biodynamic preparations enable the composted matter to stabilise and fix the nitrogen which is volatile. Their effect is to hold the decomposition process in a disciplined way to prevent nitrogen loss. If a compost heap gets too hot, it loses ammonia, a nitrogenous substance. That’s like money dropping out of your back pocket.”

Soil health is the key to organic and biodynamic farming

When soils are alive with healthy fungi, bacteria, and protozoa, water infiltrates the ground better and holds moisture longer, organic matter breaks down faster, nutrients are more readily available, and vine roots penetrate deeper. This means when tough conditions such as dry spells arrive, the plants are better able to cope with the adversity because there is a bigger supply of moisture and nutrients for them to access.

Humans don’t make wines: microorganisms do. This is a sacred world we don’t understand anything about! ~ Stefano Bellotti

Mycorrhizae and the deep sense of humus

Mycorrhizal fungi work below the surface of healthy diverse vineyards, their filaments tunnelling through the earth, taking available soil nutrients and converting them through enzymes into food for the vines. Mycorrhizal fungi expand as they mature, connecting all their surroundings — potentially hundreds of acres — and creating a food web that balances and strengthens the entire biome. Some feel that the symbiotic relationship to vine roots is an amplifier of terroir.

The aim of biodynamics is to enhance the health and vitality of the entire farm, both above and below ground, by stimulating these fungi through building the soil’s organic component, known as humus.

Humus acts like a sponge, protecting the vines from flooding through absorbing torrential rains, releasing the water over time as drought protection, reinforcing resilience. As humus builds in the soil, it creates another symbiotic relationship with the environment by sequestering carbon from the air, converting it into food for the vines, further promoting mycorrhizal fungi growth.

The extent of this interconnectedness, and the reasons behind it, are something that we are only just discovering. In his book The Hidden Life of Trees, Peter Wohlleben show us that the trees and forests around us not just as “lumber factories” but are wondrous organisms, as complex as any animal. Trees are, for instance, “social beings”, communicating with each other through their roots, thanks to the fungal “wood wine web” that permeates the forest soil, even sharing nutrients in hard times. Biodynamics is fostering and channelling the thriving network of micro-organisms to power the engine of the vine.

Almost every time I have visited a biodynamic farm, I have been enjoined to admire the sweet-smelling humus. To invert Lear, something must come of something, especially when the quality of soil is so good! Organic farming will produce good quality soils; biodynamics goes further and faster, perhaps because Demeter is more specific in outlining applications than the many organic certifying bodies. It is all still relative to the soil you are holding in your hands and smelling.

So many vineyards have become arid monocultures (cultured to a single plant type) over the last century. Trees, plants, grass, soil and water will have been removed to make way for the single crop. To enhance the efficiency of the monoculture, herbicides, chemical fungicides, pesticides and chemical fertilisers are utilised, often in toxic quantities, and in such a fortified environment the vine itself becomes a means to an end, a rootless fruiting machine, something that has or needs no roots, is not part of the community of nature, and when stressed, does not have the wherewithal to survive. To quote Luc de Conti: “The soil is a cadaver”.  Chemical farming is a cycle of abuse. The contrast to biodynamic farming could not be greater. Many are polycultural, growing a variety of crops. They may have animals wandering through the vines, and the vineyards, interplanted grass and many varieties of plants and flowers, the soils teeming with worms and bugs, and bird and animal life is present to complete the cycle. The vineyards are also either planted in clearings, or if anything has had to be cut down or removed, then it is replanted elsewhere with interest so that an ecological balance is maintained. 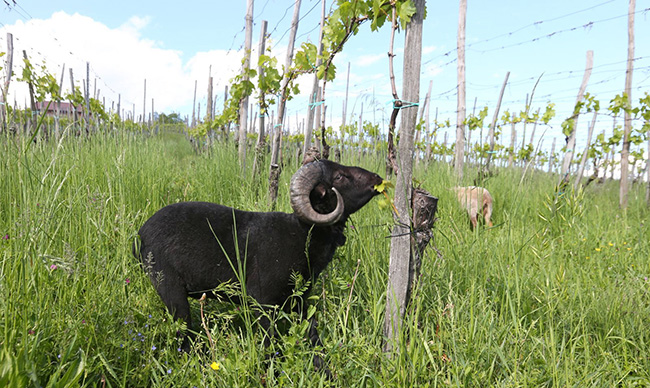 Before you take a warm shower of ethics, you have the right to ask whether biodynamic wines are any good for all this. Well, we would have to define good, or look at who makes wines from biodynamically-farmed grapes and assess the quality of those wines. The non-definitive answer is that biodynamic wines can be exceptionally good, better than their conventional counterparts. This may be to do with the quality of the farming, the lower yields and the grapes being higher in material. However, even biodynamically-farmed grapes can be unmade in the winery with yeasts, oak and extractive vinification on the one side and neglect on the other. It is preferable to say that each farmer has a take on biodynamics which they believe improves the vineyards and yields better quality fruit in the final analysis.

(A word about natural wine in all this. Making a wine naturally is meaningless without the underpinning of good farming, and that means organic or biodynamic methods are a prerequisite of proper natural winemaking.)

Biodynamic production is practised and certified in some 60 different countries. And in terms of wine, in every wine-producing country. Many producers may start with one small plot dedicated to biodynamics and analyse the results. They ask themselves: are the vines healthier, are the grapes better? Even if they can’t identify a causal link between biodynamic treatments and the results, they feel that the results are conclusive. Dozens and dozens of new growers are in conversion to biodynamics. I don’t believe that they have been brainwashed by the spirit of Steiner, but have worked through empirical observation to reach their conclusions.

A famous producer once said that if you followed biodynamic precepts then you would become a better farmer, because, by definition, you would naturally spend more time with your vines. That comes back to the idea that farming concerns observing nature, listening, sensing and conversing with your vineyard. I know farmers who talk to their plants and feel that there is a reciprocal relationship going on.

Philosophically speaking, biodynamic agriculture invites us to develop a conscious and creative conversation with nature. By observing, sensing, and listening to the land, we develop intimate relationships with our unique farm organisms and expand our capacities for perception, reflection, and imagination.

Biodynamics, therefore, is not a fixed recipe or set of prescriptions. Cultivating awareness strengthens our ability to work creatively with the dynamics of the land and wider bioregion to bring the vibrancy of the farm organism to full expression.

Many biodynamic farmers are motivated by a desire to meet the real needs of people and the Earth, which often extends beyond growing food. Most biodynamic initiatives seek to embody triple bottom line approaches (ecological, social, and economic sustainability), taking inspiration from Steiner’s insights into social, economic, and spiritual life, as well as agriculture. Community supported agriculture (CSA), was pioneered by biodynamic farmers, and many biodynamic practitioners work in creative partnerships with other farms and with schools, medical and wellness facilities, restaurants, hotels, homes for social therapy, and other organizations. Biodynamics is both a radical concept of regenerative agriculture and a potent movement for new thinking and practices in all aspects of life connected to food and land.

The ethical choices are laid bare everywhere you travel in wine country where you will witness the juxtaposition of conventional and biodynamic viticulture. The desertification caused by one; the rich biodiversity enabled by the other. 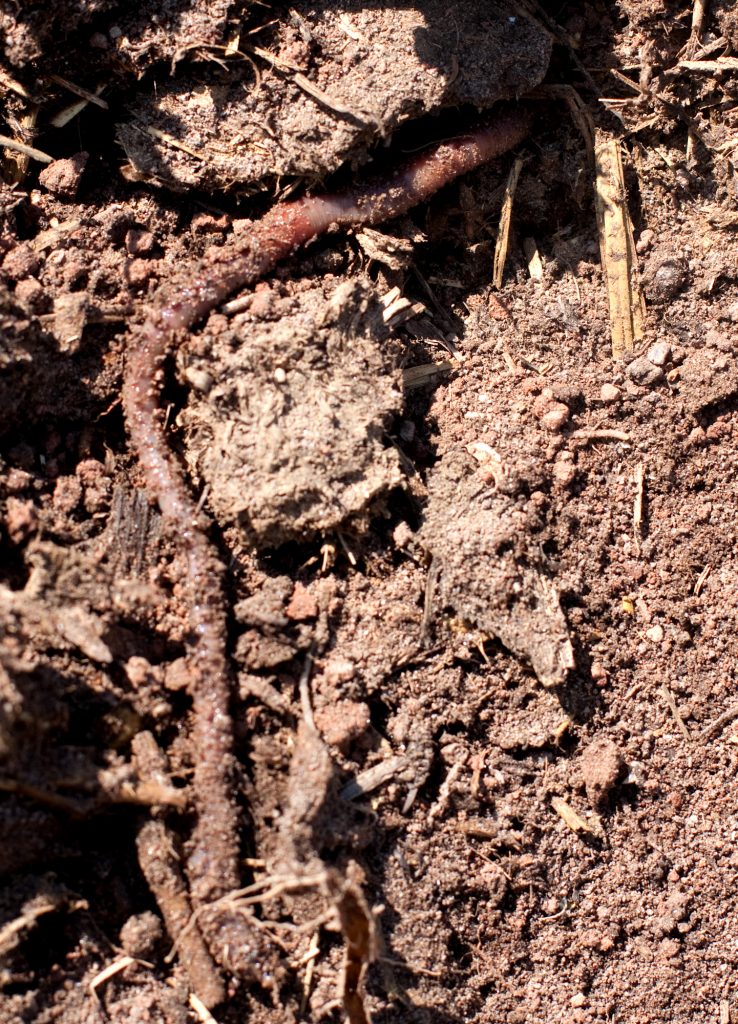 The standard full arsenal. If we go get a shovelful of earth here, and then one from just a few metres away, we’ll see they’re two entirely different things.

The colour’s very dark. It’s rich in humus. It’s not compacted. There’s an active digestion of the organic matter. For example, here there’s a large number of grasses that have been interred and digested.

Now let’s see the colour of the soil over there.

Much harder here to dig in with the shovel. I have to push much harder. Because the earth is more compacted.

No comparison in colour. It’s obvious that it’s much lighter. For example, here there’s the residue of a leaf that’s become peat. It’s totally asphyxiated. It’s all compacted. This clump is totally impermeable. It can’t absorb water or air. From a bacterial standpoint, this earth is much deader than mine. And where the shovel cut in, it’s all shiny.

Then, there’s how it smells. It stinks of laundry detergent. If I take a clump here, it’s all fungus.

Stefano believed that farming was an act of political will. Today, that is more than ever the case. Mankind has been exploiting the meagre resources of this planet for too long and is now reaping payback. By industrialising a fundamentally human activity, by seeking to extract more and more and by not giving back, man has created a natural imbalance, now manifesting itself in the severe climate crisis we are experiencing today. Biodynamic farming is truly a partnership, one where nature is given a chance to breathe and express its actual potential. We will have to work harder than ever restoring balance to the land, changing not only our practices as farmers, but our expectations as consumers. In a microcosmic way, if the farm can succeed by existing as a single harmonious entity, then it points the way – in a small sense – to the recovery of the planet itself.

When the Wine Tastes You