When you are in a country for a very short period you barely have time to get your bearings let alone taste enough wine to come up with a qualified opinion about the state of play of an entire wine culture, However, on the evidence of limited tasting and discussions with growers and one considerable wine expert, one may make a few broad assertions. 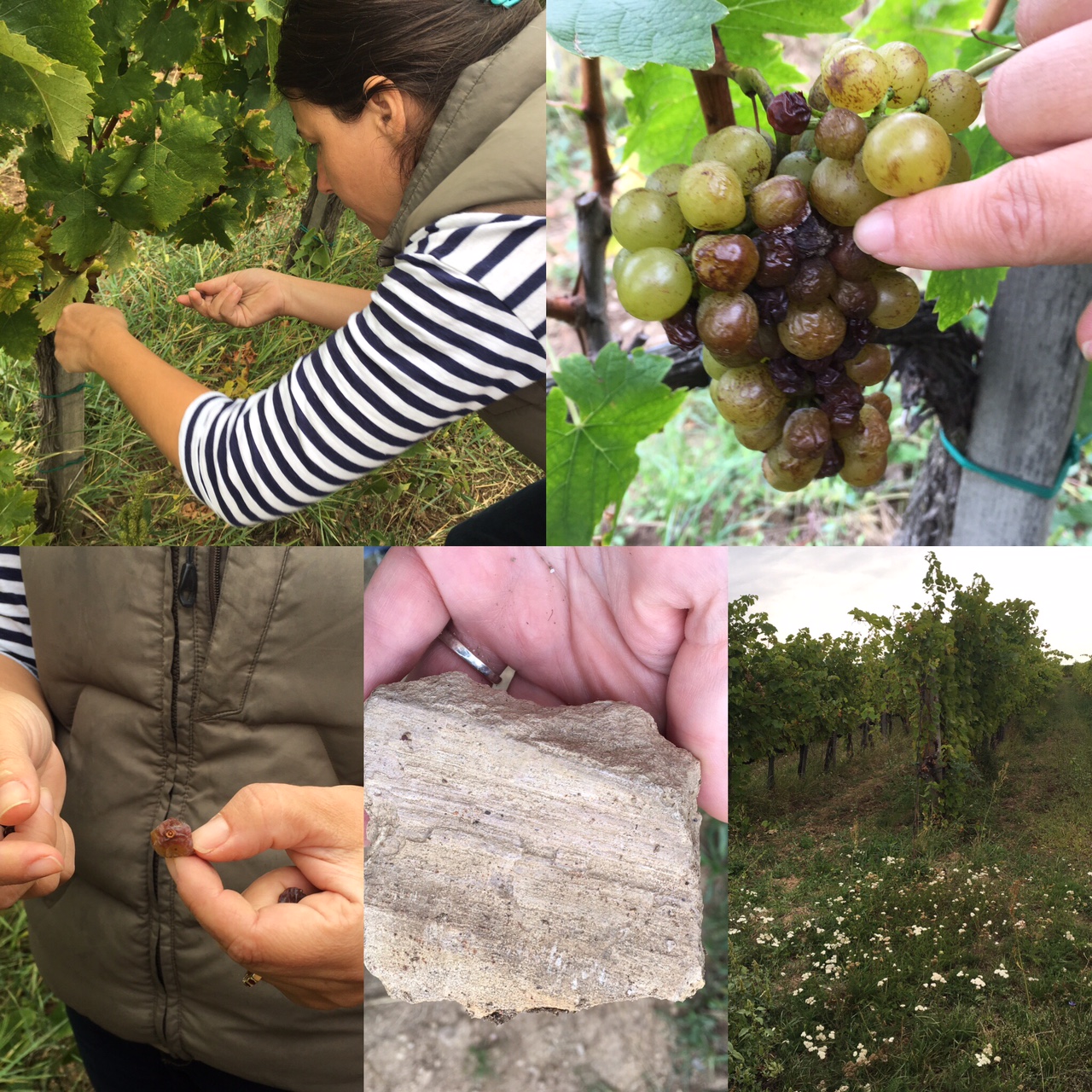 Before that, a potted wine history of Hungary. The Romans brought vines to Pannonia, and by the 5th century AD, there were extensive vineyard plantings in Hungary. Following the Magyar invasion of 896, Árpád rewarded his followers with vineyards in Tokaj. Over the following centuries, new grape varieties were brought in from Italy and France. Most of the production was white wine.

Hungary has always been best known for the sweet wines created in the region of Tokaj in the north-east of the country. It was this Tokaji Aszu that was sought out by the French and Russian Courts and the Hapsburgs, and it was the region of Tokaj that was deemed valuable enough to merit one of the world’s first vineyard classification system, introduced in the 1700s. Recently, the stern defence of the name Tokaj has propelled Hungary into legal cases against a variety of countries including France, Slovenia, Italy and Slovakia.

Though commercial wines are still made, there is now more innovation coupled with rediscovery – attempts to define the Hungarian version of “international” grape varieties, and to recreate and rehabilitate indigenous grapes.

More recently, with vine-growing and winemaking homogenised under communism, Hungary’s diverse range of grapes was sacrificed in the pursuit of high yields and mundane reliability. Soviet-era farming practices mechanised agriculture in order to make it more productive (read industrial). Thus, vineyards which were more difficult to farm – but on better terroir and steeper slopes – were abandoned in favour of plantings that were on the flatter areas. Driving down the quality of grapes led to a commensurate increase in chemical intervention.

Hungary became known for its “Bull’s Blood,” now called Bikavér. Thus mediocrity prevailed for a period of time. Though these commercial wines are still made, there is now more innovation coupled with rediscovery – attempts to define the Hungarian version of “international” grape varieties, and to recreate and rehabilitate indigenous grapes. 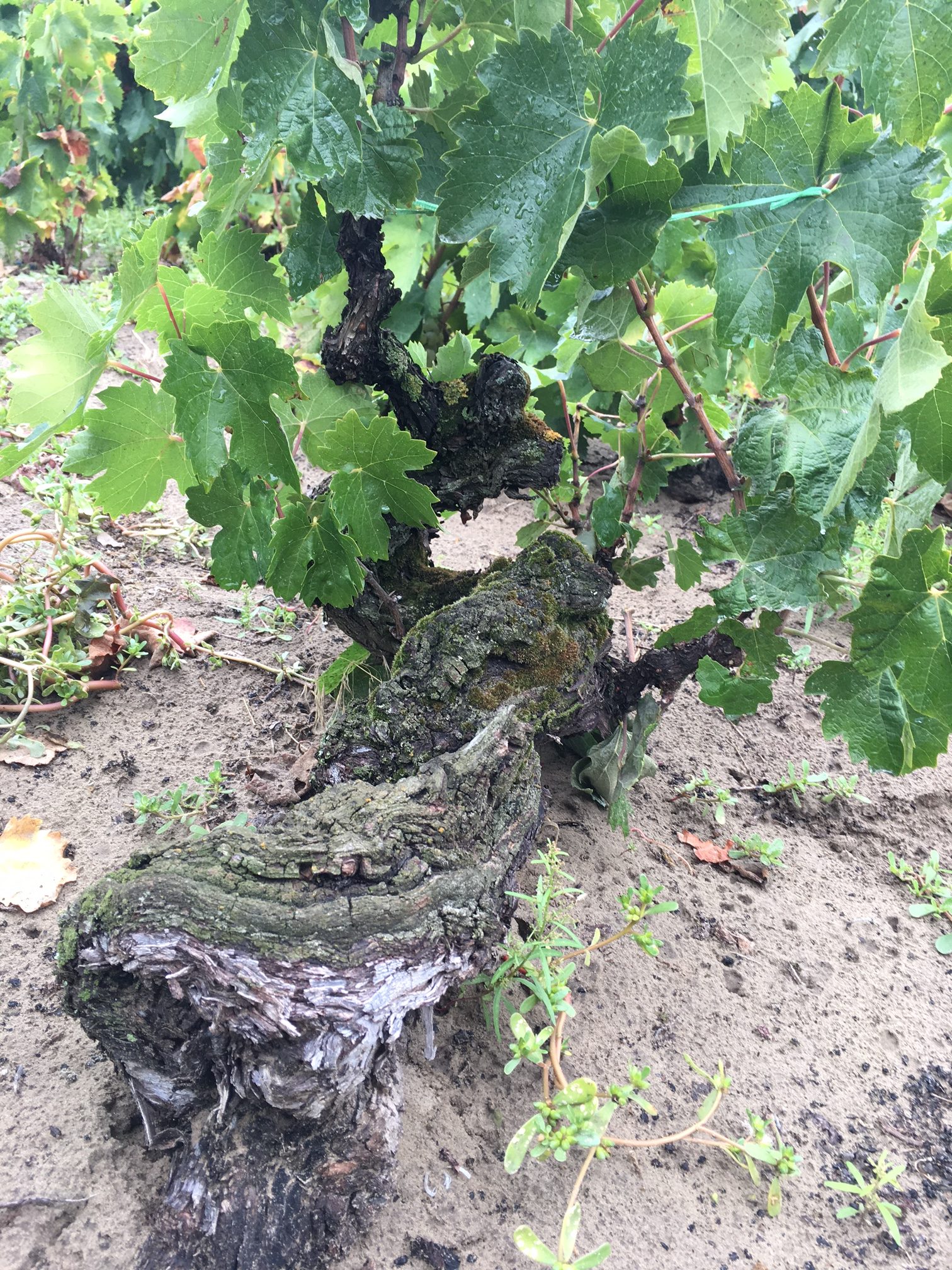 The modern Hungarian wine regions are distributed around the country. Sopron, in the north-west on the Austrian border, is separated from Tokaj, in the north-east, by 230 miles (370km) and from Hajos-Baja in the south by about two-thirds of that distance. Between these key areas lie the country’s 22 official wine regions, each of which have their own particular blend of culture, history, terroir and wine style. The quantity-driven vineyards of the southern plains, for example, are quite distinct from the lakeside vineyards of the west and the foothills of the north-east.

Our first visit was the tiny artisan winery of Kárner Gabor in Szúcsi, Matra, Gabor farms (organically) a mere 2.3 ha and produces a piffling 4,000 bottles per year. The region is interesting: Mátra (Slovak: Matra) is part of the north Hungarian mountains and belongs by origin to the largest young volcanic zone of Europe. It is situated between the valleys carved by the rivers Tarna and Zagyva. The Mátra can be divided into several readily distinguishable parts. The highest point of the Western Mátra is Muzsla (805 m). The Central Mátra consists of the plateau of Mátrabérc (Mátra ridge) and the groups of the volcanic cones of Galyatet? and Kékestet?.

Gabor was/and is a drummer in a band and he has certainly nailed the beat in his two wines – one of which is an excellent Olasz Riesling (elsewhere known as Welschriesling). There are two components vinified separately, one without skin contact exhibiting real verve and nerve and one that is naturally more textural, peachy and spicy (but which also retains its balance). Whilst either component would make an impressive wine in itself, often they have to be blended so minuscule are the quantities. The Kekfrankos (Blaufrankisch) was a solid citizen; the cooler of the vintages we tried showed great red fruit intensity with fine tannins and acidity. This is a grower with his heart in the right place.

Tokaj is a historical wine region located in north eastern Hungary and south eastern Slovakia. It is also one of the seven larger wine regions of Hungary (Hungarian: Tokaji borrégió). Hegyalja means “foothills” in Hungarian, and this was the original name of the region.

The region consists of 28 named villages and 11,149 hectares of classified vineyards, of which an estimated 5,500 are currently planted. Tokaj was declared a World Heritage Site in 2002 under the name Tokaj Wine Region Historic Cultural Landscape. However, its fame long predated this distinction because it is the origin of Tokaji aszú wine, the world’s oldest botrytized wine.

The Tokaj terroir consists of clay or loess soil on volcanic subsoil. The microclimate is determined by the sunny, south-facing slopes and the proximity of the Tisza and Bodrog rivers, and is conducive to the proliferation of botrytis (noble rot) and the subsequent desiccation of the grapes. By the way you know you’re in Hungary when the word aszu starts tripping off your tongue.

Furmint and Hárslevelü have been cultivated in the region for centuries and, together with Yellow Muscat (Hungarian: Sárgamuskotály), Kabar, Kövérsz?l? and Zéta, are the only grape varieties officially permitted for use in the region.

A vast system of cellars was carved out of solid rock between 1400 and 1600 AD. They provide a constant temperature of around 10-12 °C. The cellars are covered in a characteristic black mould, which feeds off the alcohol evaporated during ageing and keeps the humidity in the range of 85-90%, which is ideal for the aging of Tokaji wines. Noble rot meet noble mould!

The appellation system is historic: A royal decree in 1757 established a closed production district in Tokaj, the world’s second system of wine appellation. Vineyard classification began in 1730 and was completed by the national censuses of 1765 and 1772.

It is an area that has experienced a great deal of investment and is undergoing a renaissance and is justifiably protective of its name.

Located in the village of Tarcal, the modern Királyudvar estate was built upon original wine press house dating back to the late 16th century, subsequently restored in 1999. The original “Királyudvar” (“King’s Court”), built by Antal Grassalkovich, was the centre of the royal estate. Királyudvar was given a new injection of life in 1997 by American businessman, Anthony Hwang. The idea for the investment came up while he was sitting with István Szepsy and tasting his fabulous 1993 6 puttonyos Aszú. Szepsy became co-founder and first winemaker of Királyudvar. Today, Királyudvar cultivates 45 hectares divided among six primary vineyards – Lapis, Henye, Percze, Becsek, Danczka and Nyulászó.

With time, Szepsy departed, and Anthony assumed full control. Along the way, he was advised by Noël Pinguet from Vouvray producer, Domaine Huët. Noël’s collaboration would prove invaluable, particularly his advice to convert the estate to biodynamic viticulture. 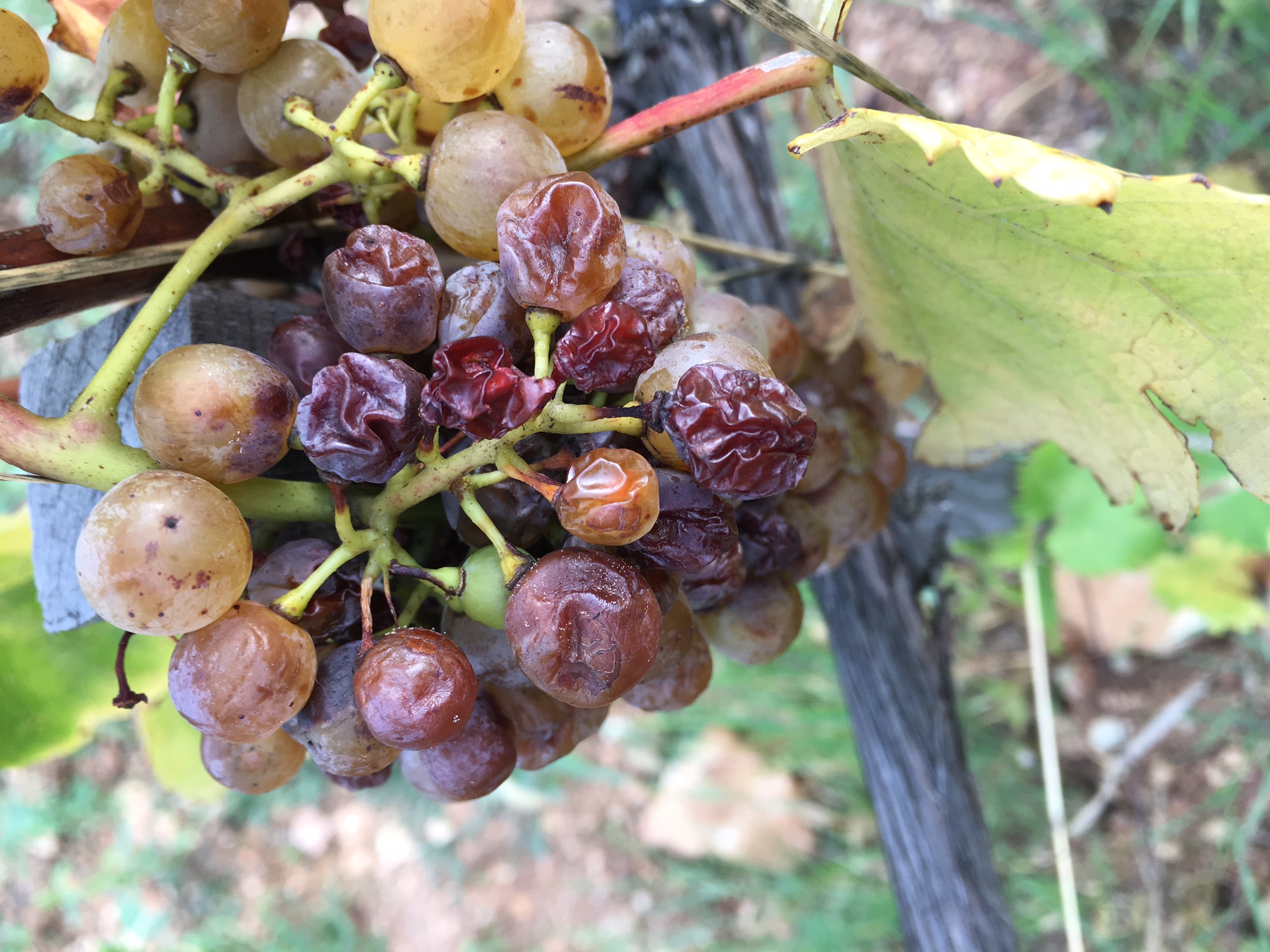 Today, Anthony is rekindling the legacy of this providential wine region. But he’s not stopping there, having recognized, that Tokaj’s historic grape varieties, with their viscous intensity and bright acidity, could produce an entire range of world-class dry, demi-sec, and sparkling wines and, of course, the whole gamut of sweeties.

The Királyudvar wines were stunning, the result of setting the quality bar very high, examining and re-examining every detail of production from farming to winemaking. I enjoyed the precise Furmint which displayed an almost Chablis-esque chalkiness and the tension of white wine still in its relatively infancy. The sweet wines showed an excellent balance of acidity to offset their honeyed fruit.

Next day, saw us bowling south towards Serbia, where a large part of the Hungarian diaspora lives. There we met Oszkar Maurer. Oszkar’s estate vineyard is near the Ludasi Lake area near the Hungarian border, while the other area of vines that he tends is in the famous historic region of Szerémség. These vineyards include variously old local varieties like Mézes Fehér, Bakator, Szerémi Zöld, and a hundred-and-thirty-year-old plantation of Kadarka.

The traditional single stake vineyard management is used for the new plantations as well. Most plots are worked by horse, some by tractor. The average age of the old vineyards growing is 60 years. It was Ozszkar’s dream to revive the famous wine region of Szerémi, and to do this by replanting the original indigenous varieties, which are important not only because they are autochthonous, but also because they provide the possibility of creating unique and authentic wines as long as the farming is sympathetic and traditional winemaking practices are used.

The key to the Szerémség region are the Tarcal (Fruska Gora) mountains, a nearly 500 million year old formation composed of volcanic and sedimentary rocks. The Danube flows nearly 70 km along the foot of the mountains, with the Riesling vines, at one point, a mere 50 metres away from the banks of the river, and whose proximity creates many unique little microclimates. The vineyards are farmed organically and, in the same spirit, fermentations are spontaneous and without the use of any additives. Sulphur levels are relatively low by Hungarian standards. The reds are bottled without filtration. 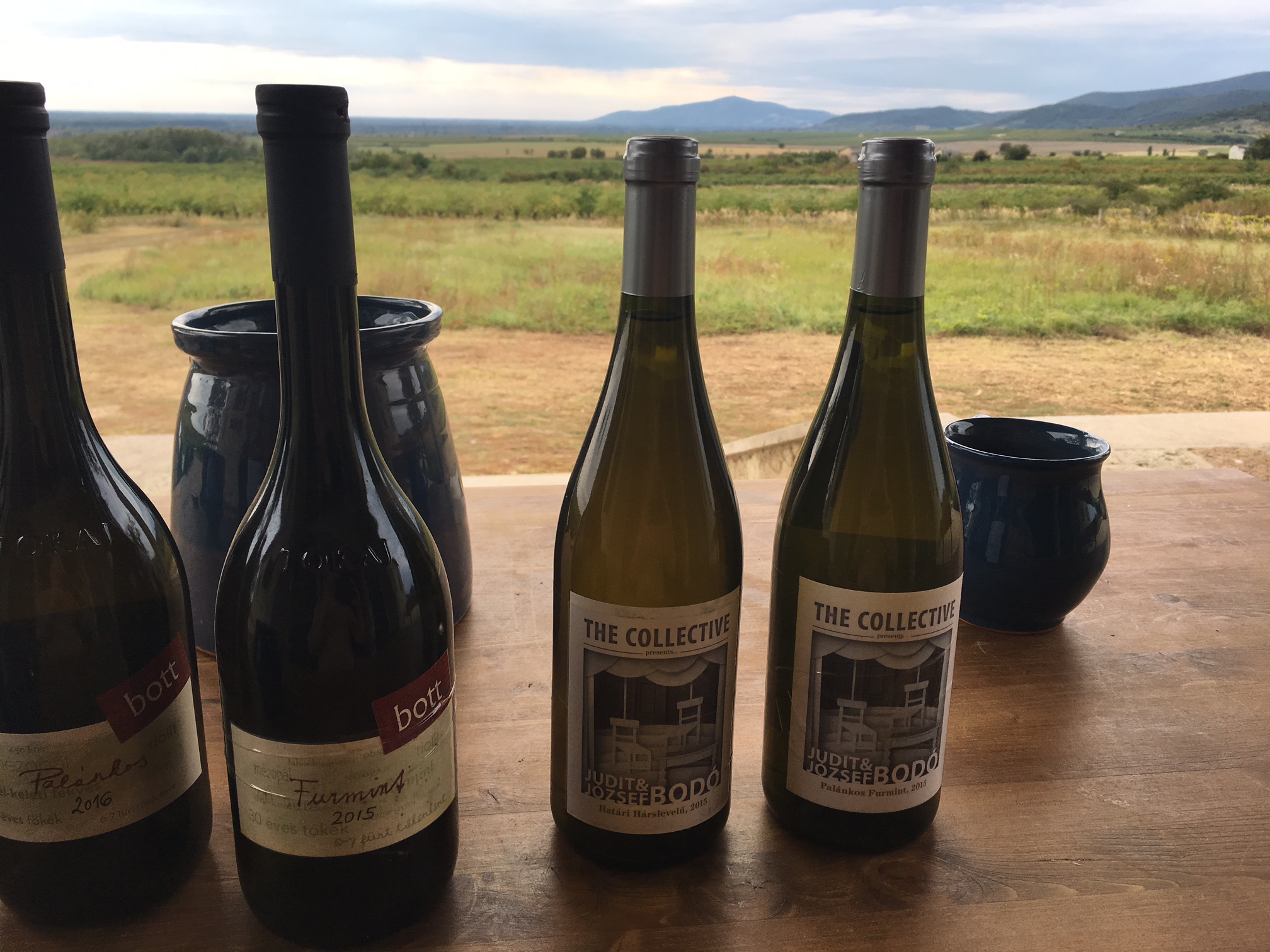 The grapes and wine in Szerémség (Srem-Syrmia) have been produced over the period of around 3000 years by the Celtic Scorbiscus tribe, the Romans, the Huns, the Avars, the Hungarians, and after the expulsion of the Turks around 1750, the grape-and-wine production on the Tarcal was revived by Austrian and Bavarian producers. Today this natural environment with an outstandingly rich ecosystem, belongs mostly to Serbia, with some of it on the Croatian side of the border.,

Oszkar is definitely on an interesting journey and makes a wide range of wines in different styles. I preferred the more avant-garde styles such as the Bakatorange (skin contact natch!), Kevedinka 1925, and Mézes fehér. 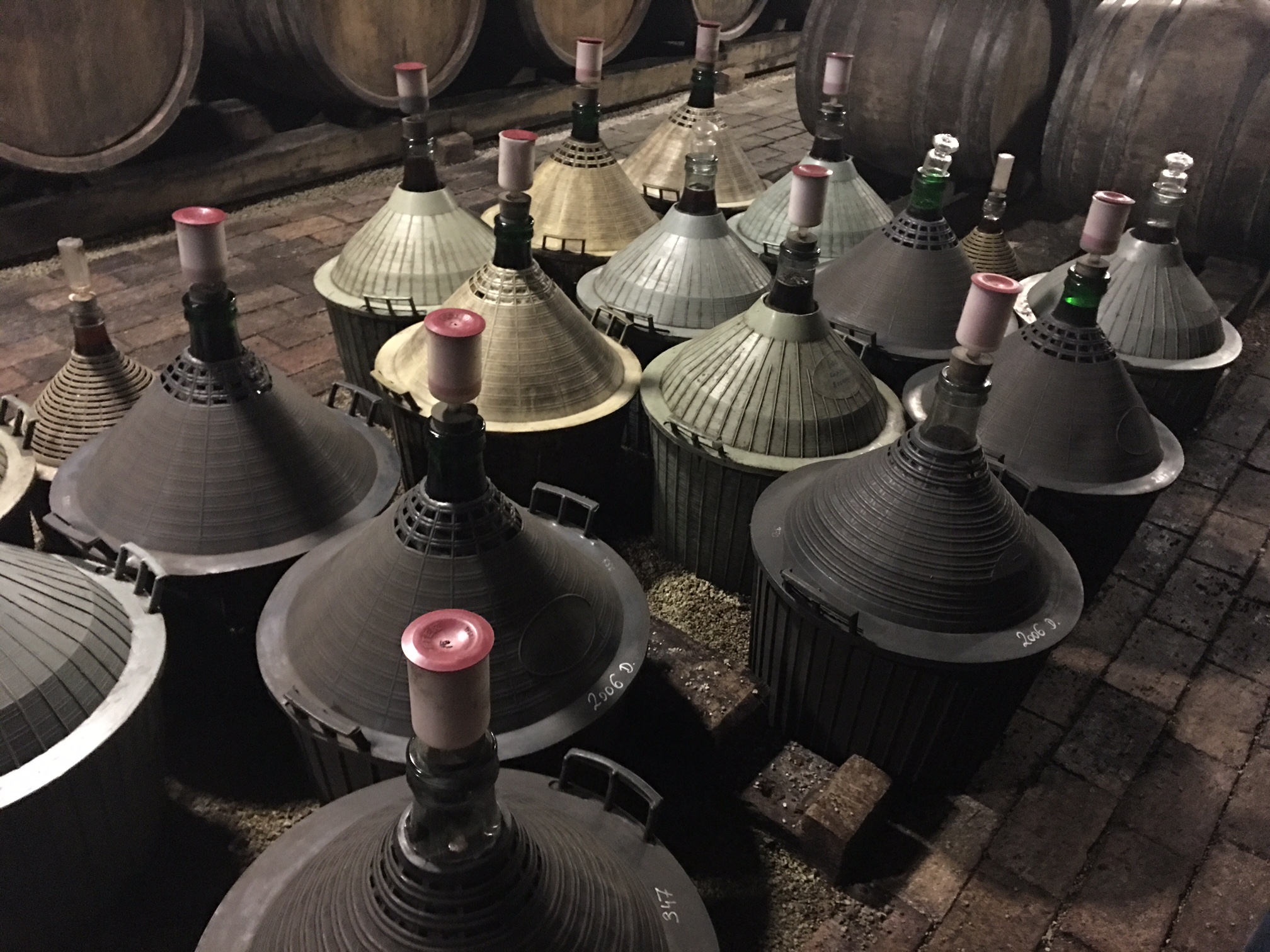 Hungary has natural advantages – diversity of terroir, an historical wine culture, many different grape varieties and a propitious climate. It suffers, however, perhaps, from its immediate past with a reliance on easy chemical options, a dearth of standard bearers of quality in regions outside of Tokay and a lack of a curious, well-informed wine culture. Cultural integrity is not about defending recent questionable practice, but examining at the best traditions, filtering them through a modern consciousness to create a “new authenticity”. These wines will more often than not, will be delicious and drinkable and find a much wider audience in the end, then the prevailing wines by rote. But there were enough promising signs to be able to forecast an interesting decade ahead for artisan Hungarian wine.

My incredibly knowledgeable and kind guide and taxi service in Hungary was András Kato who is instrumental in bringing together artisan vignerons, supporting them and challenging to have the courage of their convictions (and his convictions).