The Official Launch of the English version of Michel Tolmer’s book, Mimi, Fifi & Glouglou, translated by our Sir Wregg!

Who are Mimi, Fifi and Glouglou? Three differently sized-and-shaped chaps, brimming with bonhomie, joie de vivre and je ne sais quoi as well as a sociopathic nerdishness that makes them drink wine, think wine, talk wine and dream wine. They are the three musketeers and occasional superheroes of wineupmanship; if a little learning is a dangerous thing then they have a lot of little learning. Tasting is their metier, and blind tasting their delicious boot-camp. For all that they pretend to use the finely-calibrated senses and the pelagic profundity of their knowledge, second-guessing is all part of the armoury, as is sneaking a prior peek at the bottle. Although they are deadly serious at times, they are also les wind-up merchants par excellence – and it is far, far better that someone else fails in their attempts to discover the wine than that you succeed in the same endeavour. Occasionally pretentious themselves, they loathe pretention in others, and no matter how busy they are, and how literally drowning in an ocean of work, there is always time for a three-hour lunch with another bottle of Chiroubles before the attack of poire Cazottes. 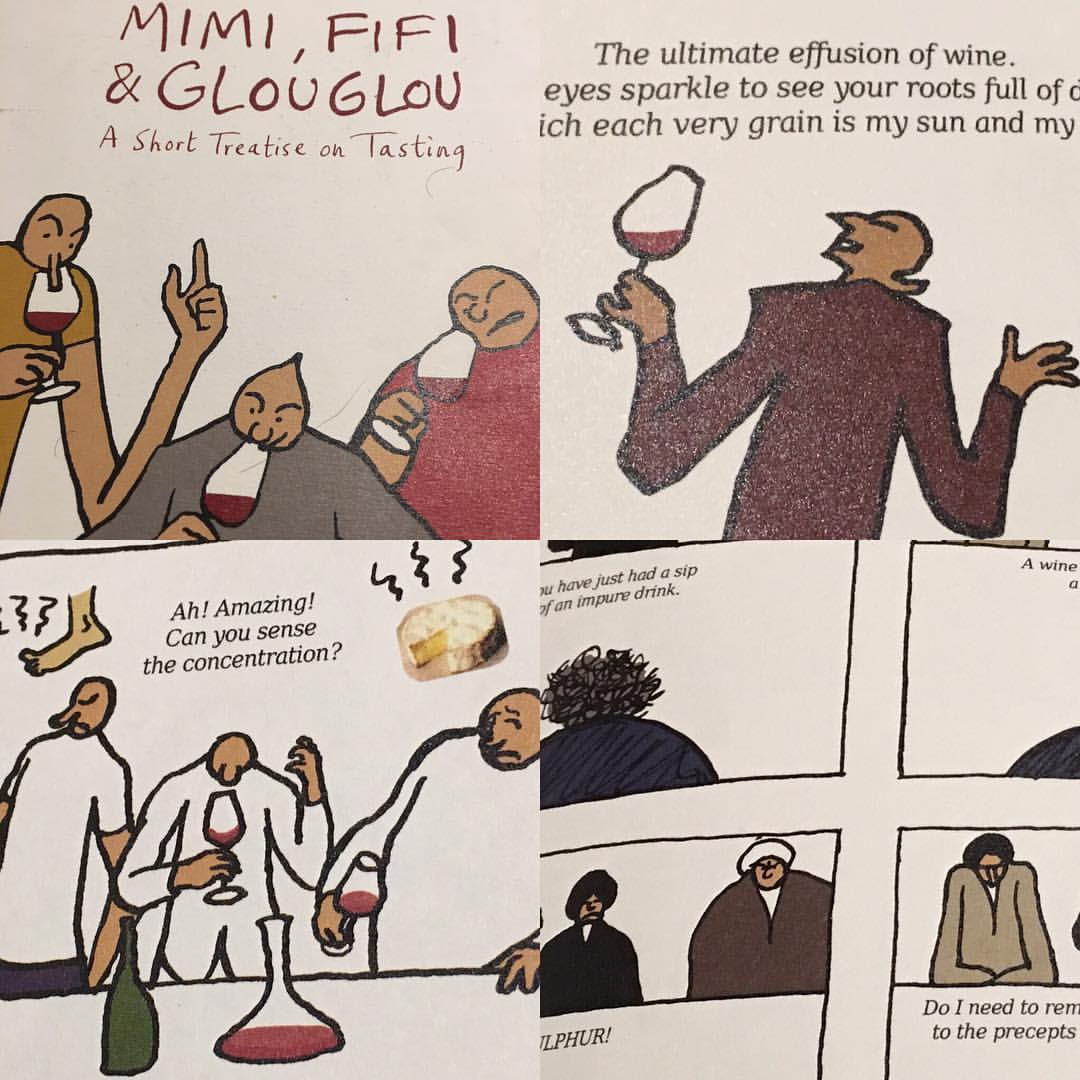 Michel Tolmer is the author, illustrator and puppeteer of our three heroes, casting them forth on their vinous peregrinations. And although Mimi, Fifi largely revolves around the Paris natural wine scene, that demi-monde of wine bars and tastings, it also touches on wider themes, portraying a largely male world, where hobbies becomes professional obsessions. In this world, knowing/unveiling the identity of the wine is akin to a sexual conquest; conversely and perversely, there is extreme stickling for the rules and rituals of engagement. Just as the wines are pure, so it is with the purity of the quest. For the authentic wine lover in search of the wine grail, the wine must not only be the wine, it must also be the precise vintage.

For all the humour, there is also deep affection. The spirit of copinage prevails. Human vanity being what it is, wine reveals who we are in our cups, but it also serves to bind us together.

Michel will be talking about his creations, the natural wine scene and the art (and artlessness) of the degustation aveugle. (Who knows – there might even be a blind tasting in the masterclass!)

Doug Wregg, co-organiser of the Real Wine Fair and Sales & Marketing Director of Les Caves de Pyrene was the English translator for Tolmer’s Mimi, Fifi and Glouglou book and will be hosting the seminar.

English copies of Mimi, Fifi and Glouglou will be available to purchase at the Real Wine Fair Shop and Michel Tolmer will be signing copies.

Register in advance so you don’t miss out!