We arrived at Sepp and Maria Muster’s beautiful house in Leutschach, southern Styria in the early evening with the weather just beginning to turn. 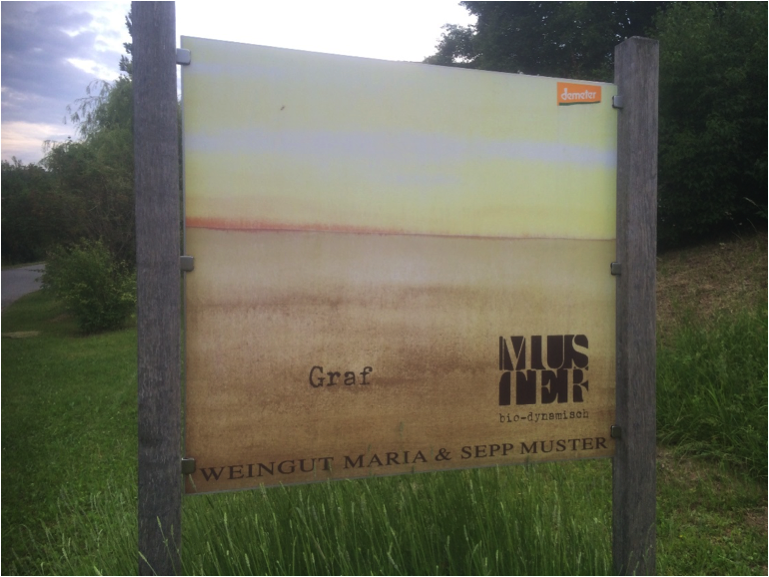 The vineyards were in fine fettle. Daisy-carpeted, clover-sweet grass was shooting up between the rows. Sepp modestly introduced himself and the vines. Here was another living vineyard. Sepp does not adhere to systemic biodynamic solutions but observes what the vines needs and acts accordingly. 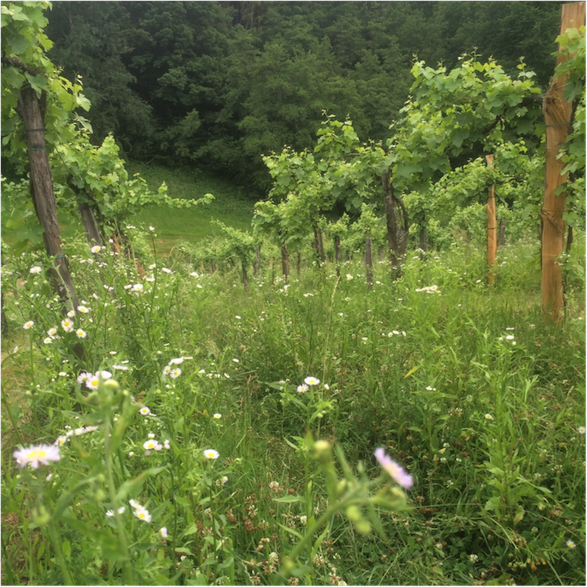 As we stroll along the road bisecting his vineyards Sepp points out the local topography. The landscape is very undulating with vines peeling off steeply in all directions from the top of the slopes. Copses, dotted at the bottom of the slopes, create myriad micro-climates for the vines that seem to be at the confluence of several weather systems.

The vineyards themselves, at a typical altitude of 450-470 m, are notably rocky with clay and silt soils dominating their steep, hand-worked slopes. The character of the wines stems from this unique location, situated in this “illyric” microclimate with the influence of the Koralpe (the nearby high mountain plateau region), with its cool nights and winds being mainly responsible for the character of the wines.

The vines grow on lime soil, composed of solid clay silt, known here as “Opok” which results in warm “dense” wines with intense varietal aroma character. The vines look wild and primitive with their single wire trellising, a reflection of the original method of vine training developed by Sepp’s ancestors’ they rise high along chestnut wood posts and branch out at approximately 1.80 metres height. The one-year canes hang down from the wire as if bending towards the earth. This practice was developed to promote a harvest of physiologically-ripe grapes, the idea being that the energy of the vines goes not into creating a canopy of leaves but into the very substance of the grapes themselves. 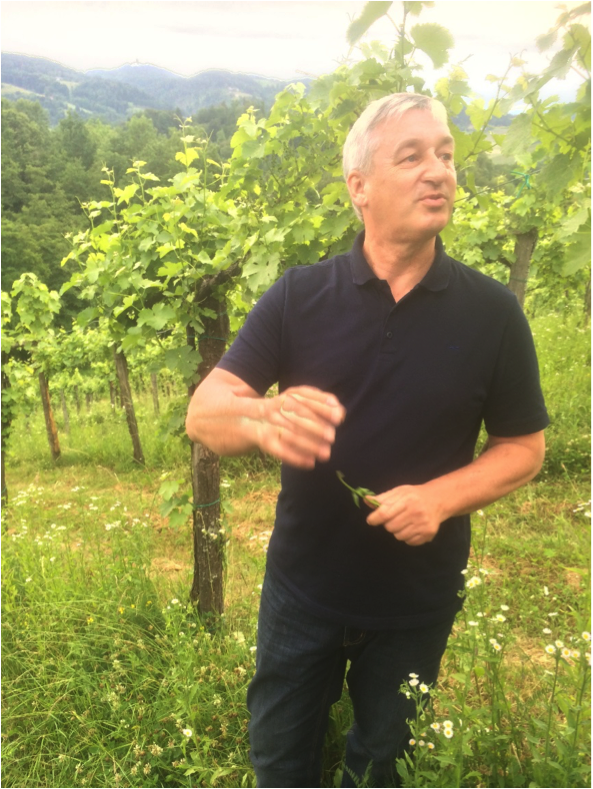 Sepp echoes the simple mantra that we have heard so far that he does not wish to fashion his wines to any specific style, but rather allow them time and space to reach their own individual potential, referenced through terroir, soil character and vintage. It’s the classic hands-on, hands-off approach, emphasising awareness of tradition and the need for observation, seeking healthy vines to yield healthy grapes, and then allowing the wine to make itself in the cellar with the minimum of fuss. As he says with a smile when we enter the barrel room: “I don’t come in here very often.”

The chief preoccupation, as with Franz, Andreas & Ewald, is to build soil and vine vitality by using biodynamic practices.  For Sepp this involves the dynamising and spreading of plant, mineral and animal substances and working according the Maria Thun calendar. Cluster thinning is partly naturally generated, partly done by hand, the goal to produce small berries, highly aromatic grape material as the basis for full character and complex wines.

The wines represent the overall character of their immediate surroundings. This involves the singularity of the vines, soil, microclimate, people and vineyard location as well as the specific vintage and results in individual, fine and multiple-layered (complex) wines, which over the years, alter in their aromatic structure.

The cellaring process is where nature meets time. Spontaneous fermentation (with natural wild yeasts) in large format barrels, no temperature control, naturally occurring malolactic fermentation, nothing added, nothing taken away.  The wine is aged (up to two years) to obtain the optimal maturity and harmony of the various flavours.

Sepp makes wines in different styles, but they share the same natural spirit. Vom Opok wines are from hand-harvested grapes grown on clay/silt soils towards the bottom of the steep slopes. The wines themselves are fruity with soft mineral character and lively acidic fruit. Sauvignon, Morillon, Welschriesling, Zweigelt, Gelbermuskateller, a white and a red blend and even a Schilcher provide a fantastic and fairly priced introduction to the wines from this region.

The Graf wines are from carefully selected handpicked grapes from south-facing slopes with specific soils (i.e. “Opok”) and naturally small grape cluster. These wines differ from those of Vom Opok vineyards having a fuller structure, more extract/density and pronounced mineral character. The influence of the Koralpe doesn´t play as much an influence in the grape aroma in that they are more protected from it than the Sgaminegg vineyard. These wines are bottled after 22 months in the cellar.

Sgaminegg comes from the best vineyard of the estate with pure Opok soil, the sparsely-foliaged vines yielding tiny grape clusters (15-20 hl/ha). The winds from the Koralpe play their influence here directly. Sauvignon and Morillon are matured in wooden barrels, blended and bottled after 22 months. The wine has a cool, austere feel as if the very limestone rocks had fermented slowly with the grape juice and released their stony essence into the wine.

Finally, Sepp makes two orange wines where the juice is fermented with the skins – and partly with the stems. These skins and stems contain colour pigments, tannins and phenols, which impart the “orange” colour. This can vary according to variety and year from a rich yellow, also pink, to a vibrant orange. The texture is concise, compact, rich in tannin, aromatic and complex.

Only the smallest tightest-skinned berries are harvested. The “Gräfin” (Sauvignon Blanc) ferments 2-4 weeks on skins, whereas, “Erde” (Sauvignon Blanc, Morillon) remains between 6-12 months with skin contact. The wines are, of course, spontaneously fermented. They are not sulphured and mature in wooden barrels for at least 20 to 24 month and bottled without filtration or fining. The Grafin is more floral and fruity, the Countess with a feminine mien, where the Erde is more intense, spicy and earthy – again, befitting its name. The wine is housed in rather quirky clay bottles – a homage to Georgia, perhaps, where the wine returns to its clay roots.

Sepp is a most thoughtful vigneron –he takes time to make time as the French would say. The slow wines are wholesome and complex. The labels describe the contents of the bottle perfectly. They are like Rothko paintings with an upper layer of colour pushing down into the lower one. The upper layer comprises a line of orange melting into yellow-gold and finally into a thin strip of green then a line whilst a rich loamy brown shade dominates the bottom 3/5s (or so) of the label. The significance is clear – the upper layers represent the power of the sun and light energy, the green strip is the canopy and the lush vineyard vegetation, whilst the brown indicates the earth and its minerals that power the vines from below. The proportions are interesting – Sepp’s wines are definitely earth wines (be they Erde or Opok), even when they are light (as in the 2014 vintage) they feel “rooted”. 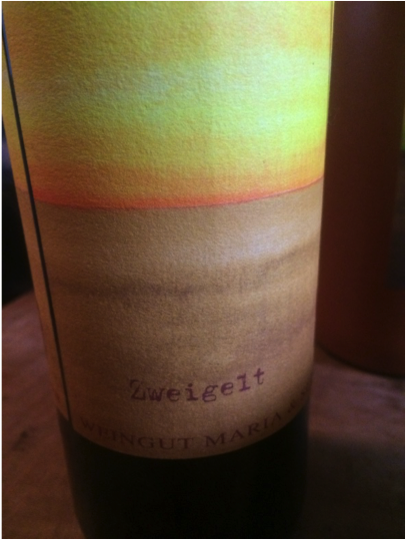 This part of Styria and in particular the small group of growers who belong to Schmeck das Leben seems like a remote village in the world of wine. There is a wine culture, but it is humble to point of being self-effacing. The growers are not heroes in their own region and their practices are considered unorthodox and even damaging. They are not crazed ideologues – though certified by Demeter, Austria, they have little interest in the cachet or the paperwork. They work in the way because it is right for the environment, right for the wine, right for them. There is no commercial imperative. 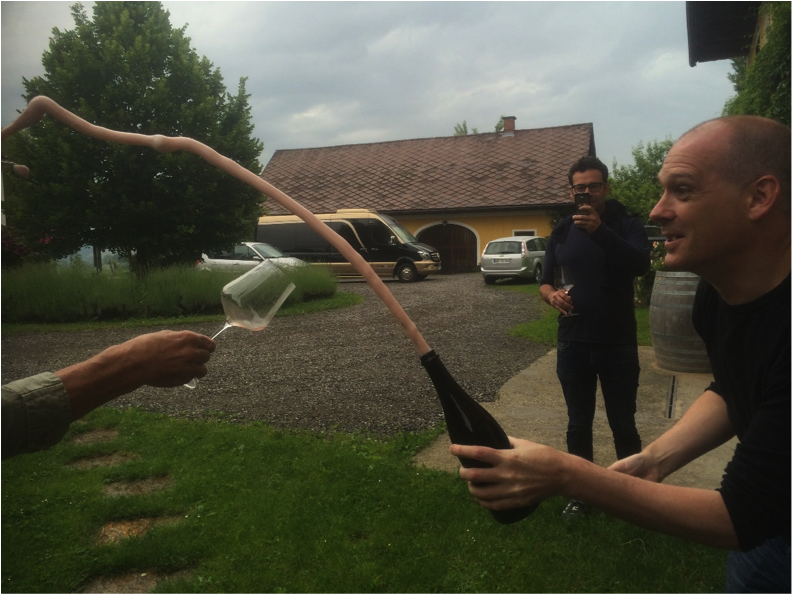 Candyfloss ropes disgorged by an expert in the field 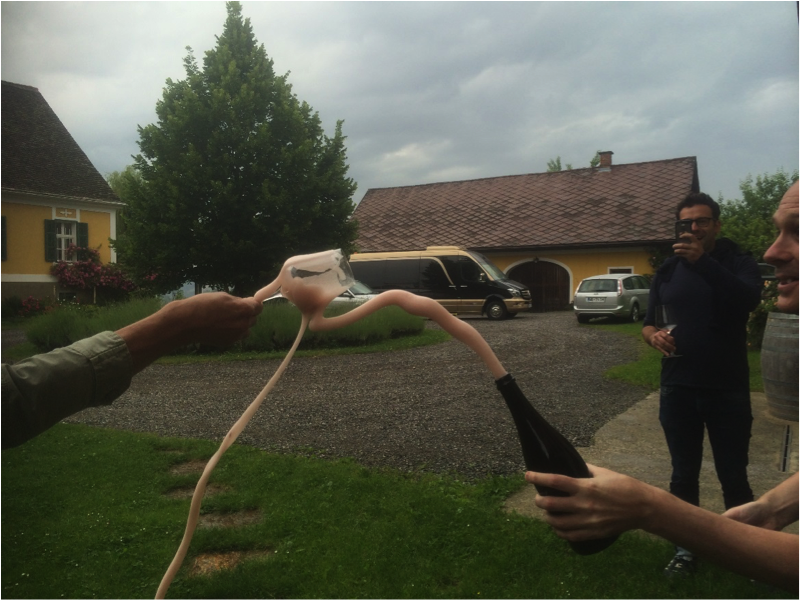 They all believe that wine is one element in the whole. You often hear the word happiness and personal fulfilment when you are talking to these guys. This is the human component of biodynamics based around the notion that one is healed by one’s interactions with nature and the land. Yes, Nature does have a capital N.

Biodynamics means biodiversity and trying not to damage natural organisms from the birds to the bees to the tiniest cell life. A functioning vineyard must live on every level. The vignerons pay particular regard to the soils and avoid using tractors or cutting the grass aggressively, minimise copper and sulphur treatments to the bare minimum and use teas and biodynamic sprays to activate and salve.

The vines are straggly. Bunches are uneven, grapes will rot and be discarded. The training systems are peculiar to the vineyard, the region and the grower – more concerned that the energy of the vine goes into the flavour of the grapes. 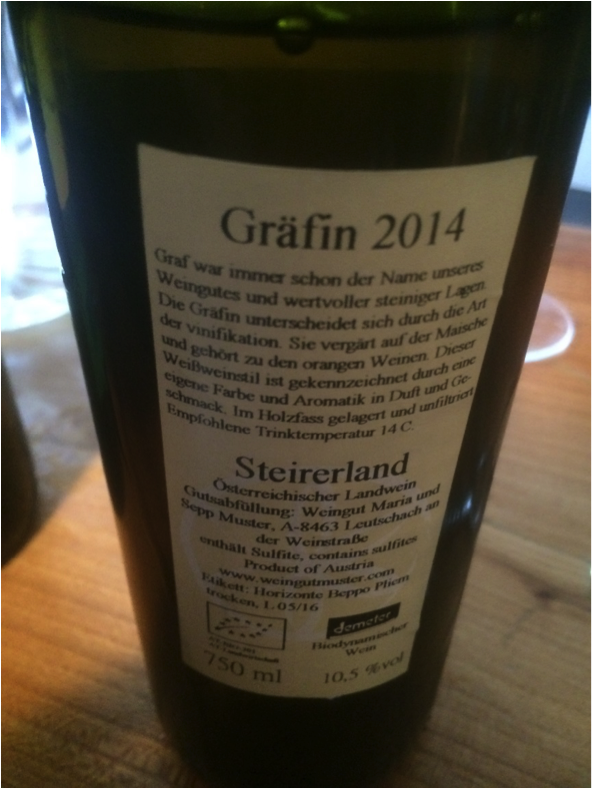 Terroir is important, expressed through intensity of flavour rather than primary aromatics. The solidity of the wines is built on pillars of texture and tannin rather than acid and alcohol. The ageing in wood relaxes the juice but confers a certain architecture. The wines aren’t noticeably woody, but they have a wood influence, in the way that any ageing vessel will help to shape the final wine. The tannins seem to emanate from the grape juice itself. Sauvignon is the glory of the region and the grown-up way that it is handled yields a mixture of spiciness and mouth-weight. Many of the wines had distinctive herbal inflections (wild mint). The key here is to thin out the leaves during the ripening period, harvest late, allow malolactic and long ageing in barrels.

The final piece in the puzzle is that they have all relinquished sulphur as a preservative. Here, to coin a phrase, one can literally taste the difference. Each of the vignerons show us examples of wines made with minimal additions – they are good, sturdy, irreproachable wines. We then taste the same wines (although from different vintages) without sulphur. The wines taste liberated and expressive as if the merest dose of SO2 had throttled back on the fruit and terroir. Wine is a subtle, living organism – such a simple comparative exercise illustrates how it breathes, how it behaves. We always sampled in massive Burgundy balloons; on several occasions we were allowed to try wines that had been opened 2, 3, 4 weeks and even longer. You notice that the oxidation is barely perceptible, the colour has not changed, the freshness is enhanced rather than dulled. It goes against the grain of wine knowledge, but so much of we have seen and tasted speaks volumes in its own idiom. As the growers might say it is instructive to accompany the wine on its journey and “to take time to make one’s soul happy”.

This perspective is refreshing as it gives a deeper meaning to being a vintner. Growing wine is (I like that expression) about helping to be part of a process that gives rise to unique sensations and feelings (both in the grower and the drinker). It is not about creating a product directed towards an audience of critics and consumers. It is accepting what nature bequeaths, it is about respectfulness, sensitivity, integrity and generosity. This is more than a political pocket of natural resistance or polemical approach to biodynamic, it is group of people farming in the right spirit, doing what makes them happy, the result of which turns out some pretty stunning wines!

Read Parts 1 and 2 of the Pyrenees’ Austrian adventures here:

The Cavistes’ Wines of the Year