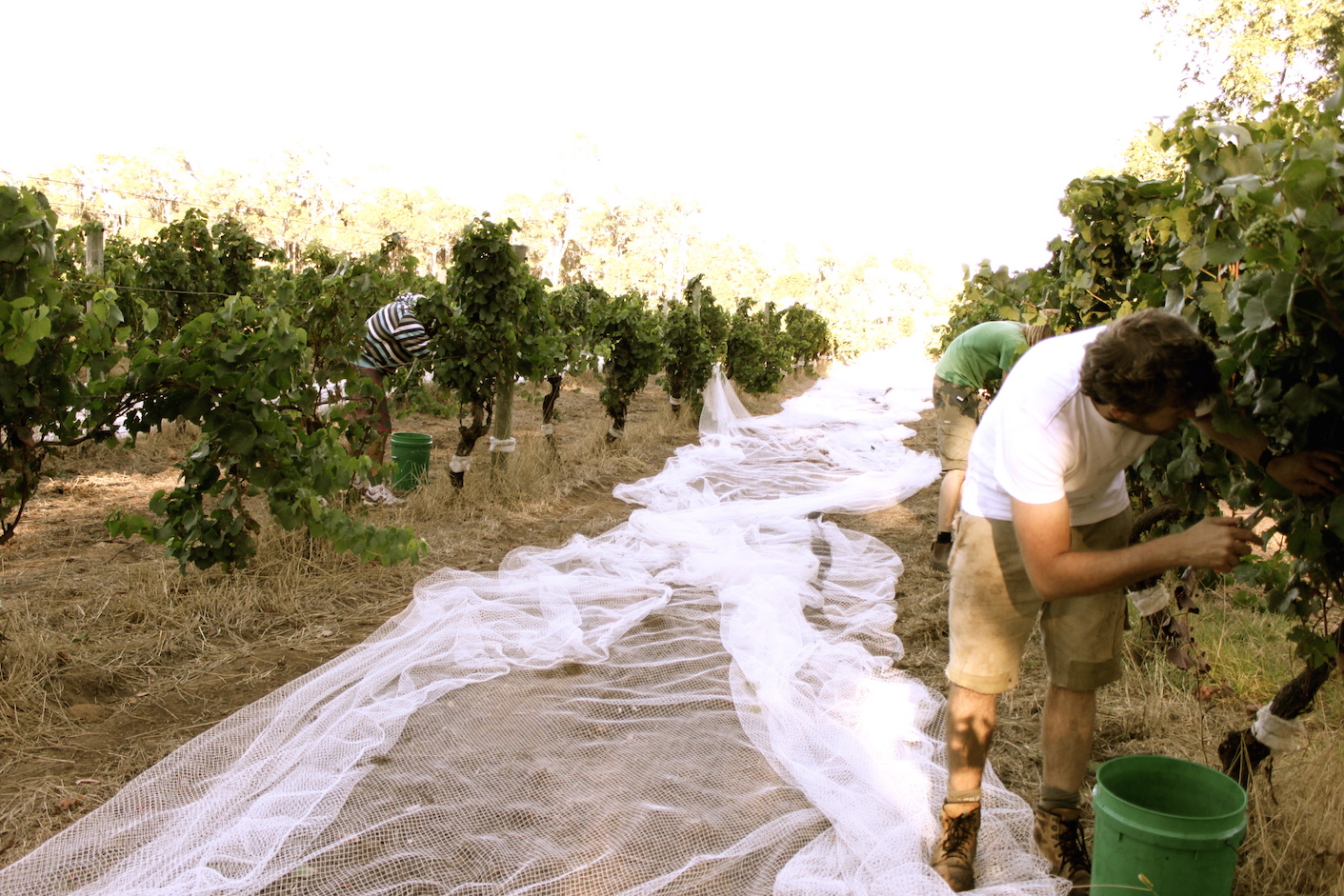 Hand harvested (which is selected by eye) implying an artisan, discriminating activity, based on selection and quality.

Hand (of the winemaker) – intrusive presence of an oenologist in the final product wherein the wine tastes more of the tropes and techniques of a human agent than the place of origin. At its clumsiest might be characterised as “the wooden fist in the iron glove”.

Hand sell – denoting an obscure or quirky wine that may only be sold by sommeliers to their customers by careful prompting (with a loaded gun).

Hang fire! – What an Aussie winemaker (or one from Etna), for example, will exclaim when his or her wine is afflicted by smoke taint as the result of a forest conflagration.

Hang time – Leaving the grapes on the vine till they attain either phenolic maturity or gross over-ripeness. 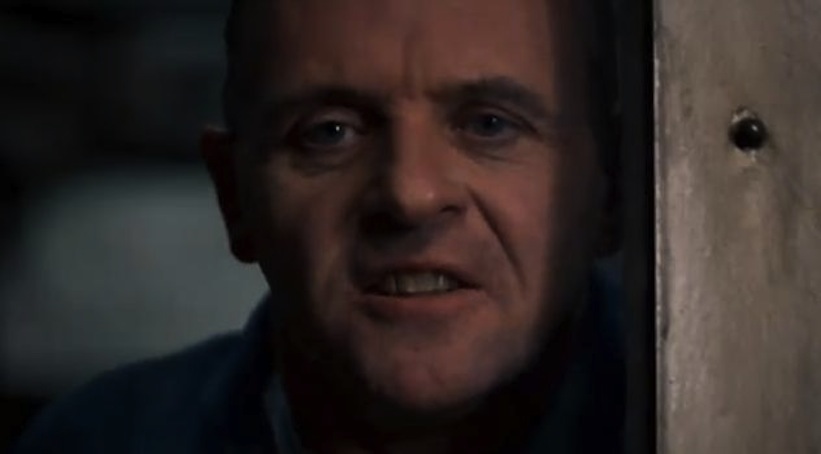 – Cannibalism aside, it was Barolo, not Chianti, mon hyprocite Lecteur.

Hard – Lacking in fruit and tough in tannin. Any wine we don’t like is also hard, if not impossible, to drink.

Head Space – Ullage. Also the pitiless concentration of a professional taster who hangs a “Do Not Disturb” notice around their neck to denote fanatical concentration whilst assaying wines at a tasting (or updating their Facebook/Twitter status).

Hecklers – more ether-nutty mutton-dressed-as-lamb perorations from some bombinating cockalorum (to coin a phrase), some spleeny plume-plucked pumpion, the usual tiresomely vitriolic, wilfully misrepresentative intellectual blancmange that is the parole of so many of today’s bloggers. Without thoughtful debate there can be no rapprochement, without intelligent questions no considered answers – in the dark cave of certain bloggers there are only the fuzzy echoes of their own prejudices. Natural wine über-sceptics have become the arch-evangelists of the wine world, akin to those right wing fundamentalists who send threatening letters to scientists who investigate the phenomenon of climate change. Contumely has never been a substitute for thoughtfulness. They may represent themselves as the last-bastion rationalists in the world of the voodoo winemaker and his blindly worshipping acolytes and have arrogated to themselves the role of witchfinder generals, but, by personalising the arguments, ignoring the real views (and deeds) of those winemakers, the consumers who drink the wine and their more open-minded brethren who write positively about the wines, they have ended up as the canting hate preachers of the wine world.  It is easy enough to provoke them and perhaps one oughtn’t tease people, but if you dare to juxtapose the words real, natural and wine, a black hole of Pavlovian indignation is instantly generated in the blogosphere sucking in all the usual suspects and sucking out all the oxygen.

Heliogabalus – a sybaritic Roman emperor, who, legend has it, suffocated to death under a cascade of rose petals. Drowning yourself in a barrel of Le Pin might be the modern equivalent, although there might not be sufficient wine to achieve this aim. If not, drowning in the sheer treacle of the over-ratedness of such wines is an alternative option.

-And may at last my weary age Find out the peaceful hermitage, The hairy gown and mossy cell, Where I may sit and rightly spell Of every star that heaven doth shew, And every herb that sips the dew, Till old experience to attain To something like prophetic strain. ––John Milton, c.1631 Il Penseroso

If you have nearly drunk a wine from a great vintage from the leading grower in this celebrated northern Rhone appellation then you have had a close Chave.

History – wine is more than the result of a single year’s labour in the vineyard, it bears the imprint of the particular weather conditions, the geography, the soil, the people and the culture for hundreds of years. Wine has the capacity to take us to other places and other times, if we will only let our imaginations run free. Vintages have a special personal relevance; how much more attention do we pay when we drink from our birth year?

History is generated every vintage when the lexicon or superlatives is ransacked to place the year at the pinnacle of hierarchical outcomes. Thus history becomes hype-story.

Homer – Garçon! A bottle of your second cheapest champagne! And other classical observations. 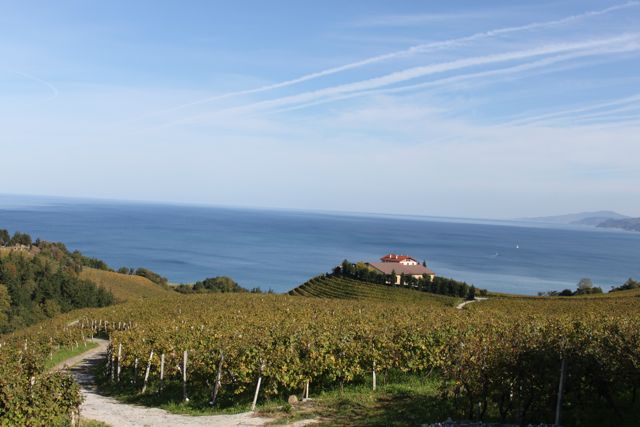 – Indigenous to the Basque region (in particular Getaria and Guipuzcoa in the north of Spain near San Sebastian) Hondarrabi Zuri is a light-skinned berry, while its darker brother the Hondarrabi Beltza grows in Baquio y Almaseda in Viscaya. Used to produce the Basque wine called Txacoli. Artery-hardening to pronounce and artery-cleansing to drink our Txacoli de Getaria from Bodegas Ameztoi is a classic example – a green-tinted wine with lively spritz, high acidity and crunchy apple flavours. Txacoli is typically effervescent, vivacious and aerial and is traditionally served with supreme panache from a great height into small tumblers.  It then turns chalky white, foams and eventually settles. Drink or rather quaff with extreme enthusiasm with all manner of pinxtos such as anchovies any which way, olives, escabeche of mackerel, cipirones and deep-fried vegetables. Said to be the only wine that can partner wild rabbit as it can dissolve lead shot on contact. Life without Txacoli is like a crouton without an anchovy.

Hospitality – “Fan the sinking flame of hilarity with the wing of friendship; and pass the rosy wine” as Dick Swiveller said. With all the screeds of guff written about wine one tends to forget that good wine and good company lubricates social interaction. Wine loosens the tongue, fires the blood, relaxes the mind, fuels wit, if not wisdom, spurs poetry and song…

Hype – the oxygen that nourishes the wine industry. The very nature of here-today-gone-tomorrow trends puts the hype into hype-ocrisy, since everything which is hyped as the latest greatest phenomenon is never the last word, and like the moth on a naked flame, barely has time to settle before it is burnt up.