*Part 1 1/2 of our Galician adventures. When you have supped on the lethal local aguardiente time becomes a relative notion! *

In Ribeira Sacra, that’s where the men (and women) are truly vital, because the cosecheros (those who tend and harvest the vineyards) must also be capable of what is known as viticultura heroica.

Or be nimbler than a mountain goat and loonier than a pair of loon pants. Despite the previously hinted-at nocturnal shenanigans and consequent general lack of sleep, the Pyrène gang duly made breakfast and eventually managed to pour themselves onto the bus. We left Ourense and climbed steadily, leaving a bank of fog below us so dense that it looked as if a heavenly entity was carpet-shampooing the valley floor. We then descended towards the Sil via a series of hairpins, glimpsing the blue-tinted river snaking through canyons hundreds of feet below us.

Ribeira Sacra is one of only two areas in Spain (Catalunya’s Priorat is the other) that requires the abovementioned “heroic viticulture.” The region’s steeply tiered slate bancales or terraces, have a great deal to do with why the wines of Ribeira Sacra can be so profoundly terroir-driven, intriguing, and delicious, and why this area has the potential to produce wines as great as those from anywhere in Spain. Potential being the operative word, as the purity of the final wine can be always be traduced in the winery. And often is. The landscape was shaped by the Romans who entered Ribeira Sacra as early as 24 A.D. to extract gold from the river valleys. This required prodigious engineering feats such as the diversion of the Sil River—accomplished with slave labour by digging a 1,300-foot tunnel through what is now called Montefurado (“perforated mountain”). The Romans also used slave labour to plant terraced vineyards along the Sil and Minho riverbanks. Today, Ribeira Sacra growers still have to work like slaves to prune, tend, and harvest grapes from these improbably situated vines. A few sites, including Cividade, Marcelino, and Viña A Ferreira, are so inaccessible that when the grapes are harvested, they are lowered to boats waiting on the Sil River, brought to landings that can be reached by road, and finally hauled to the wineries. All the working vineyards have makeshift rails adapted from mining, with mechanical lifts that are winched up and down, carrying one person at a time, a few tools, and, during harvest, containers of grapes. It’s the sheer epic bloody-mindedness needed to make wine at all that stays with you. The viticulture, the beauty of the river canyons, the Romanesque monasteries – these are the enduring images of the region.  “To visit this land is to contemplate a form of ancient viticulture which hasn’t changed since Roman times, filling the riverside slopes with a multitude of stairs towards heaven’”.

Our first port of call was Adega Cachin, where we were greeted by a large bounding toothsome pup. A swift pit stop to browse and sluice on locally cured sausage and chilled Ribeira Sacra white and red, replaced fluids lost from the previous night and restored our internal chorizo equilibrium. Cachin is the property of the César Enriquez family who, among the core group of founding growers of what was to become D.O. Ribeira Sacra, reconstituted their vineyard site to noble varieties from the early 1990s. Peza do Rei is a medieval walled vineyard and woodlands estate taking its name from the Kings of León (Rex on Fire?), for whom it served as an income source and private hunting retreat. Peza is Galician dialect for Pieza or Trozo, meaning “parcel” and gives its name to a famed 5 ha parcel of vertiginous, single-row slate terraces forming a perfect south-facing amphitheatre on the Edo River tributary of the Sil. The red from here is a melange of autochthonous Mencia, Brancellao, Merenzao, and Caiño tinto. Light bodied, sappy, mineral, crunchy red fruits (redcurrant/cranberry) with refreshing acidity, this wine carries all the aromatic lift of the vineyards whence it comes and nails slivers of local ham to the sticking point. 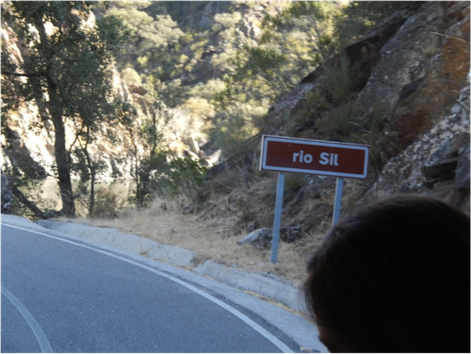 Her name is Rio and she dances on the sand
Just like that river twisting around the steepling hill
And when she shines she really shows you all she can
Oh Rio, Rio dance across the Rio Sil

Next on the agenda was a boat trip on the River Sil with the local Darby and Joan Club as someone put it. The craft was a double-decker – we were on the lower bunk and crowded onto the seats in the stern the better to soak up the sun.

The boat eased gently into the centre of the river; we chugged along at a steady 4kph up-Sil marvelling at the perpendicular cliffs and craggy outcrops. It seemed miraculous that the dizzy vines wouldn’t slide headlong into the water from their precarious perches, following down where giant boulders had tumbled into the gorge.

The only riparian inhabitants were a pair of lugubrious herons, otherwise the silence was only punctuated by the putt-putt of the engine and the gentle murmur of the top deckers. Various soporific Pyrennies lay comatose on the banquettes, restocking their energy accounts with copious zeds. Eventually, we reached the limit of our aquatic peregrinations and were sufficiently “gorged”, the boat thereupon circled and “riverrun, past Eve and Adam’s, from swerve of shore to bend of bay, brings us by a commodius vicus of recirculation back to the j’etais.” Vin-agains Wake. Wake. Up. Thierry. Andrea. Paul…

We piled back onto the coach, drove back to the winery and then trooped up a mountain path to inspect Cachin’s key vineyard, its terraces cascading into the valley, dramatically set amidst a sea of forest and scrub and interspersed with granite, slate and white rock. This is Mencia territory with a sprinkling of other varieties such as Merenzao and Brancellao.

In Spain you are never far from a prodigious meal and lunchtime was fast approaching on vast trunks of meat. My memory of this feast are hazy to say the least since I was doped up on anti-cold remedies, but if I say empanadas, pulpo, sausages and the chunkiest of chops, you’ll catch the drift. More than anything I craved greenery for relief, and yet, when as if by magic, some salad appeared, the leaves were practically belching with vinegar. A dark meat cloud hung over my stomach; fortunately, a flask of aguardiente materialised and one mini-beakerful of this 70% firewater was enough to dissolve all impediments to digestion (plus a million brain cells and several vital organs).

And so out into the now almost blinding light, all aboard the bus and onwards to Valdeorras, nearer my Godeval to thee.