13:00-14:00 – Wine tasting and Lunch at Iago’s wine cellar in village of Chardakhi read the itinerary. The meagre description could never do justice to the effusive hospitality we were to experience.

We arrived at Iago’s house/cellar just after noon. A barbecue with skewers of meat charring nicely was in full smoke in a garden planted with vegetables, flowers and fruit trees – nature’s abundance in microcosm – and over to the left a canopied terrace where a long table was already beckoning us to lunch.

“No one wants to leave Iago’s place”.

We move from the eye-jamming sunlight into the relative cool of the immaculately-clean cellar where the qvevris dwell. Apparently, almost every single family in Georgia makes wine in qvevri (for the table), but the commercialisation of the wine (or bottling) is a comparatively recent phenomenon for political reasons. It is important to understand that the Georgians are fiercely proud of the qvevri, for not only it is associated with the ancestral vessels in which the very first wines were made, it also has a powerful symbolic resonance. Buried in mother earth and made out of clay, it is of the earth itself. There is a pleasing circularity in the making and drinking wine – the vines with their roots plunged in the clay, the qvevri forged out of the clay, the clay drinking vessels…

Back to Iago. He has always worked organically in his small vineyard in Chardakhi (total production is probably only around a couple of thousand bottles) and been passionate about preserving the local traditions.  There are photos on the wall of the man himself and one of one of his ancestors standing beside a giant qvevri. We notice the traditional winery implements such as cherry-bark scrubbers, clay gourds and other sticks and brooms to manoeuvre stones off the qvevri or to clean away the dirt. For Iago intervenes minimally; for him and many other Georgians man is simply a facilitator; moving things around and making sure that everything has exactly what it needs to function happily and healthily.  The approach could almost be summed up thus: entrust the vintage to nature and God, entrust the wine to the earth – and all will be well.

I was reminded of the quote that science and technology “revolutionize our lives, but memory, tradition and myth frame our response.”

John Wurdeman explained that many growers in Georgia wouldn’t understand the question: “What chemicals do you add to your wine?” Presumably the devil does live in the puff of sulphur, but this is also a wine culture that has developed in isolation from the commercial intensive-farming techniques of the rest of the Europe. Of course, there is industrial winemaking in Georgia, but the wine that people make for their own consumption is naturally free of additives. In this sense the qvevri is more than just a vessel to ferment wine; it is the continuation of a natural tradition. 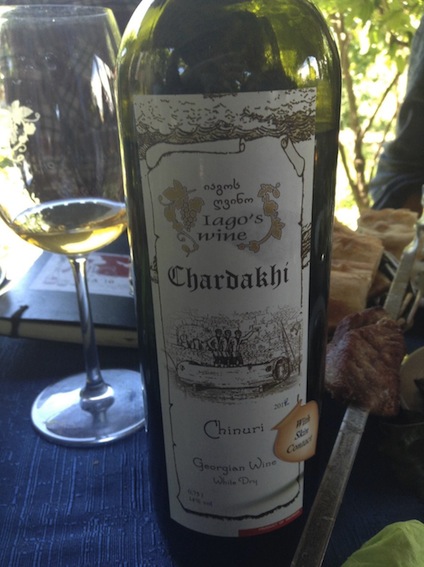 Iago works with only one variety – the light-skinned and late-ripening Chinuri – although he makes two versions of it; one with skin contact and one without.  Skinless is stomped by foot whereas skinny is gently crushed before the whole bunches are surrendered to the clay and remain there for three to six months to accrue colour, body and tannin.

Nothing is rushed here, however. Iago’s clean skin wine is left to nestle in the earth for two years before bottling, although it is transferred from one qvevri to another during that time. With a strong yeast population the ambient fermentation will proceed healthily and at its own pace and Iago will break the cap to allow the gases to escape. The malolactic proceeds naturally once the qvevri have been topped up and at the end of the year the jars are sealed wherein a large flint stone or a piece of glass is placed over the aperture and itself is then further sealed with wet clay and covered in damp sand.

It is an honour to be present at the opening of a qvevri. And so the flint stone is lifted and glinting wine ladled into the glasses. A palpable ripple of anticipation and chittering i-phones as the liquid is lifted gently out of its clay cradle. It is as if we are witnessing the birth of a wine.

The wine passes the lips, slides across the tongue and disappears – it has a cool energy as if each particle was charged with life. It tastes very natural and simple with raw minerals permeating the other delicate flavours of wild mint and pear. At this instance you either commit to the moment or remain an objective taster to the bottom of your drinking boots. Whilst it is difficult to shake off the recording angel mentality, the seriousness of furrowing brows and furling pens and the critical convention that all wine is a substance to be decoded, analysed and evaluated according to a tasting paradigm, when you are tasting from a qvevri, glugging from a jug or toasting from a pialla (or piyalla) you can understand wine as a vernacular language and not as a comparative science.

We moved to the large table under the arbour which was laden with an overwhelming quantity of appetising food. Huge tomatoes, sweet cucumbers, bouquets of tarragon and wild parsley, chanterelles, cheese, constantly refilling baskets of bread, quails and their eggs, kebabs of chicken, lamb and assorted other meats are piled on the table, and when there is no room, they are piled on top of each other.

The bright sunshine and the golden wine gives us an appropriate appetite, but the food cannot be conquered.  Eventually, the drinking horns circulate around the table; you are meant to hook your arm through that of your neighbour and drain your respective horns. As it were. The spiral shape ensures that liquid lurks in the recesses, but with twisting, subtle inversion and a wide enough gullet you can generally shift about half a pint into your mouth, before bounce-back occurs.

What is Deliciousness Part 2: The Stepford Wines