I’m at home having a “madeleine episode”, prompted by drinking/guzzling Iago Bitarshavili’s Chinuri (Skin Contact) out of a clay drinking bowl. This bowl has recently been the repository for olives and coco-pops care of my five year old daughter, but the wine shines through and the song remains the same. It is a fragment of Georgia, a memory of a beautiful day, an arboured lunch, gold-glinted wine, laughter and wonder.

After spending only one day in Georgia I was reminded of the quip in Saki’s The Jesting of Arlington Stringham about the people of the country who make more history than they can consume locally. Except here the Georgian people not only absorb their history with gusto but have carved a unique and enduring (and endearing) national identity from it.

And so to the pottiest of potted historical primers. In antiquity, o best beloved, Georgia was known as Iberia (Eastern Georgia) and Colchis or Colkhida (Western Georgia). Yes, Iberia – and no-one is quite sure why other than that the Romans and Greeks referred to it thus. The Georgians themselves refer to their country as Sakartvelo, which translates as the place surrounding Kartli, a central Georgian province. The country itself (which is only just over half the size of England) straddles an isthmus of land stretching between the Caspian and Black Seas, making it the literal crossroads between Europe and Asia. To the north the towering Great Caucasus Mountains provide a stickle-backed snow-capped barrier and backdrop whilst the remainder of the country is a patchwork of meso-climates with mountain ranges dropping down to sub-alpine forests into fertile valleys, semi-deserts, steppe lands and to the tropical coasts of the Black Sea.

Georgia’s rich and varied recorded history encompasses 2,500 years while its capital, Tbilisi, traces its origins back over 1,500 years. Georgian, a South Caucasian (or “Kartvelian”) language, unrelated to any outside the immediate region, is apparently one of the oldest living languages in the world and has its own distinct alphabet and is spoken in three different versions: Megrelian, Svan and Kartuli. Amongst all the other cultures and civilizations that have impacted Georgia one is struck by the local indigenous culture which still shines through, making the cultural fabric of this nation one of the most layered and sophisticated.

In the early 4th century, Georgia became the second nation in the world to officially adopt Christianity. Georgia has historically been situated on the margins of great empires, and Georgians have lived together in a unified state for only a fraction of their existence as a people. Since at least the 1st century B.C. through the 18th century, much of Georgia’s territory was fought over by Persian, Roman, Byzantine, Arab, Mongol, and Turkish armies. The zenith of Georgia’s power as an independent kingdom (“the golden age”) came in the 11th and 12th centuries, during the reigns of King David the Builder and Queen Tamar, who rank among the most celebrated of all Georgian rulers. A unique and enlightened Christian culture flourished. This was the era of great building projects such as Gelati and Vardzia and the birth of a vibrant literary tradition revered to this day. It was to Queen Tamar that Shota Rustaveli dedicated his great epic poem, “The Knight in the Panther’s Skin,” a poem exemplifying all the virtues of chivalry and honour that were celebrated throughout the expanded Georgian Kingdom during her reign.

So far, so guide book. 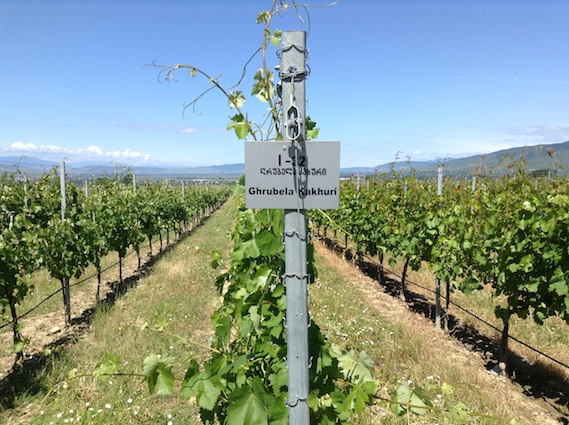 Georgia is also one of the birthplaces of wine culture and wild vines – Vitis Vinifera Silvestris are still widely distributed across the country. Archaeologists and historians have discovered evidence and material artefacts including eight thousand year old grape seeds and antique vessels (pruning knives, stone presses etc.) as well as written testimony of foreign chroniclers and travellers.

According to a poem by Apollonius Rhodius, the Argonauts, having arrived at the capital Colchis, saw twining vines at the entrance to the king’s palace and a fountain of wine in the shade of the trees. That Homer, Strabon and Procopius of Caesaria used to mention it in their works leads wine historians to surmise that it was the Transcaucasus, especially Georgia, which was the native land of the first known cultured grape varieties and that it was also from here that the vine spread to many European countries. Xenophon in the 5th century recalled it thus: “That Caucasian tribe who lived in the Black sea coast (and who) prepared strong wine.” Everyone was a critic back then.

Wine’s name itself is of Georgian origin “Gvino” and October, harvest month, is named “Gvinobistve” (the month of wine). Mosaics attest to the influence of the Georgian wine god “Aguna”. The cult of grapevine and wine forms part of the Georgian psyche – present from spiritual and religious symbolism to the more earthbound aspects of life. In the first part of the IV century St. Nino arrived in Georgia bringing the word of Christianity with an upheld cross made in the shape of an intertwined grapevine arbour. The symbolism of wine is powerful: Kartlis Deda (the mother of Kartli) is a dominant 20-metre tall white aluminium statue on a hillside overlooking Tbilisi. She symbolizes the Georgian national character: in her left hand she holds a bowl of wine to greet those who come as friends, and in her right hand is a sword to repel those who would come as enemies.

The continuous importance of winemaking and drinking in Georgian culture is also visible in various antique works of art. Many of the unearthed silver, gold and bronze artifacts of the 3rd and 2nd millennia BC bear chased imprints of the vine, grape clusters and leaves. The State Museum of Georgia has on display a cup of high-carat gold set with gems, an ornamented silver pitcher and some other artifacts dated to the 2nd millennium BC. From classical Antiquity, Georgian museums display a cameo depicting Bacchus, and numerous sarcophagi with wine pitchers and ornamented wine cups found in ancient tombs.

Wine, as evidenced from the Georgian folklore and history is used for solemn or mournful ritual, in copious quantities and rarely, if ever, diluted. The French traveller, Chardin, wrote in the 17th century, that there was “no other country in the world in which wine was so good and drunk so amply, as in Georgia.” As friendly visitors we would be able to testify both to the good quality and the ample nature of wine consumption here! 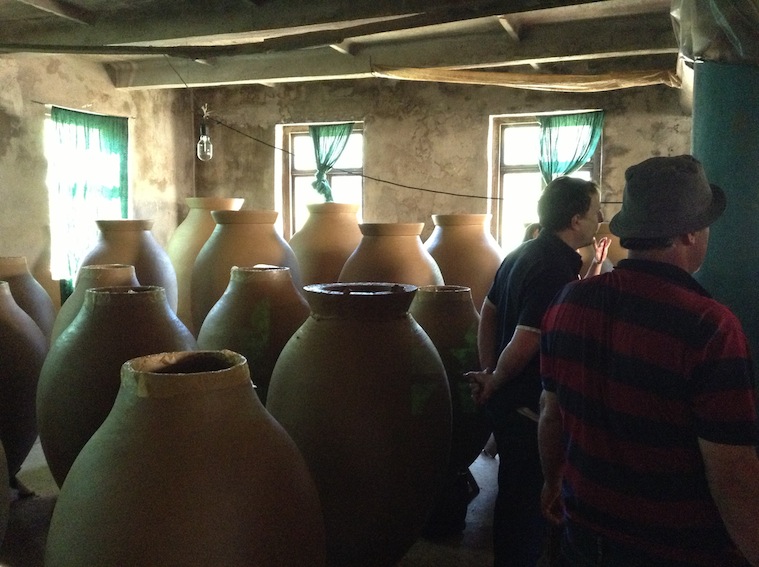 The methods of Georgian winemaking have remained the same for thousands of years. Clay vessels, lined with beeswax, are buried in the cellar or in the earth, where the fermentation takes place, extracting colour and tannin from the grape skins. The whites are amber, tannic and strong in flavour and texture, and thus a perfect accompaniment to the food. Georgia is home to over 500 different grape varieties, of which around 30 are in common production with more coming on stream all the time from the State Nursery. More on this anon.

We speak airily of wine culture, but Georgia is a true example of a living wine culture. To me that means not a dilettantish aesthetic interest for the subject but something that belongs to you and that you feel on your very pulses. The culture moreover involves farming with respect for nature and the environment, deeply valuing your vinicultural heritage, making the wine sympathetically and patiently for the simple purpose of bringing people together, promoting laughter and good will.  From the roots of the vine, to the grapes from myriad local varieties, to the Qvevri buried in the soil holding its precious liquid, to the jug on the table and the drinking vessel used to toast guests and herald special occasions, Georgian wine encapsulates ritual and romance, the spirit of generosity and celebration, national identity and individual energy. To adapt the words of Jebediah Springfield: “Wine embiggens the soul.”

A Humble Alternative to the Top Fifty Vineyards in the World

Chapter Three: They have embiggened our soul. Part Three