If I may rehash my chirpy cockney praise for natural wine fairs:

A bit of natural wine, from the organic vine
More than good, it’s fine – it’s out of the box
Drink till you’re dotty, till you’re knocked onto your botty
But not until you’re grotty – just rocked out of your socks

Reasons to be cheerful part 3

– with apologies to Ian Dury

A good fair encapsulates the best of all possible wine worlds. Exuding positive energy it creates an aura of fun and friendliness. No-one would deny that this wine may flaunt its imperfections or that wine may not accord to a certain taste, but when growers radiate such bonhomie and when the wines themselves radiafe individuality, then healthy creativity collides with receptive aesthetic and visceral appreciation, and the resultant sparks further galvanise the event, making it an oh-so refreshing alternative to the usual humdrum tasting forums devoted to narrow commercialism. A good fair lives up to being both good and fair!

Sans corporate bigwiggery, sans wheeler-dealing, sans profit,  sans suits and suitors, natural wine fairs are designed (in as far as they are designed) to foster the spirits of enquiry, camaraderie and copinage. They advertise without fanfare the virtues of organic and biodynamic farming and the positive way that low intervention winemaking can extract and interpret the nuances of terroir and the originality of the vintage. The Real Wine Fair itself is big enough to present a healthy cross-section of what is going on in the, ahem, alternative wine world, and to demonstrate the sheer variety within it, yet not so unwieldy as to be too big for its drinking boots. The buzz this year was palpable, the growers visited by many curious customers, but not so many that they became little more than animated pouring machines!

We received dozens, if not hundreds, of tweets and mails In the aftermath of the fair, alluding to people’s positive experiences and their enjoyment of the wines. We may flatter ourselves that all is for the best etc, nevertheless it is still a world apart, for, over the same period as we were running the Real Wine Month in cahoots with some of the UK’s finest restaurants and independent retailers, were you to delve into the trade magazines and professional blogs you would have only read a succession of stories highlighting (not in a critical way) unsavoury practice, greed, hype and cynical slavishishness to the market. This is Wine OK! The parallel self-reflexive universe of style over substance, where the demi-mondovino revolves around money (“Liv-ex Lafite’s indices are showing growth”, yippee!) and celebrity, and breathless gossip, like rumour painted full of tongues, sucks up the column inches (“Tang hits out at fake wine allegation”), and where the panjandrums of prosperity and the potentates of points become the caliphs of mutual calumny fighting their battles in public. It may be to settle the precedence between a loaded louse and a flush flea, but when you dip into the Wine Advocate vs Galloni argle-bargle or the Koch/Greenberg legal spat, the former protagonist described “like Ahab in his pursuit of those he claimed had done him wrong” (all of which surely puts the **** into Moby Dick) you have to ask yourself: “Who cares?”

This is the world of fees, fies and foes… (and ho-hums)

And this is evidently the only news that’s fit to print for a number of trade magazines, a condensed version of reality amounting to little more than sound-bites and tittle-tattle. The real wine world went offline some time ago realising that the only way of engaging with people was to respect them as individuals and treat them as more than passive susceptible-to-hype consumers and allowing them to taste the wines on their terms and respond accordingly. For all that is written about natural or real wine the terms of reference have been declassified in order that we may focus on what is truly valuable – the growers and their artisan products, the drinkers and their opinions. When natural wine first emerged as a countercultural phenomenon it generated the right kind of publicity (an awareness that terrific wines could be made without chemical additions) and the wrong kind as well (the pedantic linguistic debate, a series of contumelious generalisations about an amorphous range of wines, growers and drinkers that didn’t withstand critical scrutiny but produced plenty of heat). While all this pointless verbal jousting took place, however, more natural-style wines were being made every year, more natural wine bars springing up in the major citiies in the world and more wine merchants and retailers were putting the wines on their shelves without fuss. The more solid the phenomenon the deeper its roots and this one, like old old vines, is profoundly entrenched.

“Leroy bet me I couldn’t find a pot of gold at the end, and I told him that was a stupid bet because the rainbow was enough”. –Rita Mae Brown

Relevance in the wine world is too often gauged by whether something is perceived as trendy or whether it conforms to an overarching commercial imperative or hierarchical notion of what is right or wrong, good or bad. The idea that wine growers might make wines primarily to please themselves and their friends seems extroardinary to some, yet this is in keeping with centuries of tradition, when wine was formerly a humble drink and not a commodity.

Of course cities and commerce were, and will continue to be, essential factors in the development of civilization, but the critical questions that regard humanity, the qualitative leap of “consciousness” that we must undergo to allow the earth to sustain us will be achieved only though a “radical new look” at our relationship with the environment.
In this manner, the « autonomous » farmers are critical players (to whom we should allow free speech rather than to so-called experts) of tomorrow’s world.

“The fascination that people have with the wine world is a result of being in touch with “essential things”, those things that put us in relation with the earth that we walk upon and the cosmos from where life has emanated.” –Thierry Valette, Clos Puy Arnaud 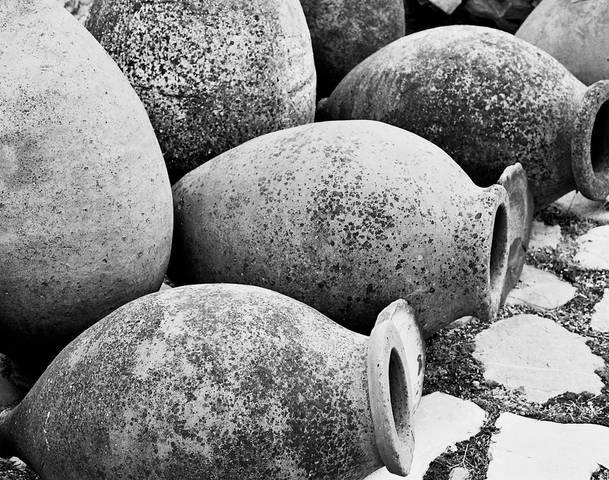 I’ve witnessed these past weeks how money is not necessarily the root of all wine and that the customary terms of critical reference need to be shelved on occasion. Georgian wine culture is undergoing a revival, partly due to government encouragement, and mostly because of the collective efforts of a few dynamic growers (and friends). It would be easy for this country to become another outpost of international varieties and churn out the same old, same old on demand; the nature of Georgian wine, however, is inextricably linked to tradition through a strong shared folk culture. Georgia is not only a different place, but also seems to be a different time and the growers revel in that bubble. Indigenous grape varieites are prized, while the natural ways of making the wine have never been abandoned and are now not only fiercely cherished, but exalted. A powerful sense of national identity is expressed through wine in Georgia, not just the interesting end result of wine qua wine, but the historic cultural processes that bring it to the bottle and predispose the way that wine is served. Hospitality is written into the Georgian DNA – food, wine and friendship are linked – and so the wine is the people’s blood, sweat and happy tears.

The vine and the wine have a poignant symbolism, for when you live according to the rhythms of the growing seasons, when you give thanks to the providence of nature, to God, to your efforts as a humble grower and those who assist you in the enterprise, everything is felt at a deeper level. Wine, moreover, symbolises love, earthly love and spiritual love (God’s love), similar to that expressed in texts such as The Rubiyat of Omar Khayyam and The Book of the Winebringer. There is a beauty-in-simplicity in this “emotion” that resonates with growers from other countries who have always believed that winemaking should be natural and view the Georgian experience as the purest example of the craft, and one which gives a philosophical and poetic framework to their own activities.

These wines exist not to flatter the so-called modern palate; they are intended to capture the blood of the soil, the song of the earth; and represent the natural cycle of taking out and putting back. The qvevri is a clay vessel moulded from the clay into which the vine plunges its roots;  when the wine is put in the qvevri it is being “put back on its feet”. Georgians call leaving the wine on the skins ‘leaving it with the mother’, and particularly, when the grapes are organically and biodynamically grown, she does an amazing job. She gives nutrients, protects, adds textural richness and layers of complexity simply not achievable without such close synergy between liquid and solid. The qvevri not only holds the wine, but animates it.

The language of religion permeates the notion of winemaking and our response to these wines.  Birth and rebirth, gift and sacrifice, love and peace, thankfulness and prayer – without this underpinning the context of Georgian wines cannot be fully appreciated.

In producing honest and personal wine, (that is to say that could not be produced elsewhere) not only the Georgians, but those who work in an equally beautiful and valid individual idiom, serve to protect cultures that prize singularity and humanity against a global movement that favours homogenisation and commercial aptitude. Salvaging and promoting diversity is a laudable objective; this is not to say that there isn’t room for commercial wines and the marketing of them. Of course there is. The natural wine fairs, however, show that there is a whole other world of wine out there.