Michel Chapoutier planted his soap box firmly on the ground and gave of his wisdom according to The Drinks Business. 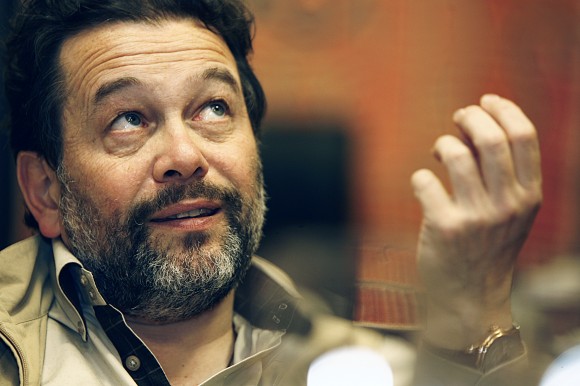 If absence was air then, as with all critiques of natural wine the opposing view was fully aired in The Drinks Business article. It is a tribute to the UK wine press that the subject of natural wine is sympathetically and intelligently discussed without any editorial bias or jot of sensationalism.

“If you do put out a wine with high VA [volatile acidity] or too much Brettanomyces, don’t lie and say that it is the goût de terroir,” he remarked. “That’s how they made wine 200 years ago.”

Old things, baaad, new things good. They were all self-deceiving incompetents and liars two hundred years ago, because they didn’t have the foggiest idea about terroir Everyone was naturally more ignorant those days, because I wasn’t around to correct their mistakes. The more modern we are, the wiser we become.  By definition. By my definition. So what does it matter that 90% of wines in France have pesticide residues – that’s progress, cherie!

Those VA wines have no va va va voom!

Don’t lie to I, Michel Chapoutier, wine sage, entrepreneur, self-publicist and seer, and tell me Brettanomyces is spelled the same as Gout de Terroir. They are completely different words. I am the man who can tell you all about gout, because I have gout coming out of every orifice.

Complaining that the Appellation d’Origine Contrôlée system had become “like a marketing gimmick,” he argued that as its profile grew, “too many people began to use the name as a brand, but with no sense of respecting the terroir.”

I know nothing about brands – I only make 7 million bottles myself. Natural wines are climbing on board the AOC bandwagon, crudely purloining the cynosure that is appellation accredition. By not using chemical additions to homogenise their wine they are not respecting the wine, allowing it to be ruined, ruined, I tell you, by unnatural natural winemaking processes. These people are terroir terrorists.

Instead, Chapoutier insisted: “To be called AOC, the wine has to be representative of the AOC – they can’t make wines with defects. We should guarantee that what we offer not only guarantees the place, but represents the place.”

A fault is a fault is a fault. You cannot be slightly faulty any more than being slightly pregnant. It is a truth self-evident that the only wines with defects are so-called natural wines. A good dose of chemicals cures all defects. All wines without natural defects are good representations of place. High sulphur wines like Beaujolais Nouveau are a true advert for the region, not so natural interlopers like Descombes, Lapierre, Foillard, Lapulu, Jambon, Thevenet… It is more important that the wine be correct than anything else. Correctness is truth, just as arbeit macht frei.

Praising the work and quality recognition achieved by high profile biodynamic pioneers such as Lalou Bize-Leroy and Domaine de la Romanée Conti, Chapoutier acknowledged: “Today thanks to the work of biodynamic and organic farming we have never seen so much diversity.”

Thanks to biodynamic farming we have never seen so much diversity.  I have so many different labels: Crozes-Hermitage, St Joseph, Cotes du Rhone, Chateauneuf-du-Pape. All from the Cotes du Chapoutier where the sun  doth metaphorically shine. As for biodynamic Burgs I suppose I should give credit where credit is due. These wines must be good because they fetch a lot of money and I, Chapoutier, respect that.

However, he criticised the “dreamers” whom he believes have pushed biodynamic principles too far, remarking: “If you have a horse smell in the wine that is a defect. If you have Brett, the same horse character will be in Bordeaux, Burgundy and the Rhône – you lose the authenticity.

You should not allow the horse to poop in the vineyard (nor die in amongst the vines). That’s where the horsey smells come from. Extremist biodynamic winemakers are not filtering out the horsemeat as they should. Nor should you allow someone called Brett to work for you – he’s a hippy who never washes. These people are dreamers – but they’re not the only ones, I hope you come and join me and your and my grapes will be as one.

In reference to the vocal advocates for natural wine, Chapoutier commented: “The danger of the ayatollah scares me.”

This is apropos of nothing but Persian clerics who teach the Koran in Islamic seminaries are well scary. If they would issue a fatwa on Salman Rushdie imagine what they would do to sane and rational people like me. Although I  myself do have a becoming beard, enjoy preaching myself and issuing hate edicts about those who apologise for natural wine.

However, he stressed that he is not opposed to the exploration of new ideas, pointing to his own discarded trials with kosher wine as he clarified: “I don’t say they are wrong, I say you need to make experimentation, but when the result is bad, you need to destroy it.”

I discarded trials with kosher wine because it offended the ayatollahs. I am not a dalek but I do believe in extermination. Of bad wines. I don’t say they are wrong, but I do say they are wrong. Bad wine has the same toxicity level as some of  my more outlandish pronouncements. I’m a modern traditionalist – I have no idea what that means, but I like having my paradoxical argumentative cake and eating it. And I have no idea what that means either.

In particular, Chapoutier defended the use of sulphur dioxide in winemaking, a treatment which is characteristically avoided by the natural wine movement.

The natural wine movement which exists even though it is a fiction I have contrived for the purposes of this diatribe, collecively avoids sulphur dioxide (except for virtually all the growers who use even a little bit).  J’ accuse! Creating this straw man shows I am capable of extreme doublethink, which adds to my illustrious aura as the Big Brother of the wine world. If the cap fits wear it – if the cap sinks filter it off.

“The idea that sulphites are bad is a lie,” he maintained. Pointing to their important anti-oxidation and anti-bacterial role, Chapoutier stressed instead the importance of achieving the right balance.

I created the idea that natural wine growers believe that sulphites are bad. Which is a good lie on my part. Every time I speak about wine a natural wine oxidises to death. My breath is as a dose of sweet sulphur, a fragrant anti-bacterial. That’s what being profoundly right all the time does for you.

Why have free sulphites when you can pay for them?

As for those who refuse to add any sulphur to the small amounts that occur naturally in wine, Chapoutier questioned: “People can choose to use no sulphur but how will they deal with the percentage of wines that are not good?”

How will they deal with the percentage of wines that are good? They’ll go the nearest supermarket and pour every bottle down the drain. That’ll learn them.

Recognising the economic issues of abandoning stock, Chapoutier nevertheless warned against turning a blind eye to inferior quality, saying: “I would prefer for the collective to give them money to destroy it than that they should lie to consumers.”

Only I, Chapoutier, may determine what is inferior quality. You may infer from the rigorous logic of my sane & rational arguments that is all natural wine.

To those producers who still wish to release their product, Chapoutier requested that they avoid using the AOC label. “Sell your wine that smells of horse as a table wine with your name on it, but don’t sell it as Pommard or Morgon,” he implored.

Don’t besmirch our pristine new labels with your horse poo. Your wines are vins de table, mine are vins de stable. Only your wines smell of the stable and only mine are fit for the table.

As for whether there should be stricter AOC criteria for quality, Chapoutier welcomed changes in thinking within the INAO (Institut National des Appellations d’Origine) in recent years.

I’m gonna ensure that they change AOC to AQC.

“When I first arrived in the INAO, the question I asked was about quality, but they said ‘We are speaking of origin not quality’ – can you imagine?” he recalled.

I told them INAO was INAO and they needed to stick their origin where the sun don’t shine.

Today, however, Chapoutier pointed to a steady shift within the regulatory organisation. “It is only five to seven years since the INAO considered itself as the house for origin and quality. Today they have understood the quality,” he confirmed.

It doesn’t matter what the origin of the wine is as long as it conforms to my notion of quality. The INAO was indeed fortunate that I was around to impart my horse pats of wisdom.