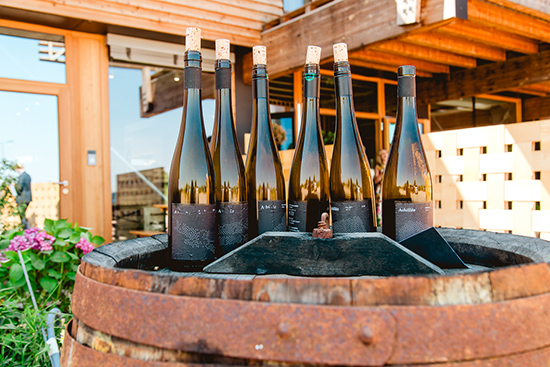 The Dietrich family has farmed land in Alsace since 1600 mostly in the village of Scherwiller but also in an adjacent village. Historically, the family farm was to be run on the basis of polyculture, however the family now concentrates on growing grape vines and other fruit. In 1999, Yves converted the estate to organic farming (at the time he would sell his grapes to the local cave cooperative), then Pierre and Jean took over the responsibility of the winery in 2016 and were the first members of the family to bottle the estate’s wines. The estate has been farmed biodynamically since 2003, and comprises 18.5 hectares of vines and 6 hectares of fruit trees from which the family also produces a range of fruit Pet Nats from black and red cherries, damsons and Victoria plums. The Dietrichs grow all the Alsace grapes in variety of locations, altitudes and expositions and on different soils, ranging from the poor, stony ground of the village of Scherwiller, decomposing granite of the slopes in the top quality local Grand Cru zone ( ‘Frankstein’ Grand Cru’) and the schistous soil of the nearby villages of Schiefferberg and Bernardvillé.

How do you like them grapes: The whole Alsace range: Riesling, Pinot Gris, Muscat, Sylvaner, Chasselas, Gewürztraminer, Pinot Blanc, Auxerrois and Pinot Noir.

In the vineyard: Farming is certified organic (Ecocert) and biodynamic (Demeter). Vines are treated with essential oils to reduce the need for copper. Lots of work in the vines – debudding, careful trellising, shoot thinning. The family uses only one type of vine cut and vine training in its estate- bending the vines in two arch-like curves. Pierre explains that the resulting shape looks like a large letter ‘M’, and jokes that they thereby do free advertising for McDonalds in their vineyards. 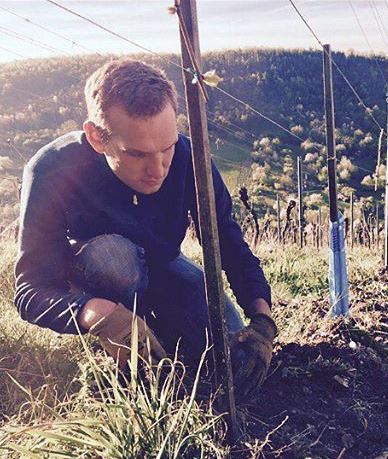 In the winery: Grapes are carefully selected by hand and harvested into small crates. For the whites, the grape must settles naturally (sedimentation). Ferments are made with native yeasts in stainless vats with limited temperature control. Malo occurs naturally. Ageing is on the fine lees for up to 22 months, depending on the wines. No fining, loose Kielselguhr filtration, low sulphur addition before bottling. The Pinot Noir is part-destemmed, part whole clusters, a blend of free run and press juice. No filtration and around 15 ppm SO2 added before bottling.

QI: The cellar located in the heart of Alsace is apparently the largest building made out of straw in Europe!

‘Achillée’ (pronounced ‘Ackillay’) is the name of a plant, Achillea Millefolium (Common Yarrow in English), that is used as an infusion in biodynamic farming. It grows naturally in vineyards, and it is sometimes planted intentionally in by vignerons for its ability to enhance the antifungal powers of plants growing near to it, therefore reducing the necessity of regular sulphur spraying on vines. It is also planted for its capacity to contribute coolness and energy to the vine plants in the summer heat. Pierre comments that, ever since his family converted its vineyard to biodynamic farming, this flowering plant has grown naturally amongst all their vines and, even though the Dietrich family’s estate contains five different soil profiles and several different micro-climates.

Food match: The lighter whites with simple white fish dishes, the more complex single vineyard Rieslings will match Japanese cuisine, white meats served with creamy sauces, carpaccio of fish, scallops, and lamb roasted in its own juices and flavoured with fresh thyme. The Pinots go well with barbecued meat or duck or grouse and also with coffee/chocolate desserts.

Philosophy: Pierre sees structure of this flowering yarrow plant, where the many tiny flowers are in a cluster, equidistant from each other and from the centre of the flower, each sharing the sun in equal doses, as a visual symbol of the relationship between the vigneron, the wine distributors and the consumers.

Chatting with: Villalobos, home of the wild vineyard