The Fatalone name originated with Filippo Petrera (2nd generation), Nicola’s son, who was, in his time, nicknamed Il Fatalone. It quickly caught on becoming the family nickname. Fatalone translates literally into ‘Lady Killer’ or ‘one who can boast to be an irresistible seducer of women’, much like the legendary Don Juan. Filippo Petrera lived until the age of 98, metaphorically speaking between Bacchus and Venus, having breakfast every morning till his last day with half a litre of Primitivo and half a litre of fresh milk.

In 1987, Fatalone became the first winery to produce and bottle the Gioia del Colle D.O.C. Primitivo as a single varietal wine. In 2000, in the spirit of promoting and the land and its local product, they founded the Consortium for the Protection of the Wines of D.O.C Gioia del Colle.

The estate has always practiced organic farming and since 2000 has been Certified Organic by the Institute for Ecology and Ethics Certification (I.C.E.A). In 2003, a new state-of-the-art cellar, carved in the rocks next to the ancient Masseria, was built combining ancient tradition with modern techniques and technology. The cellar is solar-powered, part of the Fatalone philosophy to work in an entirely sustainable fashion.

The area in question is called Gioia del Colle. The Fatalone vineyards are located between two seas: the Adriatic (45 km to the east) and the Ionian (45km to the south). The terrain comprises typical Murgian hilly karstic soil: a mix of clay and limestone, rocky and rich in minerals. To be exact it is composed of thin layers of red earth mixed with limestone and silica on huge monolithic blocks rich in marine fossils. These limestone soils confer freshness by preserving the acidity in the grapes, and since elegance in the wines is the main goal, help the Primitivo to realise its maximum potential.

Primitivo, a thin-skinned grape, is unique in having a second budding or veraison that occurs at the same time as the main crop (racemi). Alongside very few other grape varieties, if Primitivo tips are pruned in spring the secondary shoots, known as ‘femminelle’, will develop an abundance of small rounded clusters. These ‘racemes’ ripen approximately 20-30 days after the main grapes are harvested. This means that in Primitivo vineyards it is possible to have two separate harvests: the first in August to mid-September and the second from the end of September to early October.

Although there has been debate about the variety’s geographical origins, there is little question that Primitivo’s modern-day home is in southern Italy, particularly Puglia. It probably arrived there from the coastal vineyards of Croatia, just across the Adriatic Sea, where it is still grown today under various tongue-twisting names including Tribidrag and Crljenak Kasteljanski.

The farming at Fatalone is organic and everything is done in the vineyard to ensure healthy grapes. After a manual harvest in small cases the grapes are destemmed into stainless tanks and undergo spontaneous fermentation, with pump overs to release carbonic gas. After several rackings the wine is transferred into Slavonian oak barrels (750 litres). No sulphur is added during the winemaking itself.

Music therapy is played to the barrels to assist the process of micro-oxygenation. This involves the diffusion of soft new age and classical music enriched with natural sounds (wind, rain, leaves movement, water flowing and chirping of birds), based on the idea that those soft vibrations improve the activity of the microflora present in the wine and support its breathing when in casks. After this careful maturation the wines are bottled without filtration and a very small addition of sulphites. All the wines are labelled 15% by volume (between 14.8% and 15.8%).

Music therapy is played to the barrels to assist the process…soft new age and classical music enriched with natural sounds, based on the idea that those soft vibrations improve the activity of the microflora present in the wine and support its breathing when in casks.

The classic Fatalone Primitivo in its youth is ruby red with slight burgundy hues. The aromas speak of very ripe fruits and slightly toasted wood and spices with some balsamic notes. Full bodied, rich in minerality and freshness, balanced smooth taste of black sour cherry and plum tending to velvety with ripe fruity notes of blackberry and mulberry, and spices like clove and cacao. The flavour that really distinguishes the authentic Primitivo from Gioia del Colle is the toasted almond aftertaste.

30 years of Fatalone – the wines 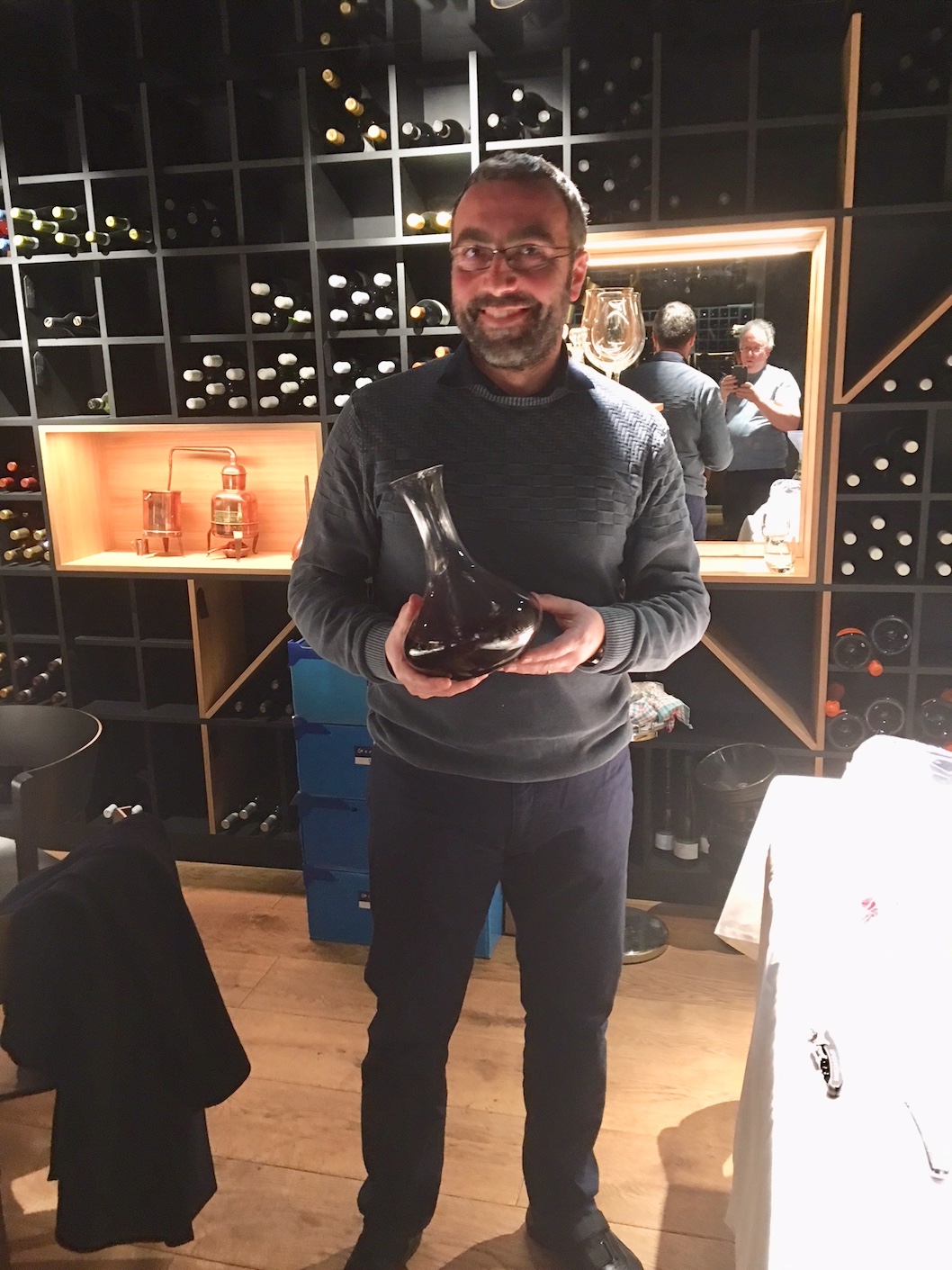 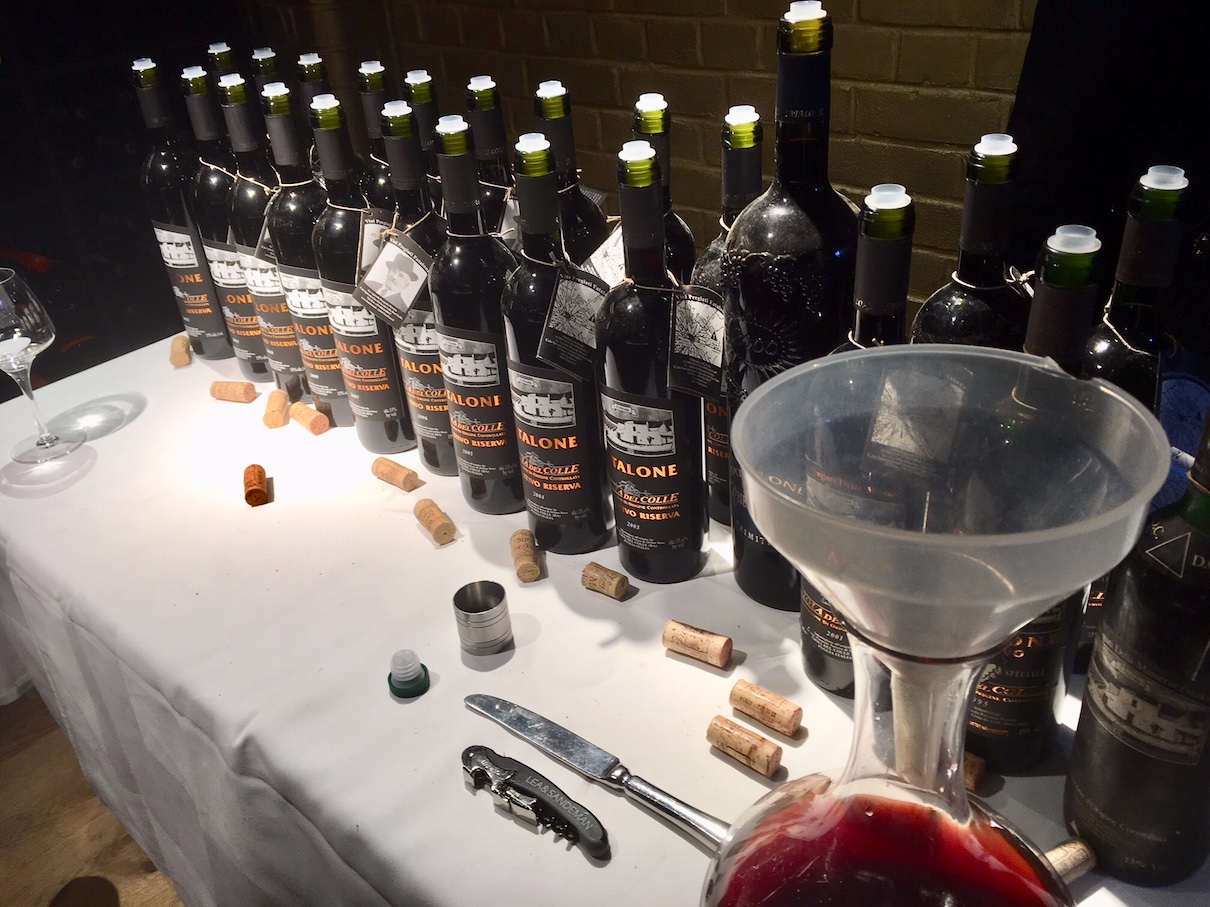 Susan Hulme MW commented on the elegance of the wines: ‘I think the wines are not typical of what we have come to expect of Primitivo in the sense that they are more structural and restrained. They are not fruit and oak bombs.

‘The acidity and minerality and savoury almost salty qualities gives these wines the potential to age and this seems to be a reflection of some of the qualities of the soil and particular terroir.  I particularly liked the 1988, for example, which had great tenacity and liveliness as well as a gossamer fine texture. The 1977 was also so full of life.’

Darren Smith was also surprised: ‘I’ve only ever tried a handful of Primitivos and they’ve tended to be the fruit-bomb entry-level kind.

‘Apart from the alcohol level these were on the whole quite elegant wines, beautifully perfumed with a fine, silky texture. I’d certainly never tasted Primitivo like them and I had the sense that these were something of a one-off.’ 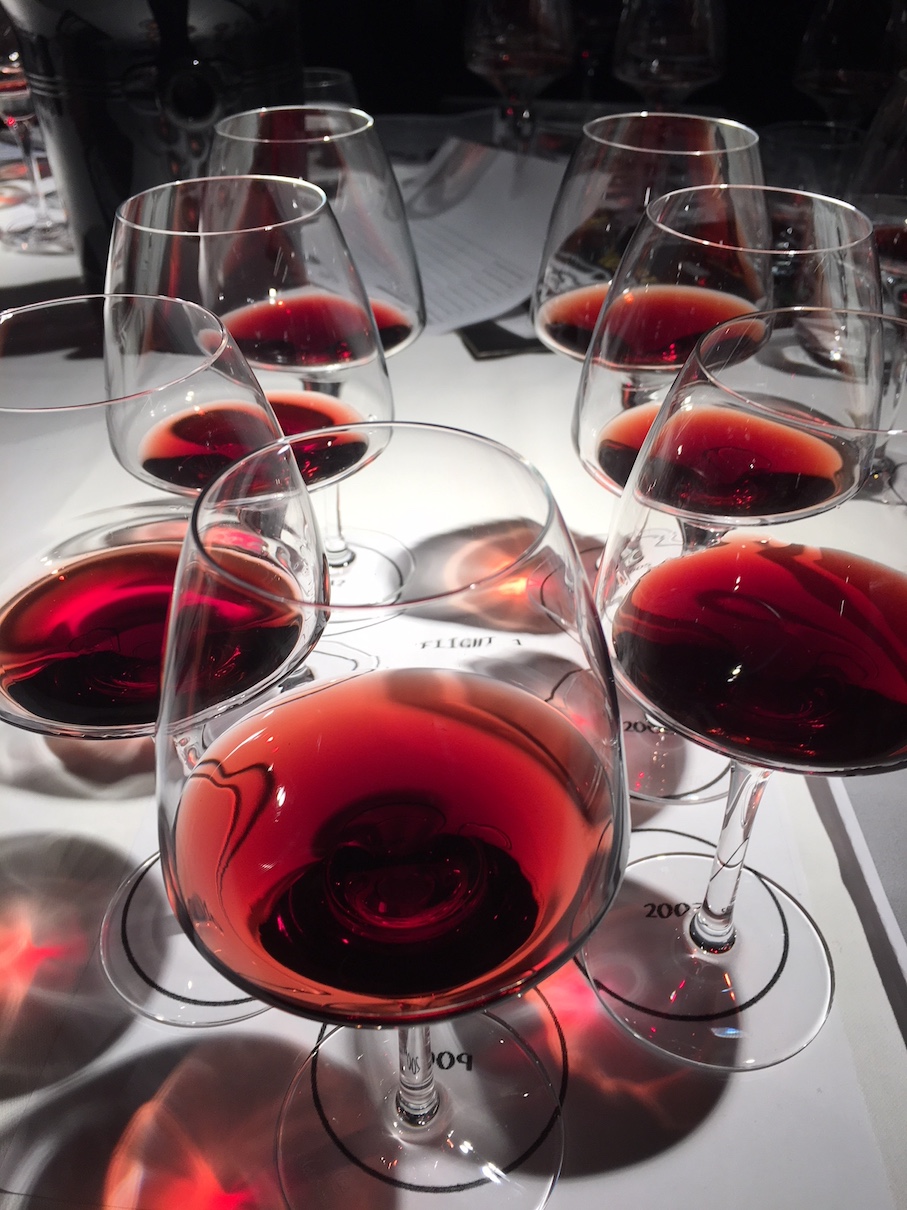 He also felt that they had aged beautifully: ‘Looking at vintages like 2000 and 2007, for example, amazingly well. These vintages had great balance and were just meltingly delicious and complex. A fresh, almost zesty acidity was a common to most of them – even the oldest wines… I want to drink more of these wines. They are so distinctive – that amazing combo of stewed strawberries, cherry, clove, cocoa, bitter almond, hints of negroni. These are really remarkable wines – all the more so after a few years of bottle age.’

Many of the wines managed to retain a fine balance, showing warmth without sweetness, bitterness without astringency, fruit without jamminess and toastiness without oak. This is surely down to the organic approach and the intense focus on detail and precision.

Thanks to Pasquale for bringing these rare specimens of Primitivo to London and for celebrating Fatalone’s 30th anniversary with us. And to Enoteca Turi for hosting the tasting and the wine dinner afterwards.

Interested in finding out more about the wine of Fatalone? Buy online here or contact us directly…

Love and Wine in the Time of Coronavirus: Part Two