It is not just the AOPs that are to blame for certain varieties never falling into fashion. Critical stereotyping seems to occur when there are no obvious standard-bearers for a grape variety. Wine drunk mainly by locals is viewed as having mere quaint yokel value. The Melon de Bourgogne grape, for instance, was derided because Muscadet itself (the wine produced from Melon) was derided. Commercialisation of the product and turning it into a low-rent brand didn’t help the image – Muscadet’s sole function on supermarket shelves was seemingly to hit a price point. It was, to use, our favourite cliché, a product for a purpose, and when a wine does not need to be any better than it is, there is no reason to improve its quality, or for critics to reassess its potential.  Single-minded craftsmen, however, are able to transform the humdrum into something special. With growers such as Pierre Luneau, Jo Landron, Guy Bossard & Marc Ollivier identifying the best terroir, working organically, hand-harvesting the grapes (with resultant lower yields), allowing the wine to spend time on the lees for extra complexity and texture, Muscadets were produced that had an extra satisfying dimension and so the stature of the Melon de Bourgogne grape has been elevated by several notches.

As for historically-bullied Gamay, consolidating its reputation has taken considerably longer. Here a little history is relevant to understand the lack of snob-appeal of this variety. The Gamay grape is thought to be a mutant of the Pinot Noir, which first appeared in the village of Gamay, south of Beaune, in the 1360s. In contrast to the Pinot Noir variety, Gamay ripened two weeks earlier and was less difficult to cultivate. It also produced a strong, fruitier wine in a much larger abundance. In July 1395, the Duke of Burgundy, Philippe the Bold, outlawed the cultivation of Gamay as being “a very bad and disloyal plant” due in part to the variety occupying land that could be used for the more “elegant” Pinot Noir. 60 years later, Philippe the Good issued another edict against Gamay in which he stated the reasoning for the ban is that “The Dukes of Burgundy are known as the lords of the best wines in Christendom. We will maintain our reputation”. The edicts had the effect of pushing Gamay plantings southward, out of the main region of Burgundy and into the granite based soils of Beaujolais where the grape thrived. Gamay came a special over-cropper during the mass-production of Beaujolais Nouveau in the 1970s & 1980s. The outcome? Yeast-cultured, sulphur-heavy bubblegum juice with that bore little relation to wine and consequently badly undermined the reputation of the entire region. Growers such as Marcel Lapierre, Jean Foillard and George Descombes understood the true nature and potential of the grape, and began to make better wines accordingly, and they in turn influenced a whole new generation.

Respect the grape vine and respect the terroir and butterflies may emerge from lumpen caterpillars. Camillo Donati, a biodynamic natural vigneron who farms vineyards south of Parma, describes his approach to unfashionable Trebbiano, one of the most widely planted white varieties in Italy:

“… at that time winemakers used to plant Trebbiano for its distinctive generous productivity. Today, it has almost disappeared from our area, unfairly snubbed as a light wine of little importance. In 2004 I had my first experience in making wine from this kind of grape and, once easily overcome perplexities about its poor reputation, I noticed, as usual, how Nature, and Vine, in this particular case, is very generous if we only manage to accompany it with humility, deep respect and a lot of love along its seasonal cycles. The result is an astonishing wine, to say the least, likeable, graceful, and, at the same time, with its definite and determined scents and tastes.”

And then is the Trebbiano d’Abruzzo from Edoardo Valentini, a man once known locally as the “Lord of the Vines.” This resolute old-timer disregarded all modern conventions and wrapped his operations in a shroud of mystery, fervently guarding his production techniques from outsiders. His Trebbiano took on uncommon colours, aromas, depth, complexity, and ability to age. Valentini’s wines display a startlingly natural character, their individual quirks only enhancing their profound charm. 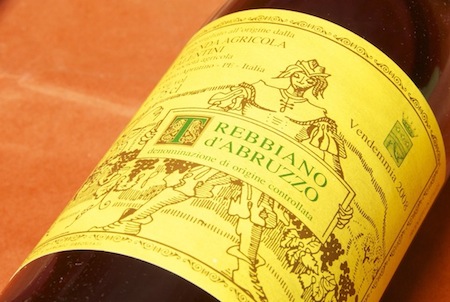 Edoardo Valentini’s Trebbiano d’Abruzzo seems to hail from another planet; no-one has a clue why the wine is the way it is – we’ve found that its optimum drinking period is 10-15 years from vintage.  Francesco, Edoardo’s son, expounded his theory to us. In the 1950s with the industrialisation of the Italian wine industry, the Trebbiano Toscana was imported into Abruzzo to supplement the local version. Being a more robust, high-yielding variety with bigger grapes it eventually entirely replaced the indigenous Trebbiano of Abruzzo (and thus became known itself as Trebbiano d’Abruzzo). The Valentini family, using records dating back to the 1860s, discovered the properties of the original Trebbiano and using massale selection (over a period of 40 years!) in one vineyard of 2.5 hectares have essentially recreated the old Trebbiano with all its unique qualities.

Indigenous grapes, the channelling of terroir, espousing singularity and identity, the rediscovery of traditional techniques (of farming, of winemaking), all give colourful diversity to the often monochrome world of wine where commercial relevance and reputation are continually bruited.

The grape variety itself is one small element in a larger picture. Respected, and linked to its place of origin, its purpose is more than a functional “varietal”, it is that which provides cultural variety, embodying the very specific DNA of the locale and the growing season.

“Wine to us is a genie, genius loci; our task is to coax it from its stone bottle. Wine’s magical capacity for evoking site, we consider an obligation, as much as a gift. Every gesture we make, in the vineyard and winery, is a summons to the spirit of place. Biodynamics, hand-based viticulture, natural winemaking – these are all means we’ve adopted better to record and to transmit, with the greatest possible fidelity, this spirit’s son…”

This process of transmission is important – the grape provides the juice, but imprinted on its skin and in its very substance is a record of the vintage and (we hope) the place itself. Remove this and then the grape variety is an incidental, the juice-provider ready to be manipulated into a commercial product.

What ever happened to… Wine Controversies?