Xarel-lo! – How you should greet a top class Cava.

X-cess – as in “Give me excess of it, that surfeiting, /The appetite may sicken, and so die”. Obvious, vulgar, over-acidified, over-oaked, heavily alcoholic, cloying wines tend to be indigestible and resistible. Three-piled hyperbole in wine tends to batter our critical faculties into submission; not only can’t you taste the fruit for the trees; but you get jaw-ache trying to ingest slowly the pneumatic properties of the Dolly Partons. Some people like this stuff, but they’ll pay for it in the end; there is, after all, no accounting for gout!

Xenoglossia – an ability claimed by some mediums, clairvoyants, etc, to speak a language with which they are unfamiliar.

Xenophon – “Here Socrates again interposed. “Well, gentlemen,” said he, “so far as drinking is concerned, you have my hearty approval; for wine does of a truth ‘moisten the soul’ and lull our griefs to sleep just as the mandragora does with men, at the same time awakening kindly feelings as oil quickens a flame.” –Symposium 2 by Xenophon

Xeres – Another name for Jerez. The word is mentioned in Gilbert and Sullivan’s Operetta “The Gondoliers”. It is part of song “Dance a Cachucha” which also includes references to Manzanilla and Montero wines.

Xerophilous – a plant tolerant of droughty conditions and an unlikely high-scoring scrabble word.

Xerxes – “Xerxes , honey, would you pour me another glass of champagne, please?” Tapply, William G, A Rodent of Doubt

Xylogenous – The art of growing wine on wood beloved of traditional Spanish winemakers.

Xynomavro – As seen in the wines of Nauossa Xynomavro is perhaps the great red grape of Greece, living up to its name which means “sour black.” A truly pucker wine. 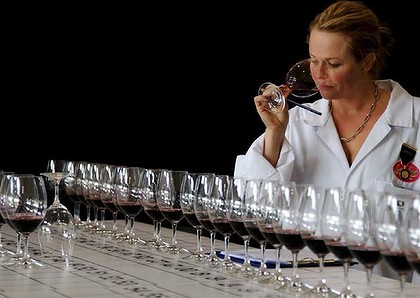 Yarra Hard – A river that flows through Victoria. Used to be known as the Birrarung when its waters ran with hops. Now is primarily composed of Pinot Noir and Chardonnay.

Yarrow Hard – Biodynamic preparation 502 (a herbal compost) is made from dried yarrow leaves.

Yeasts, Ticking – That which sulphur bomb disposal unit would seek to de-activate

Yesterfang – That which was taken at some time in the past. The last bottle of really good champagne in your wine rack. Never mind, that cheap Cava is well aged.

Yeuling – Walking around vines praying for a good harvest.

Yield – The high return a restaurant may achieve on each glass of wine that they sell.

Yquem, Chateau – or Chateau Wycombe as it is known in England, where its price is said to be Bang for Bucks.

Yurt! – The gulping sound you make when you see a Mongolian Sauvignon.

Zamzama – Said of a sommelier who oblivious to his or her customers wafts along in a relaxed style, pausing only to gaze at his/her reflection in a mirror.

Zibibbo, (the name comes from the Arab word zibib that means grape) aka Muscat of Alexandria, flourishes on the remote black volcanic plug of Pantelleria which is marooned between Sicily and the north coast of Africa. Battered by coruscating hot winds the island is home to low trained vines that yield the most fragrant, muscat-scented grapes. Here the Zibibbo is harvested in early-to-mid August to capture the acidity in the grapes (the variety can be flabby and prone to maderisation without this vital component). The colour is clear lemon yellow, the nose is pretty – white flowers and orange blossom – but totally without confection. The wine slips delicately onto the tongue, teasing with citrus and mandarin and white grape essence, fills the mid palate, but, instead of dispersing as Mu-scatty wines are wont to do, it leaves a flickering smokiness to remember it by.

Zierfandler – A movie made by Ben Stiller, starring himself, Owen Wilson and Will Ferrell, about the wine fashion industry. Derek Zierfandler and his friend, Hansel Rotgipfler, combine resources to help Gumpoldskirschen to survive attempts by the Syrian gang to plant Sauvignon in the overheating Thermenregion district of Austria.

Zinfandel – Not the last grape in the alphabet (that special honour belongs to the Austrian Zweigelt grape), however, my fellow Americans, blessed by God, under one flag, one nation, indivisible, this is your one native grape variety. It comes in two incarnations: vile blush and the big rich bastard who lives on the hill. DNA fingerprinting suggests that Zinfandel is the same as the artery-hardening-to-pronounce Crljenak Kastelanski, a little known Croatian grape variety. Whatever. Capable of producing fine wines in the right hands (Paul Draper, Helen Turley and John Williams), when yields are low, otherwise can be hot and stewed. As Byron almost said, sometimes zin’s a pleasure. Described by one wine writer as the Harley Davidson of grape varieties, I would say it is more like Jim Davidson.

Zinfandel Blush – A counterfeit wine scam was uncovered in Liverpool last week when chewing gum was found in a bottle of Blossom Hill White Zinfandel. It was said to be sickly, sticky, obnoxious and rather sweet. The chewing gum was equally unpleasant. The local chief constable of Merseyside exhorted everyone to “Calm down, calm down!”

Zombie wine – An apparently dead wine that is suddenly reanimated and tastes alive and fresh. That’s fresh and not flesh, by the way.

Zonko product – Zonko is a joke shop in Hogsmeade (Harry Potter) producing a variety of tricks and practical jokes such as Dungbombs, Frog Spawn Soaps, Nose-Biting Teacups and New-Barrel-Fermented Sauvignons.

“Pour out some wine, Zorba” I said. “Fill the glasses to the brim and we’ll drain them”.

We clinked glasses and tasted the wine, an exquisite Cretan wine, a rich red colour, like hare’s blood. When you drank it, you felt as if you were in communion with the blood of the earth itself and you became an ogre. Your veins overflowed with strength, your heart with goodness! If you were a lamb you turned into a lion. You forgot the pettiness of life, constraints all fell away. United to man, beast and God, you felt that you were one with the universe. –Zorba the Greek, Nikos Kazantzakis

Zweigelt – An alternative gift to money at Hannukah – two bottles of Austrian red wine (that may be exchanged for their cash value).

Zzzz – The natural effect of drinking too much wine and reading this wine glossary.