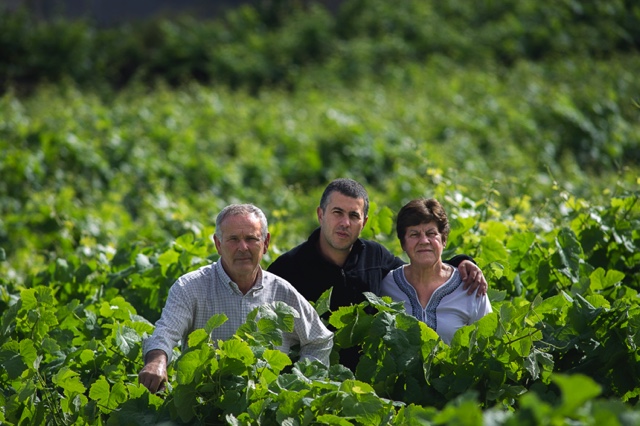 Named after the beautiful flower that grows in the Teide national park in Tenerife (which is also depicted on the labels), Tajinaste is run by the indefatigable Agustín García Farrais. He works alongside his parents, Cecila (“Chilla”) and Agustín Snr. The bodega in Valle de la Orotava was founded by Agustín’s grandfather. The family now own three hectares with the oldest vines being planted in 1914. In addition, they rent a further nine-hectares on long-term contracts from their neighbour and buy grapes to make up the balance of the production.

Having trained in Bordeaux, Agustín is a precise winemaker. He vinifies each parcel separately, which allows him to get to know the character of each vineyard and enable him to blend extremely consistent and beguiling wines year after year.

Tenerife’s climate might appear to be too hot and humid for the production of good quality dry wines, but to offset the heat, vines are planted at altitude on the slopes of Pico del Teide (the world’s third largest active volcano). The winds (vientos alisios) off the Atlantic also mitigate temperatures and bring much needed moisture. The volcanic soil imparts a wealth of minerals to the vines and was also instrumental in preventing phylloxera from taking hold on the islands. As a consequence, there is a wealth of old ungrafted vines and unusual indigenous varieties. The oldest vines at Tajinaste, for example, were planted in 1914 under the traditional trellised system unique to the Canary Islands called el cordon trenzado (the braided cord), which is a multiple cordon with a number of the vine’s branches braided together.

Tajinaste Blanco is a blend of ninety percent Listán Blanco, with 10% Albillo Criollo, added for a burst of acidity. Over half of the fruit is grown at 500 metres above sea level, with the rest grown at 250 metres. The fruit is hand-harvested and transferred to the winery in small 15 kilo crates in order to avoid damaging the berries. As with almost all of the wines at Tajinaste, Agustín vinifies each parcel separately in stainless steel tanks. One-fifth of the wine is aged in French barrels of two to three uses for two to three months. The wine is lightly fined with bentonite and is not filtered. The nose is charming and easy-going, evocative of tropical fruits. The palate has a citrus edge thanks to the presence of the Albillo Crillo. The finish is creamy and round, with a reductive mineral edge.

The Tradicion Listán Negro comes from two training styles – classic cordon and royat espalier and is vinified in stainless steel with one-fifth of the fruit undergoing carbonic maceration. A portion of the wine is aged in American oak for two to three months before release. The lovely acidity comes from the Listán Negro that grows at higher altitudes, and fuller body from the vines on the lower slopes. The nose is clean with aromas of cranberries, cherries and plums along with smoky and spicy notes. The palate is smooth with silky tannins, good minerality and acidity.